A new report says the market for wearable technology will double over the next four years. Smartwatches in particular should see strong growth, fuelled by the success of the Apple Watch.

The figures come from global analyst firm CCS Insight which estimates that 86 million smartwatches will be shipped in 2021, up from 43 million units this year. During this period, this vibrant market is expected to increase in value from around $10bn to $17bn. Interestingly, CSS Insight predicts that one-third of units sold in 2021 will be to China.

“The Apple Watch has been the trailblazer for this category. Its success prompted traditional watchmakers to enter the smartwatch market.” said George Jijiashvili, wearables analyst at CSS Insight.

“Fossil, Guess Watches and TAG Heuer were among the first to embrace the opportunity.” 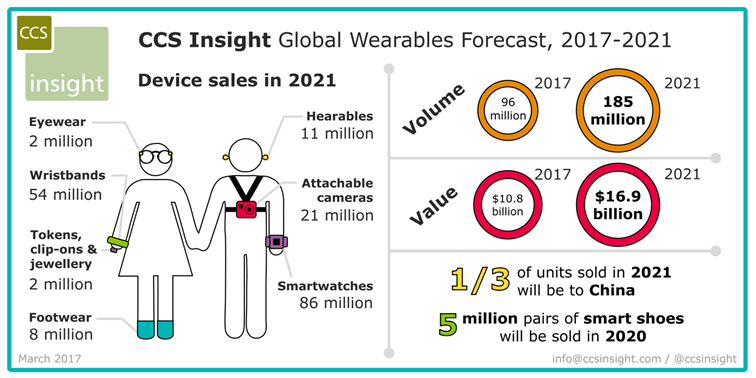 “It’s clear that companies like Apple and Samsung have recognised the success of performance fitness watches and have implemented more and more fitness features into their own smartwatches to broaden their appeal.” Jijiashvili added.

“There’s currently an air of cautious optimism among smartwatch makers, especially as sales of fitness bands appear to have stalled”.

Around 9% of full-touch smartwatches will be cellular-enabled by the end of this year, growing to 12% by 2021, the market research company predicted, adding that it expects Apple to release a cellular-enabled version of the Apple Watch in 2017.

Despite recent questions from some journalists whether wearable tech has had its day, it seems the market has a healthy few years to look forward to.