The 2019 US Open starts today, the perfect time for a re-cap of tennis gadgets and trackers to improve your game.

The tennis technology landscape is exploding with connected gear. Best of all, these products are accessible not only to professional players but also to aspiring amateurs and hobbyists.

This is our overview of connected gear for tennis that has the potential to take your game up a notch.

You would have never guessed it by looking at them, but Babolat’s has a range of rackets that come with built-in sensors. There is also a matching app that records details of your playing performance.

The detail, if we are happy to accept it is largely correct, is fascinating. There are numerous broad categories to digest, including time the ball is in play, longest rally, shots per minute, and even an estimation of energy spent. Then you can delve into individual strokes—forehands, backhands, serves, and smashes—to see how many you hit, and then go even deeper to see your power, spin, and proficiency. It’s a lot of fun to take apart.

Unlike some of its competition, you can attach Zepp’s tennis sensor to the end of any racket. From there it will monitor key performance metrics so you can improve your technique on the court.

There are some key differences between the Zepp Tennis 1 and 2. The new device offers a highlight camera, additional performance metrics and enhanced social features. It also features longer battery life, a quicker charge time and more internal smarts.

You attach the little gadget in one of three ways. Via the Flex Mount which works on any racket and can be reused, the Pro Mount which can be stuck on the butt cap with a stick-on holder, and an Insert Mount which only works on selected models. Zepp captures over 1,000 data points per second, and wirelessly sends the information to your smartphone or tablet via Bluetooth.

The device tracks forehands, backhands, serves and smashes, including the power generated with each stroke or over the course of a whole game. Zepp also measures top-spins, slices and flat shots and records the amount of time you spent actively on the court. The statistics show you how often you are hitting the ball in and around the sweet spot. Ball speed and ball spin speed are additional metrics that are only available on the second generation device.

Zepp has gone big on the social aspect and video editing tools. If you’re the sort of person who likes to make videos of your play, you’ll be happy to know the sensor comes with lots of tools for this purpose.

In/Out is in a class of its own in terms of what it can do. The GoPro like device can be fastened to any tennis net post in less than a minute to detect in real-time which side of the line the ball lands. It does this thanks to the same algorithms that provide line-detection for self driving cars. You essentially get your own personal ‘Hawkeye’ system.

Its line calling is not perfect, and operates with a margin of error of 20-30 millimetres. While this may not be precise enough for professional tennis players or serious amateurs, it is a useful addition for recreational play. There’s also a handy replay function with a snapshot of where the ball landed. Then the players can decide for themselves on the winner of the point.

Perhaps the more useful function is the 1080p video replay of your matches. You’ll get a recording of both sides of the court. Ideal for analysis of form or to capture a record of your wins. Add to this detailed stats analysis such as shot placement with percentage by zone as seen on TV, calculated for both players.

This neoprene wristband comes on the heels of the Babolat POP wristband, its less sophisticated cousin.

Similar to POP, the ‘Babolat and PIQ’ is a lightweight wristband-mounted sensor that records your stats. PIQ says its device tracks data using 13 different axes and includes NFC and Bluetooth Low Energy. Despite the differences in price and features, PIQ says both models share the same user community.

To use the gadget, simply place the tracker inside the wristband, turn it on, and play. ‘Babolat and PIQ’ will then track many metrics of your shots including velocity, height, air time, G force, amplitude and trajectory. Best of all, the information can be seen on the wristband display in realtime giving your playing experience a new dimension. For more detailed stats, head over the the smartphone app after the game.

PIQ’s sensor is actually a multi-purpose unit that’s adaptable to other sports. In fact, the company recently launched golf, kite board and ski applications. They all use the same core unit, but sell with separate accessories.

Babolat Pop is the world first connected tennis wristband. Made of breatheable neoprene, the device was created in collaboration with French tech outfit PIQ back in the not-so-distant 2015. Simply put the wristband on your dominant wrist, slide in the sensor and start tracking your game.

Pop collects data about players’ performance, including forehands, backhands, smashes, volleys, serves, spin, racquet speed, shots, playtime, activity score, PIQ score, best rally and rate (shots/minute). The unique PIQ scoring system combines your swing speed, spin and style (the “fluidity” of your stroke) into one number that you can use to track your own game.

Qlipp is one of the lightest sensors on the market. It attaches to any racket to track your game while at the same time acting as a dampener.

To use it, simply turn on the sensor, the bluetooth on your smartphone, and launch the app. Your session is now being recorded in real time. It is worth noting that you do need to bring both your Qlipp sensor and your smartphone into the court in order for your measurements to be recorded and saved. However, your smartphone does not have to be near as the sensor has a detection range of 40m- 50m (whole court).

The device measures every part of your stroke (forehand, backhand, and serve), including ball speed (it uses the rackethead speed to derive the estimated ball speed), spin (top spin, slice, flat), and sweet spot accuracy of each shot.

After the session, you can play back and review every stroke in slow motion (if you have switched on the video function), allowing you to gain more insight into your technique. You can even set the device up to call out stats during the game. And, for added convenience, there is a Qlipp Apple Watch app.

The HEAD tennis sensor comes already integrated with the racket or as a separate attachment. The sensor itself features a flat design and comes in at only 7 grams. In fact, it weights exactly the same as the standard HEAD Cap, which ensures you get the exact same feel on the court.

In Play mode the sensor keeps tabs on your ball speed, spin and sweetspot. You also get a breakdown on the number of forehands, backhands, slices, volleys, smashes and serves. The Train mode allows you to choose from a broad range of sessions to boost your forehand, backhand or serve game. The Compete mode gives you the option of connecting up to four sensors to one device so you can compare stats after the match. Finally, the 3D Serve option provides interactive feedback on serve speed and form.

Some two years in the making, Slinger is designed to resemble an oversized tennis bag. You can put things in it such as your racket, a water bottle, towel and more. It even has a USB port for charging your smartphone while practicing. Carry it on your back as you would a normal tennis bag, or just pull it along as a trolley. The bag holds 36 balls when closed and 72 when open.

That’s all very nice. But the really cool thing about this bag is that it can hurl balls in your direction at speeds ranging between 10 and 45 miles per hour. You control the speed and the gizmo can be set to launch shots at a variety of angles and elevation modes. The feed rate ranges from 2 to 10 seconds. And if you set it to low speed and low feed, it acts like a ball boy – useful for practicing serves, for example.

A ball retrieving Roomba of tennis courts? Why not.

Perfecting your tennis shots takes countless hours of practice. With that, comes the tedious chore of picking up hundreds and hundreds of tennis balls. Why bother when Tennibot can do this job for you. The robotic tennis ball collector uses multiple sensors and a camera to detect and quickly sweep up balls around the court.

You can let Tennibot work autonomously using the camera station which easily attaches to a net-post. Or use the accompanying smartphone app to let the robotic tennis ball collector know where on the court it should clear. The removable bucket can hold up to 80 tennis ball at a time. 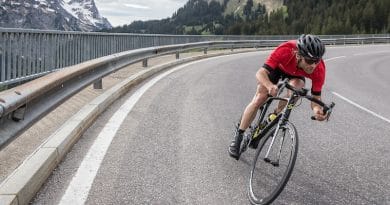 Cycling apps you should already have installed 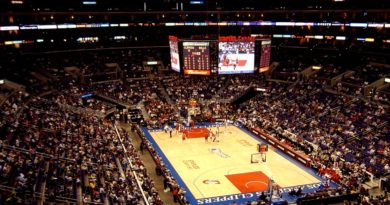 NBA says no to in-game use of wearable technology 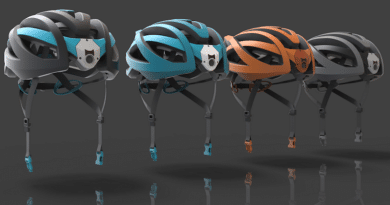 Cyclevision: the bike helmet which gives you eyes in the back of your head