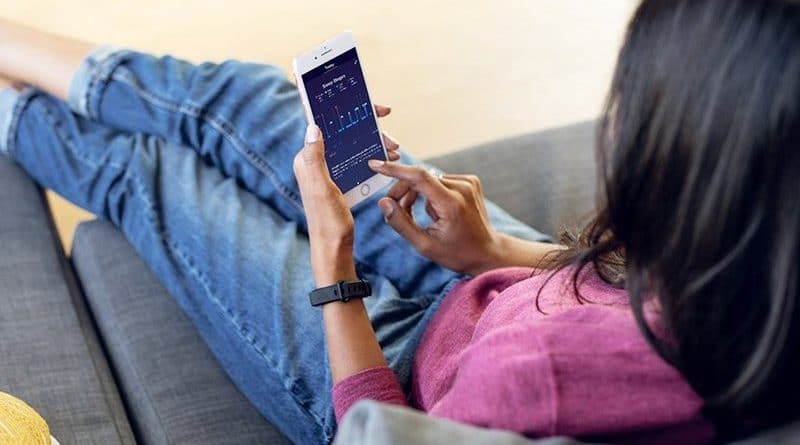 Tracking information such as movement, steps and heart rate are all part of the quantified self movement which has gained in popularity enormously. The right wearable will be based on your individual needs; whether it’s step counting, sleep tracking or 24/7 heart rate tracking, there’s something for everyone.

But do you actually know what sensors are hidden inside the Fitbit or Garmin fitness device sitting on your wrist or your Apple Watch? Read on to find out.

3 axis accelerometer sensors are fairly common these days and can be found in almost all activity trackers. This is an electromechanical device that is capable of sensing gravity as well as linear accelerations. The sensors track movement in each direction and can determine the body’s orientation, inclination and tilt as well as take inertial measurements of position and velocity.

An altimeter senses changes in altitude using atmospheric pressure. The total flights of stairs you have been climbing will be summed up and computed as a factor in your calorie count. This makes your calorie output more accurate.

Ambient light sensors detect the time of day. They narrow the light spectrum so that only light forms noticeable to the human eye are identified. That light is converted into a digital signal and then broadcast to the processor inside the fitness tracker. This can be used, for example, to make the screen of the wearable brighter or darker, thus saving battery life.

A barometer measures and displays atmospheric pressure. It tells you whether it is going to be a sunny or rainy day by measuring the pressure exerted by the atmosphere above it. This measurement of pressure can also be used to estimate altitude.

Bioimpedance sensors measure the resistance of bio-tissue to a tiny amount of electric current, capturing a wide range of physiological signals. They use two outer electrodes to drive tiny electrical energy and two inner electrodes pick up changes in voltage.

Traditionally, bioimpedance analysis is used in clinical settings to measure body composition, such as body fat with respect to your lean body mass. Fitness trackers use them for tracking heart rate, sleep, respiration rate, hydration and skin galvanization. Smart scales use them, too.

Capacitive Proximity Sensing can be used to wake the device from sleep to light up the user interface. Power consumption is lowered by incorporating a capacitive sensor to only turn the device on when it’s worn. The Apple Watch uses it to turn the screen on, as do many other wearables.

Found on some sports watches, a compass is an instrument containing a magnetized pointer which shows the direction of magnetic north and bearings from it.

An ECG sensor records the pathway of electrical impulses through the heart muscle. With each beat your heart sends out an electrical impulse. Although this electricity amount is very small, it can be picked up with ECG (EKG) electrodes attached to the skin.

It’s a term for technology that’s controlled by different body movements such as waving the wrist or moving your fingers to grab something. Much of the gesture tech is still being developed, but what is to come makes this area worth keeping track of in the future.

GPS ensures that all your running stats are accurate. It uses lots of battery and finding a signal can sometimes be hard. However, the results are definitely worth it. It works by connecting to  series of GPS satellites. The receiver gathers the signals, calculates the distance to these satellites, and uses the information to work out its location.

Gyro sensors, also known as angular rate sensors or angular velocity sensors, are devices that sense angular velocity. They help in movement tracking and improve accuracy when you are on the go. The more axes, the better.

In all probability, your fitness tracker or smartwatch is dependent on your smartphone for a cellular signal. Unless, that is, you happen to have one that’s Long-Term Evolution (LTE) enabled. LTE is a standard for high-speed wireless communication, based on the GSM/EDGE and UMTS/HSPA technologies. If the smartwatch on your wrist happens to be LTE enabled, that simply means that is has a built-in cellular connection.

This is a sensor that measures magnetic fields, primarily the magnetic field of the earth. A magnetometer can be used as a compass, to fix your movement to the coordinate system of the earth and pinpoint your exact movements. This is helpful in detecting the orientation of a user in relation to the Earth’s magnetic North.

The optical heart rate sensor sits within the fitness tracker and shines a small light against the skin. When your heart pumps, the blood moves through your veins at a quicker rate, causing less light to be reflected back. The wrist worn device will then calculate your heart rate using an algorithm. The current trend may be to move heart-rate monitoring away from the chest and over to the wrist but accuracy at these locations is not as good.

Pulse oximeter sensors measure how well oxygen is sent to parts of the body furthest from your heart (such as arms and legs). It involves a light source, usually LEDs, emitting light into the tissue and a photo detector to collect light reflected or transmitted from the skin. Though they became widespread in the 1980s, it is only recently they became more affordable.

This sensor monitors temperature changes. It provides a reading of your body or the external temperature.

UV sensors tell the fitness tracker when you might be absorbing dangerous UV radiation and warn you to seek shade if you are likely to burn.

Fitness wearables may have started off no more advanced than a pedometer tracking only movement, but with each passing year they are going further. From motivating you to improve your exercise routine to alerting you of possible illness. In the not too distant future, the sensors will go beyond basic health and fitness functions, to become essential improvement systems that will save lives.

One thought on “What’s inside a fitness tracker?”