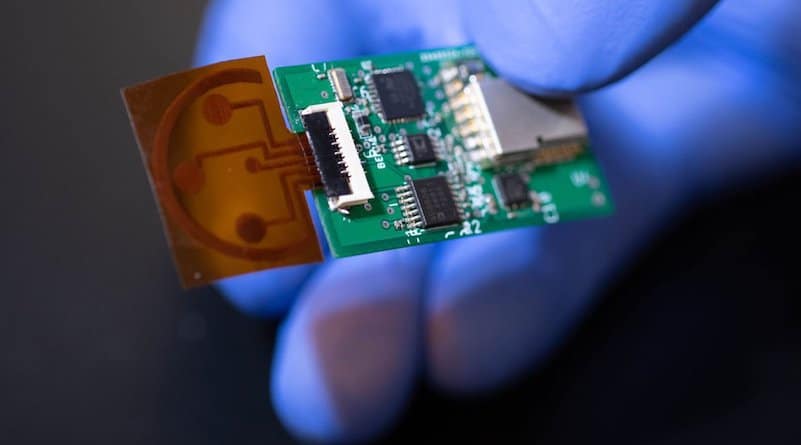 Scientists at the California Institute of Technology (Caltech) have developed a wearable sweat sensor that can accurately measure cortisol levels in the body.

Sweat is often viewed as the next frontier in wearable technology. Every drop of this liquid tells a story about what is happening inside the body. Sweat provides information on dehydration, stress, muscle cramping, high cholesterol, depression and even blood glucose.

It can also be used to measure cortisol, often called the “stress hormone.” High levels of the substance for too long can cause health issues such as high blood pressure, sleep disturbances, type 2 diabetes and more. This is why its important to keep your stress levels low.

There are fitness trackers and smartwatches out there that quantify the levels of stress. They do this by measuring heart rate variability (HRV) which is the variation in the time interval between your heart beats. The higher the value the lower the stress. Unfortunately fatigue from intense exercise effects HRV in the same way so there is no way to distinguish the cause.

But something better may be around the corner. Researchers from Caltech have developed a sweat sensor made of graphene that directly measures cortisol levels in a person’s body. The tech contains a plastic sheet at the end with tiny laser generated pores which collect sweat. This goes through an antibody (a type of immune system molecule), that can detect cortisol as it is very sensitive to the substance.

Assistant professor of medical engineering at Caltech Wei Gao was the main author of the paper called “Investigation of cortisol dynamics in human sweat using a graphene-based wireless mHealth system“. It can be found in the April issue of Matter, the content studio owned by Twitter founder Evan Williams.

The technology works in real-time and is mass producible. It is also inexpensive, non-invasive and accurate giving it the potential for widespread use not just for measuring stress but also for detecting anxiety post-traumatic stress disorder and depression. All of these are correlated to elevated cortisol levels.

“Depression patients have a different circadian pattern of cortisol than healthy individuals do,” Gao says.

“With PTSD patients, it’s another different one.”

Plus the analysis is done very quickly. Unlike typical blood tests the results are available in only a few minutes.

“Typically, a blood test takes at least one to two hours and requires stress-inducing blood draw. For stress monitoring, time is very important,” he said.

“We aim to develop a wearable system that can collect multimodal data, including both vital sign and molecular biomarker information,” he says.

The technology was tested in two different ways. The first involved monitoring a person for six days around the clock. Cortisol levels rise and fall on a daily cycle, which higher values typically experienced in the morning. Data dished out by the sweat sensor correlated with this natural cycle. The second approach involved stressing the participant with high levels of exercise in one test and ice water in another. Both are correlated with high levels of cortisol, with the results showing exactly this.

Will the technology make it into your next Garmin or Apple Watch? Only time will tell. For now Gao is looking to integrate the sensor technology into a system for monitoring the stress and anxiety of astronauts.

“We aim to develop a wearable system that can collect multimodal data, including both vital sign and molecular biomarker information, to obtain the accurate classification for deep space stress and anxiety,” Gao says.

The science of sweat is still in the early stages although clinical uses trace back to the 1950’s. We wrote a few months ago on Gatorade’s efforts to come up with a sweat patch for commercial use. Their product analyzes differences in color caused by chemical reactions to monitor both the level of dehydration and the concentration of chloride in the body. It is expected to hit the market this summer.