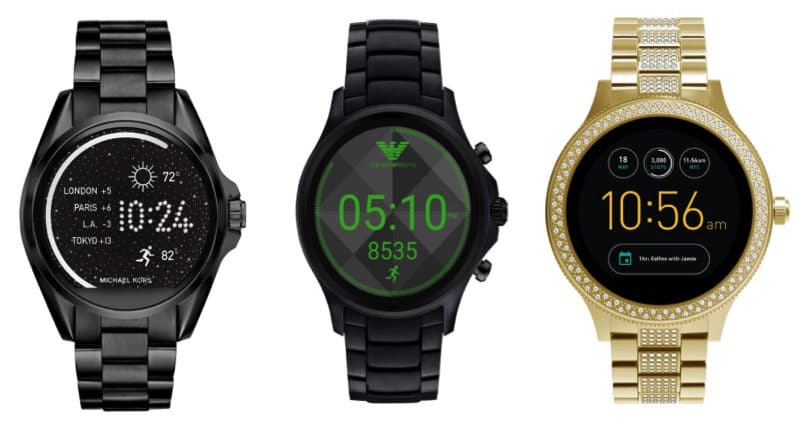 Fossil is planning to double its wearables production this year to an unmatched 300 new products, the company confirmed today. This will include watches across 14 brands including Misfit, Diesel, Emporio Armani, Michael Kors and Fossil. New Fossil Group brands entering the wearables space in 2017 include DKNY, Marc Jacobs, MICHELE, Relic and Tory Burch.

Since launching its first smartwatch in Fall 2015, Fossil Group has brought to market more than 150 touchscreen smartwatches, hybrid smartwatches and activity trackers. The company is now showing off a variety of new designs at Baselworld, the world’s leading watch and jewelry fair.

We won’t go into detailing every single model, but the Diesel, Emporio Armani, Fossil, Michael Kors and Misfit touchscreen smartwatches all run Android Wear 2.0, sport high-resolution full-AMOLED displays and are powered by a Snapdragon Wear 2100 chip. Users can personalize the watch faces by choosing from millions of branded dial designs, customise key information to appear on the watch face, create shortcuts to play music, call a car or monitor activity goals. Third-party apps can also be installed.

“Our new touchscreen smartwatches are better in every way – from the screen resolution and fast, wireless charging to the case size and branded micro-apps,” said Eric Anderson, executive vice president of Portfolio Brands, Fossil Group.

“And, while 2016 was a banner year for our smartwatch innovation and introductions, the tangible results of Fossil Group’s innovation are creating tremendous opportunity for our wearables in 2017.”

Fossil has been one of the most aggressive companies in the wearable market. Since launching its first smartwatch in late 2015, the company has released more than 150 smartwatches, hybrid smartwatches and activity trackers throughout 40 countries. The company says, its 2017 line-up of watches is set to arrive later this year in time for the holiday season.