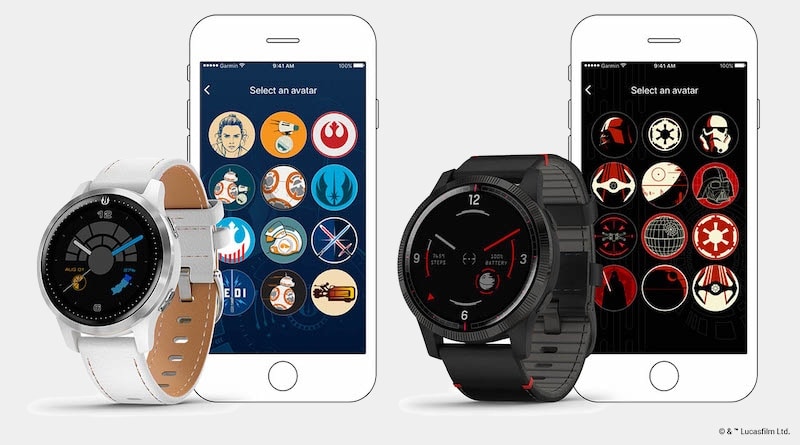 Garmin is preparing to feel the force with new smartwatches in its Legacy Saga Series. The merchandise is being released as part of next week’s Triple Force Friday – an event that marks upcoming releases: Star Wars: The Rise of Skywalker, The Mandalorian, and the game Star Wars Jedi: Fallen Order.

The watches borrow the design and functionality from the Vivoactive 4. This is very much along the lines of what Garmin has done with its Legacy Hero Series. Released about a month ago it consists of two special edition timepieces, Captain America: The First Avenger and Captain Marvel. The first comes in a 45mm, the second in a 40mm case. The special edition watches differ from the Vivoactive 4 in that they are built from materials influenced by the superheroes, they come with some new watch faces and goal animations and there are Marvel-themed challenges. They also lack some functions such as pool swim metrics and underwater wrist-based heart rate.

We can expect more of the same with the new Legacy Saga Series. Once again we have a 45mm and 40mm iteration. Inspired by Rey one of these comes with a white case and white leather band. On the back of the watch is the engraving “Nothing is impossible.” The other one is Darth Vader-themed. As you’d expect, it’s a more appropriate black and comes with the inscription “Rule the Galaxy.” The Garmin Connect app screenshot reveals the ability to choose an avatar, which will determine what you see on your watch display.

Outside of the look, you still get an excellent fitness watch. On top of the basics you get Pulse Ox, Body Battery, Garmin Pay and Connected GPS. Battery life is around a week in normal mode and up to 6 hours with GPS and music switched on.

The company already has one Star Wars-inspired device – a Vivofit jr. 2 for kids. Apparently, some new themes will be added to this starting October 4th. These watches will encourage your kids to stay active with new adventures in the app that reveal as they reach their daily 60-minute activity goals.

The Legacy Saga Series is set to land this November, with both watches in the collection priced at $399. Just like the current edition, the new Vivofit Jr 2 will retail for $69.99.