While people have fought in hand-to-hand combat since before the dawn of history, the origin of boxing as an organized sport may be its acceptance by the ancient Greeks. They believed fist fighting was one of the games played by the gods on Olympus, thus it became part of the Olympic Games since 688 BC.

Even though the merging of technology and boxing is still in its infancy, a few early contenders attempting to redefine how we approach the sport have emerged. This is our list of the best boxing trackers. 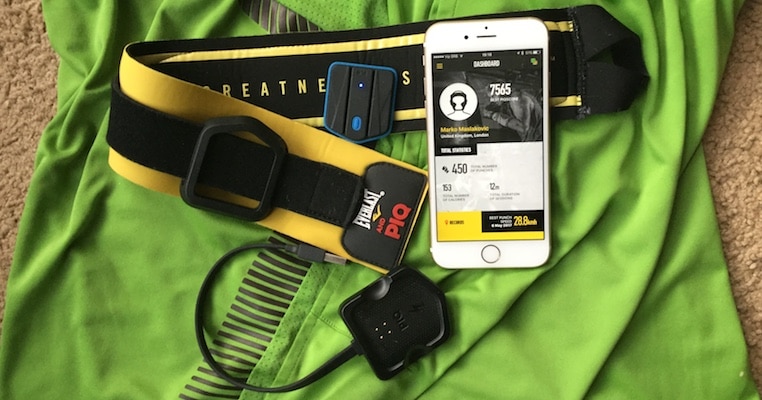 Everlast and PIQ is designed to be used for shadow boxing, heavy bag work, mitt work and light sparring. The driving force of the system is a nano-computer which houses a set of built-in sensors.

The technology was developed after studying motions of thousands of boxers. The accelerometer, gyroscope, and an altimeter inside the device collect more than 190,000 points of data per minute to dish out a plethora of stats.

Information provided includes the speed of your punches, the force of your punch at impact and the retraction time of your hand. You are also assigned a unique value called PIQSCORE which is based on all three of these metrics. Other stats include the total number of punches, calories, boxing time, punches broken down by type, records, progression displayed via charts and much much more.

Along with tracking results, the app also provides actionable information on how to improve in areas where you may be lacking. To this end it also identifies what the company calls, your “Winning Factors”. These are key aspects where you are particularly strong.

We’ve spent some time with Everlast & PIQ and found that it works as intended. It’s not cumbersome to wear and it goes beyond just displaying data by providing much more meaningful analysis. Regardless of whether you are just shadow boxing for exercise or someone with years of experience, it can be a great addition to your routine.

Hykso’s punch trackers track your hands’ movement 1,000 times per second to detect the number, the type, and the velocity of all your punches. Install the trackers on the top of your wrists, underneath 2 or more wraps of your wrist wraps and you’re good to go!

The Hykso app allows you to view your punch output in real time and measure your daily, weekly, and monthly progression. The App tracks punch count and punch speed. You also get an intensity score, which is a measure of your physical output so you know how combat fit you are. Hykso says its trackers record over 6,000 data points for every single punch, giving you great insight into your technique.

Moov Now is a one of a kind wearable fitness coach that actively monitors your activity and advises you in real time how to get the most from your workout. Similar to many other fitness trackers, Moov tracks your daily activity and sleep — but rather than steps, Moov measures movement within 3D space.

The device pairs with an app to train users on five sports — running, cycling, swimming, cardio boxing, and a seven-minute bodyweight workout. The wearable’s modular design allows the gizmo to be worn where it is most beneficial for each sport it tracks. For example, you can wear it on your ankle or shoe for running, or on your wrist while kickboxing or swimming.

The Cardio Boxing workout supports two Moov Nows, one on each wrist for a more complete workout experience. The sensor will tell the smartphone app if you’re not punching correctly, making sure you get a full workout. Are your feet in the correct position? Are you keeping your hands up and striking as prompted?

All in all, this fitness tracker aims to teach you the concepts of a healthy life. It provides a fun way to work out and will appeal both to the average person and hard-core fitness enthusiast.

An Indiegogo funded project, StrikeTec is a wearable for boxing and MMA fighting that seeks to eliminate guesswork and optimize training. Whether in the ring, the gym, working out with a partner or solo you’ll get real-time feedback via your mobile app on your training session.

To use the wearable, you’ll need to secure the sensor under your wrist wrap or glove velcro. Once paired with the smartphone app, the little gadget automatically measures your strike data, including your speed, power, count, type or combination, as it happens. At the end of your session, you’ll get more stats such as your average speed, average power, most/least popular strike combinations, round by round performance, endurance, fatigue and more.

StrikeTec is aimed for those who want to use boxing or martial arts for exercise. It can help you, your family and friends get out of the chair, off the couch and competing against each other with safe and easy to execute exercises. You’ll also have access to StrikeTec’s growing community of coaches, athletes and fans.

Corner is another new kid on the block. It comes in the form of two small wireless trackers which you need to attach to your hand wraps. Download the accompanying iOS or Android smartphone app and you’re set to go.

Every punch, block or combination is displayed in real time on your smartphone allowing you insight into your performance as you box. You’ll get detailed info on your punch rate, speed and power. The system also finds trends in the punches and combinations you throw, and at the end of the session Corner will provide you with a fight fatigue score.

This one is a bit different from other boxing trackers on this page. It’s also the least expensive. This is because it doesn’t add any new hardware. Instead, it converts your smartphone into a punch tracker.

To use, stick your smartphone into the enclosure of the belt (which is included in the premium plan). Alternatively, you can use a running armband as long as it’s long enough to stretch around the punching bag. The video below will give you a clearer idea how it attaches.

The gizmo uses existing motion sensors in your smartphone to track your strikes and follow your overall progress. Statistics such as total hits, force percentage and an overall workout score will be at your disposal.

There are also guided workouts which aim to improve your fighting style and technique. Put a headset on and simply follow the audio instruction.

The design of the gear has inherent limitations. It only tracks bag work and not your hand motion. Nevertheless, this is a simple and inexpensive way to make bag work more interesting.

Maybe you don’t want to be bothered to head out to your local boxing gym. Well, now you can unlash your inner fighter in the comfort of your home. FightCamp is a smart training system for boxers that consists of a punching bag, gloves, hand wraps and an exercise mat.

The whole thing is pretty compact and mobile. It takes up just 8’ x 4’ of living space and can be adjusted to 6’ x 4’ to accommodate smaller rooms. The techy bit are the sensors which slip into your gloves to keep tabs on punch volume, speed and output. All this is displayed on a smartphone or tablet, allowing you to know how hard you are hitting and working out in real-time.

The company operates a monthly rental package which starts at $39. There are also financing options which allow you to buy now and pay later.

This one is sometimes called the Peloton of boxing. Therefore it is no surprise that it will set you back a hefty $1,500! You’ll need to create a bit of space, though, in your home or garage. The thing takes the form of a 6 foot tall, stationary platform.

If you imagined something with a traditional punching bag attached, think again. Instead you get a target with 6 LED lights. The goal is to hit the one that is shining green. The lights tell you when and where you’re meant to punch.

The sensors inside LiteBoxer track your power and accuracy in real-time and show them on your smartphone or tablet. There are also guided challenges and workouts. All of this is accompanied by LiteBoxers patented technology which matches your punch combinations with dance and pop music.