Fitbit, the leading global wearables manufacturer, has a wealth of data at its disposal. From time to time, the San Francisco company taps into this information to bring us some interesting insights. This time, we bring you a list of the most active cities in the United States. The list is based on aggregated data from over 10 million Fitbit users in 2015.

For those of us who never leave home without a fitness tracker, we are well aware that 10,000 steps per day is the typical goal for a day’s activity. It takes over 2,000 steps to walk one mile, so 10,000 steps would be almost 5 miles. But is there is no real medical reason to embrace this number. Depending on which official source you go to, it is generally recommended to aim for a number between 8,000 and 10,000.

Essential reading: Do you really need 10,000 steps per day?

According to the Walking Behavior Laboratory at Pennington Biomedical Research Center, the typical American takes about 5,900 steps a day. Interestingly, Fitbit’s new data shows that people motivated enough to use activity trackers are generally getting close to the recommended numbers. 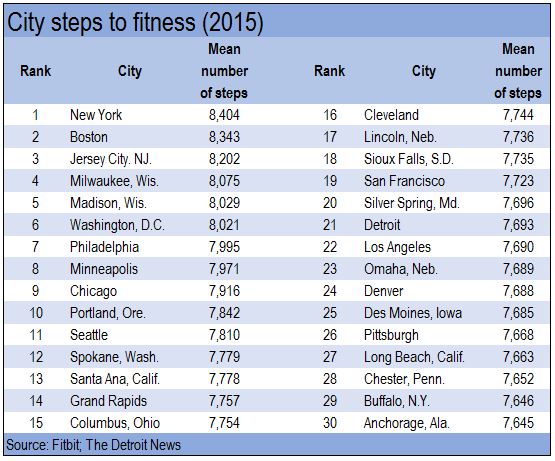 The Big Apple tops the rankings and is the USA’s most ‘walkable’ city. The city is a metropolis unlike any other. One in 10 New Yorkers walk to the office every morning and more than a half of households don’t own a car. They instead opt for public transit, or walking. The city also hosts some green spaces such as Central Park and North Woods which present a wealth of workout opportunities.

Boston comes in close second. Residents paddle and canoe their way to a 1st class workout alongside Cambridge’s famous rowing clubs on the world-famous Charles River. Boston Common, located near the Financial District and Beacon Hill, is the oldest public park in the United States. Along with the adjacent Boston Public Garden, it is part of the Emerald Necklace, a string of parks designed by Frederick Law Olmsted to encircle the city.

Another city from the East coast tops the rankings. Jersey City, part of the New York metropolitan area and one of the most ethnically diverse cities in the world comes in third place. Of all Jersey City commuters, 8% walk to work, and 47% take public transit. This is the second highest percentage of public transit riders of any city with a population of 100,000+ in the United States, behind only New York City. More than 40% of Jersey City households do not own an automobile, the second-highest of all cities in the United States.

Sometimes overlooked as a form of exercise, walking can improve your health, help you build stamina and burn excess calories. Research suggests that the more activity you do the better. So go on, challenge yourself. Help your city top the rankings next time around!