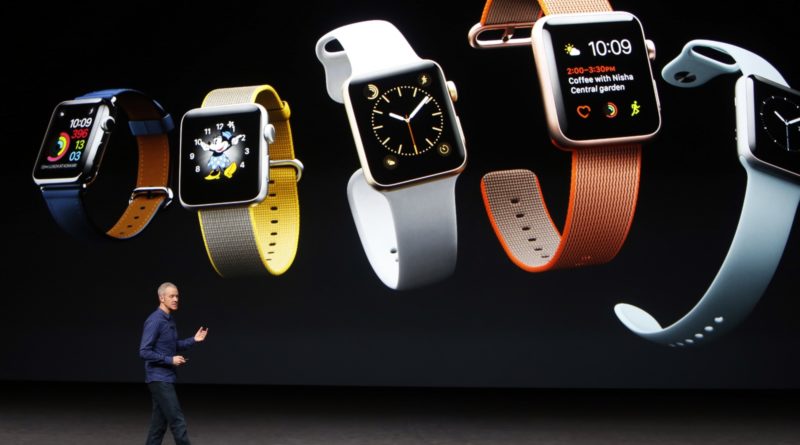 More than a year since its original watch was announced, Apple held an event in San Francisco today to launch the next generation of its popular smartwatch. The Apple Watch Series 2, as its called, delivers solid improvements over its predecessor, including water proofing up to 50 metres, on-board GPS, a 50% faster Duel-Core processor, a better display and a few other updates.

Apple has retained the square look of its original device, but the screen is brighter now and the graphics are twice as sharp. At 1,000 nits of brightness, Apple says this is the brightest display its ever shipped. In order to make the new watch swim-friendly, the design has been updated with seals and adhesives to stop water getting in.

“You can wear it whether you’re swimming or surfing”.

Under the hood, Apple has upgraded its innovative System in Package (SiP) with the S2 chip. This boosts performance by up to 50%. A new GPU has also been added, which delivers up to two times greater graphics performance.

There will be a wide variety of styles and colours to choose from, with casing including aluminium, stainless steel and a new ceramic edition which is four times harder than stainless steel.

As mentioned, the big news is that the watch is now water resistant up to 50 metres and can be used for monitoring open and pool water swimming. The company has developed all-new algorithms to count laps, track average lap pace and auto-detect stroke type to measure active calorie burn. The model has been tested with machines to prove it can withstand constant use in the pool or sea.

Apple has attempted to make the watch a more serious rival to Garmin and Polar this time around by including built-in GPS. This means the watch will record precise distance, pace and speed for outdoor workouts such as walking, running or cycling, without needing an iPhone.

Apparently GPS connectivity is quick as the watch uses a combination of Wi-Fi, GPS and locally stored satellite data to quickly identify your location. Once you have completed your run, you will be able to view a colour coded (to show variations in speed) route map on your smartphone.

Other fitness improvements will stem from the new watchOS3 operating system which offers better performance and a Breathe app designed to encourage users to take a moment in their day to do deep breathing exercises for relaxation and stress reduction. The Activity app will also include social sharing options so you can compare and compete, keeping friends and family motivated. WatchOS3 will be available for download on September 13th.

“We’re thrilled with the response to Apple Watch and how it’s changed people’s lives. We are committed to fitness and health and think our customers will love the new capabilities of Apple Watch Series 2,” said Jeff Williams, Apple’s chief operating officer.

As with the original model, the watch will be available in two different case sizes, 38 mm and 42 mm. You can choose from gold, rose gold, silver or space gray aluminum, or silver or space black stainless steel cases paired with a wide variety of bands starting at $369. The new ceramic edition starts at $1,249, Apple Watch Nike+ starts at $369 and Apple Watch Hermès at $1,149 (all US prices).

The original Apple Watch has received mixed reactions since its launch last year. The latest figures from IDC show that Apple has lost some of its share of the global wearables market in recent months. The new watch delivers solid improvements over the original device, but only time will tell whether this is enough for Apple to begin closing in on Fitbit.

The watch is a little pricey to buy purely for its health and fitness features. And this is a very big problem when viewing Apple’s device as a fitness wearable. Even with these updates, it may be too basic, and too expensive, to be considered as a rival to some of the dedicated fitness trackers on the market.

However, as the Apple Watch offers so many other things in addition to being a fitness tracker, its health and fitness features should be viewed as a bonus rather than the main reason for purchasing this device. As a fully featured smartwatch, there are few wearables on the market today that can rival Apple.