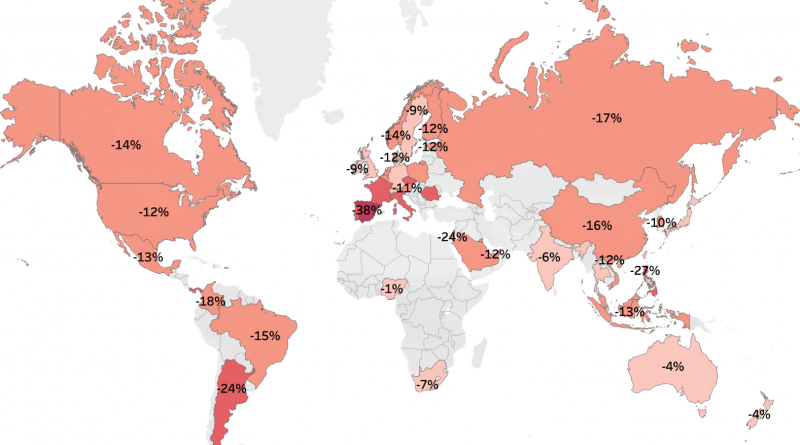 Fitbit has published data showing just how much global physical activity levels have been affected by the COVID-19 pandemic. A decline can be seen in most countries.

The company has tapped into its global user-base of more than 30 million people to arrive at the figures. The weekly data was compared to the same period in the previous year. What this shows is a clear fall in activity levels from the beginning of the year to March 22nd. You can see a summary of the figures in the map above (click on the image to zoom).

Now, this can be seen as a positive in the sense that people are staying at home and abiding my government social distancing measures. The negative is that most are finding it difficult to maintain usual activity levels.

The data varies by country, most likely due to the severity of measures implemented in each country. Not surprisingly, Europe is currently showing the biggest decline as the outbreak has shifted to the Continent in recent weeks.

The table below shows a breakdown of European activity levels for the first 12 weeks of 2020. Spain and Italy, which have introduced the most drastic social distancing measures, have seen activity levels plummet in March. Other countries, such as Portugal, Romania, France and Czechia are not much better. Falls can be seen in every European country under observation, and they range from 7% to 38% in the week ending March 22nd. 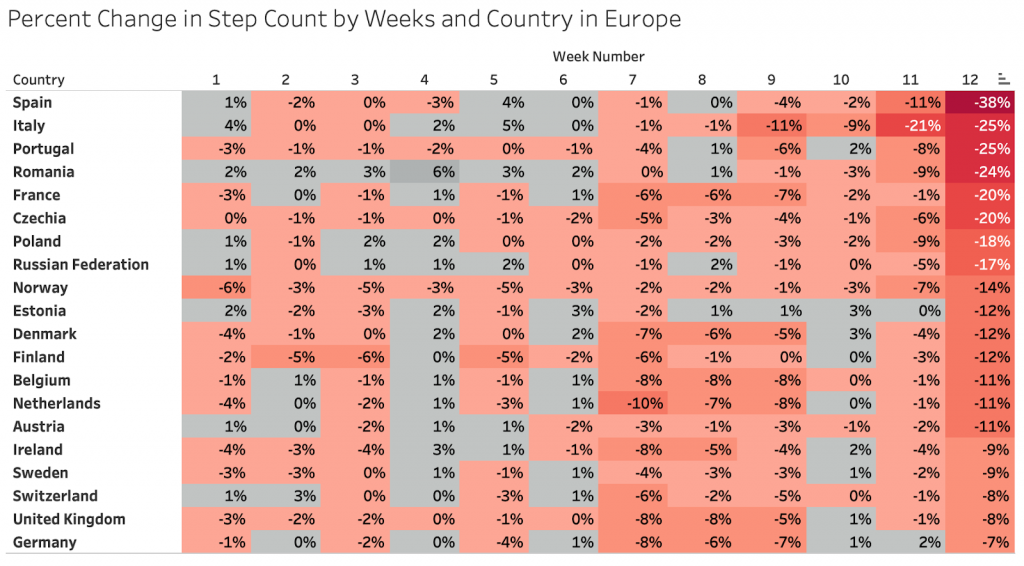 The figures for the US show a 12% decline in activity levels during the week of March 22, as compared to the same period last year. As the number of infected has increased since then and is still climbing, we expect the decline in physical activity levels to continue. This is particularly the case in metropolitan areas, as shown in the chart below.

There are reasons for optimism, though. Asian countries were the first effected by COVID-19 and are over the worst, are seeing step counts rise again. Examples are China, Japan and Hong Kong.

For now, those in the US and Europe will need to come up with creative ways to stay active with the current stay-at-home measures. Something that might help is Fitbit Premium. The company is offering certain pieces of content for free in the Fitbit app, while for new users the free trial has been extended to 3 months.