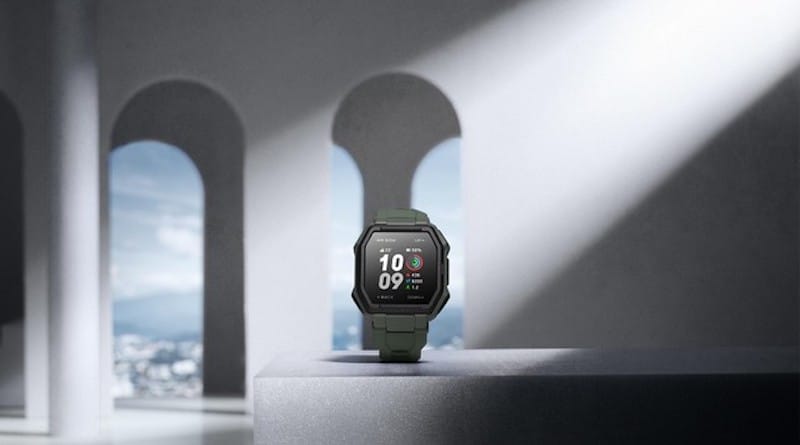 The $70 Amazfit Ares has officially launched in China early this morning. This is Huami’s second outdoor smartwatch, a more rugged take on the T-Rex.

Last year saw a plethora of Amazfit-branded watches, and 2020 looks to be on a similar trajectory. We saw the unveiling of Amazfit Bip S earlier this year and the crowdfunding campaign for Amazfit X has raised more than $1 million.

Amazfit T-Rex is another smartwatch released earlier this year by Huami. It was just recently made available for purchase on Amazon. A statement of its ability to withstand the elements, it can survive temperatures of 70 ℃ and minus 40 ℃. It also has US Military Standard 810g (MIL-STD-810G) certification.

Now Huami has released another rugged device. This one is called Amazfit Ares and although it lacks the Military Certification of T-Rex, it is able to survive most situations. We knew it was coming thanks to a plethora of leaks.

The outdoor sports watch has an octagonal shape and three physical buttons on the right. It apparently is able to withstand practically any blow.

In addition to protection against the elements, Ares has support a multitude of sports. Over 70 to be exact, including some extreme ones such as sky diving, snowboarding, mountain running and more.

The actual dimensions of the main unit are 46.5 x 55.5 x 14mm. Even though its fairly large, the device only weighs 48 grams thanks to its polycarbonate build.

Additional specs include a 1.28 inch Gorilla Glass protected, reflective colour display with 206 x 640 pixel resolution. The screen comes with the ability to get brighter with increasing outdoor light. This way you are able to read the choice of 8 official watchfaces even in bright sunlight. There’s also anti-fingerprint coating.

The watch has 5 ATM rating for water-resistance, there’s a BioTrackerTM PPG sensor inside, 3-axis accelerometer, built-in GPS+GLONASS, barometer for weather/altitude and Bluetooth 4.2 BLE. The bands are made of silicone but unfortunately they are not replaceable. So choose wisely when buying.

The timepiece works with the standard Amazfit smartphone app. In terms of software features, in addition to 70 sports, there’s support for PAI and a few Firstbeat features. This includes Vo2Max, Recovery Time, Training Load and Training Effect.

Battery life is almost two weeks in normal mode and a full three months with limited functions. Switch GPS on and this falls to 23 hours, which is still excellent. The 200mAh battery charges in just two hours.

Amazfit Ares can be picked up in two colours, Rock Black and Army Green. Both are priced 499 yuan which translates into around $70. The device is currently available for pre-sale in Tmall, Youpin and some other retail outlets in the country. There’s an official discount of 40 yuan before the device is officially made available on June 1st. No word yet on an international release date.