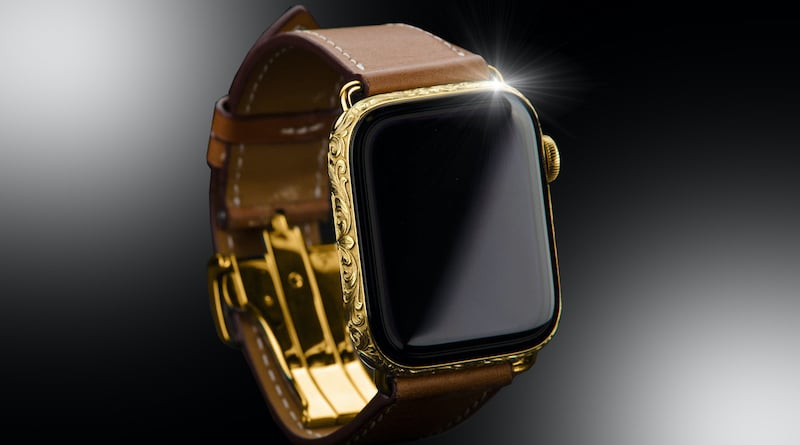 In addition to Series 6, Apple might be preparing to reintroduce a gold edition of its smartwatch as well as a cheaper SE version.

The company had discountinued the $10,000+ iteration with the launch of the Series 4 edition in late 2018. It did not say why – perhaps people were not willing to pay that much for tech that will become outdated in a couple of years time.

It seems, though, that the Cupertino-based outfit is reavaluating this decision. If the photos L0vetodream posted on Twitter are the real deal then the Series 6 watch may be getting a gold Edition model and a five figure price-tag.

The pics show the device comes with a suite of leather straps and a premium looking charging case. The clue that this is a case that can be used for refullling the timepice comes from what appears to be a Lightning port on one of its sides. Apart from the case and luxurious exterior, the Series 6 Gold model should be the same as the regular model.

In addition to a premium, expensive model, there might be a budget version coming our way. To remind, Apple has discountinued everything apart from the Series 3 and 5 model. The other versions can be found at various retailer while stocks last.

But with the upcoming launch of Series 6 it is looking likely the company will discontinue the Series 3, as well. Its price has dropped over the past year to around $200 which currently makes it the budget model, but the tech is a number of years old now. So it needs something in its place.

Tech analyst and leaker Komiya is predicting that Apple is preparing to introduce an Apple Watch SE edition to replace the Series 3 model. It would come with the same old design, 16GB memory, the S6 & W4 chip, Bluetooth 5.0 support and more. To keep the price down there would only be an Aluminium 42mm version. In essence this would be a revamped version of the Series 3 model.

If this turns out to be accurate, you’ll likely be able to buy it next March.

The Series 6 device is expected to launch in early September, so slightly earlier than in the previous years. It is reporedly coming with a faster processor, native sleep tracking, blood oxygen monitoring, improved fall detection and more. That along with the Gold and SE edition should help the Cupertino outfit maintain its lead as the best-seeling smartwatch maker in the world.