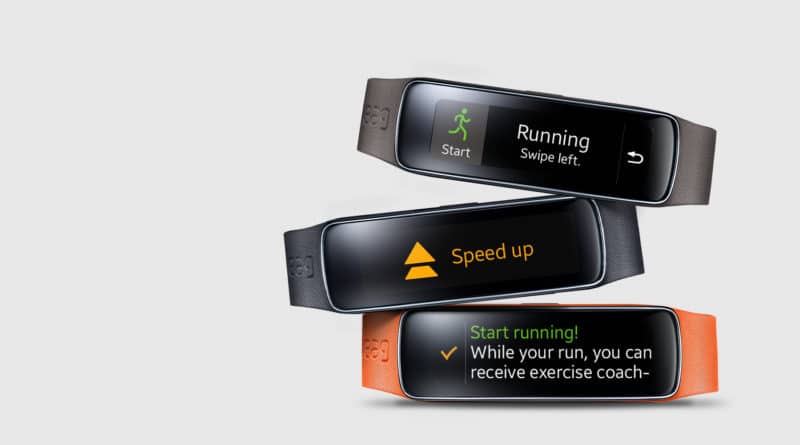 Following a number of leaks, Samsung finally unveiled the New Gear Fit 2 device at an event in New York City last week. Pre-orders of the device went live on Samsung’s website a few days ago, with the official launch scheduled for June 10th. Those keen to get their hands on the new tracker will be happy to know, Amazon and other retailers are now accepting pre-orders.

The South Korean manufacturer’s next generation activity tracker comes with a worthy bump in specs that may bring Samsung a larger bite of the global wearables pie. The fitness device comes equipped with a slew of features, such as a standalone music player and increased memory storage, as well as a comfortable and stylish design.

In terms of sensors, the major bump in specs compared to the original version released two years ago, comes from the inclusion of a built-in GPS and barometer. The GPS will allow you to track walking, running, cycling and other activities, with mapped routes showing directly on the tracker’s screen. The barometre counts floors. The device also come equipped with a heart rate sensor, gyroscope and accelerometer. The heart rate sensor takes a reading every 10 minutes, and more often during exercise.

There is also an upgraded design. The new tracker sports a slightly smaller 1.5 inch super AMOLED curved display, created with maximum visibility in mind. All of the data is shown in full portrait view on the high resolution colour touchscreen, which means you are not tied to your smartphone to check on your progress. The tracker itself now comes in two sizes: small (size of wrist 125-170mm) and large (155-210mm). The textured band has also received an overhaul – it is now more flexible, larger and looks sportier.

With a new Auto Activity Tracking feature, users won’t need to manually activate the sports band to begin tracking workouts. Rather conveniently, the device automatically detects 15 different activities such as exercise bike, step machine, treadmill, pilates, yoga, lunges, crunches and squats. You can take it for a run in the rain, too, with its IP68 rating (the premium standard of protection against water and dust), but dont plan in going swimming with it.

If you don’t feel like carrying around multiple devices or getting tangled up in cords, the Gear Fit 2 features a standalone music player thanks to its built-in 4GB storage. If you do have your phone nearby, you’ll receive notifications for calls, texts, email, apps and calendar.

Samsung’s new device sits somewhere between a fitness tracker and smartwatch. This means the South Korean manufacturer will be going head-to-head with the likes of Fitbit Blaze and Microsoft Band 2. If the promotional video and early reviews are anything to go by, the new tracker looks to show them a thing or two about design and performance.

You can pick up the tracker in three colours (Black, Blue and Pink) and you’ll be able to choose from a variety of watch faces. Look for the new device on June 10th.