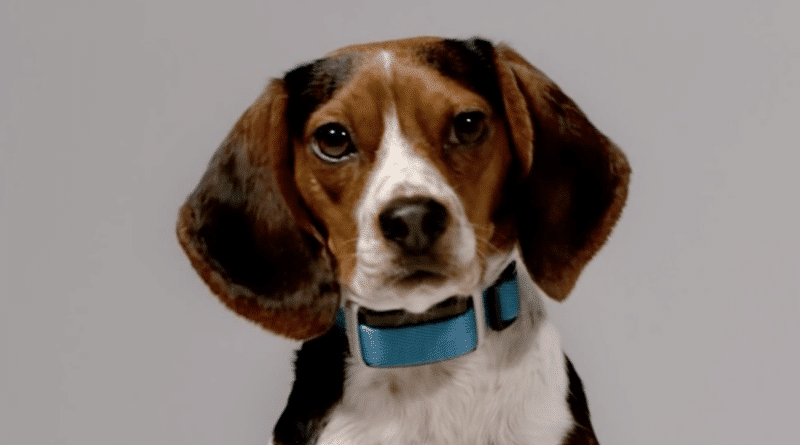 Delta Smart, as its called, is a small durable module that comes with three attachment bands to fit almost any dog collar. The device allows you to train your pooch by monitoring its activity and giving training corrections over the smartphone app.

Delta Smart essentially functions as a “virtual leash”. Simply press a key on your phone’s display, and your pet will receive a vibration, tone alert or corrective stimulation from the electronic collar. The signal distracts your dog providing a deterrent to unwanted or annoying behaviours. This actually means that it can function as what’s more commonly known as a shock collar, and it can work remotely.

Garmin’s video gives a brief overview of the device and promotes the special collar as a way to keep dogs out of trouble.

After a few days the video had nearly 3,000 comments, many of them very negative. Interestingly, if you watch the video on YouTube now, you wont see any of these comments. All you get is the message “comments are disabled for this video”.

Last week, on online petition was launched by a Virginia woman, Tracy Krulik. As of today, it has 5,600 signatures. The petition calls on Garmin to remove the product’s “electric shock feature.” and instead use the product as a GPS enabled collar only.

“GPS is a wonderful tool to use with our dogs, and so we love that Garmin has created a system for the pups. But the shock component is too cruel and too dangerous.” reads the petition.

Yesterday, the International Association of Animal Behavior Consultants released a position statement warning against the Garmin Delta Smart and other smartphone-controlled training devices.

“We believe this device has the potential to cause harm to dogs and should not be recommended by behavior consultants, trainers, or used by members of the public. This is because both Bluetooth and smartphones have the potential to introduce excessive latency. Latency is the delay between inputting something into a system, and the system’s output.”

There are also supporters of Garmin’s new device, who say that they’re humane and effective when used correctly. The Delta Smart isn’t the first dog behavior device released by the company – it also makes products called Bark Limiters. But this is the first time its product has kicked up such a storm.

“It did come as a bit of a surprise, because we’ve been selling these products for quite some time,” said Ted Gartner, a Garmin spokesman.

“These sorts of tools have really, really been able to save the relationship between a dog and a family. That’s what we’re all about.”

The learn more about the complete offerings of the Garmin device, go to garmin.com.