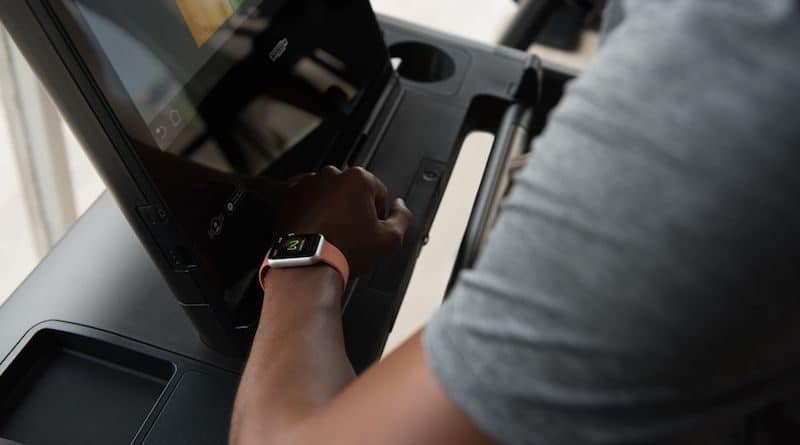 Less than a week before the expected launch of its third generation smartwatch, Apple has offered journalists a peak into its super-secret gym. This is the lab where researchers sweat it out to make sure Apple’s technology is as accurate as it could be and that its algorithms are up to scratch.

The Cupertino company has been operating the facility for several years. Its a regular looking building, located on a side-street just a few miles from Apple’s headquarters. Its not often the company invites outsiders to this space, but Men’s Health received a special invite to see the inner workings of this hush-hush exercise lab.

Behind the closed doors there is busy array of nurses, physiologists, and people wearing $40,000 masks that analyzed calorie burn, oxygen consumption and VO2Max. Men’s Health also found around 40 employees working out on everything from treadmills to cable machines.

Apple is using this full-on fitness studio with group exercise rooms and a pool to generate data on movement and physiology. There are even spaces designed to feel like the Arctic (subfreezing) or the Saharan desert (100°F-plus), which are used for analysis in extreme environments. While most of the work is focused on improving the software and algorithms for the Apple Watch, there are reports the company is looking to develop other products and services in the healthcare space.

Apple claims to have collected more data than any human performance study has to date.

“Our lab has collected more data on activity and exercise than any other human performance study in history,” Jay Blahnik, Apple’s director of fitness for health technologies told Men’s Health.

The work seems to be paying off. Apple does not disclose its smartwatch sales figures, but its clear the wearable has done well for the company. And there’s lots to look forward to.

The watchOS 4 upgrade is coming this fall with a host of great upgrades. The Workout app will come with better coaching, monthly challenges, fancier visuals and a new mode for High Intensity Interval Training. And lets not forget the enhanced swim tracking. Apple’s smartwatch will also play nice with a variety of connected devices via Bluetooth and gym equipment via NFC.

Essential reading: How good is the Apple watch as a fitness tracker

In addition to new health sensors, it is rumored the next version of Apple Watch will come with a cellular connection, a front facing FaceTime camera, smartbands and hopefully a boost to battery life. We can also expect Apple Watch Series 3 to come with a faster processor and more RAM.

We take the timing of this story as another strong sign we’ll see new Apple Watch hardware at the September 12th event.