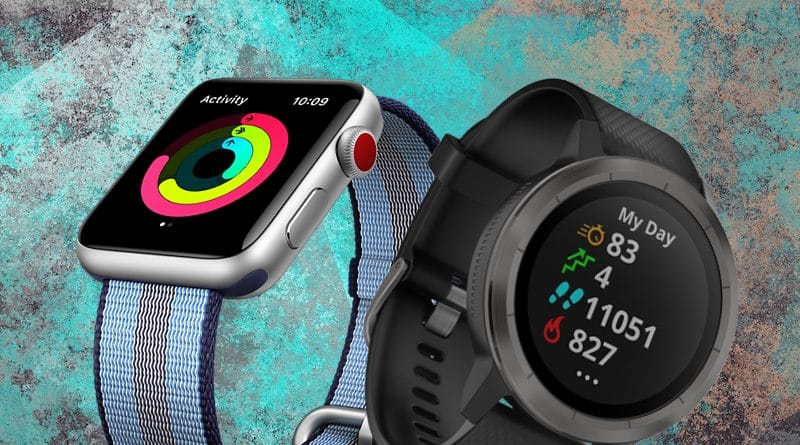 As we head into the final months of the year, it is clear which devices will be fighting for your wrist place during the forthcoming holiday period. And there is going to be quite a bit of competition.

Apple has recently come out with its third generation smartwatch. The big news here is the fact that you are able to make phone calls from your wrist, no smartphone needed. The device has also received a boost in terms of its fitness tracking features.

Garmin on the other hand has launched a slew of new devices. One of these is the Vivoactive 3, a Swiss knife of activity tracking. Much more stylish and a bit smarter than its predecessor, it is likely to compete with the Apple Watch for a similar subset of people.

But there are importances nuances to each that are worth pointing out. Let’s put the two devices side by side.

Launched last month, Vivoactive 3 is an updated version of Vivoactive HR, in terms of value for money probably one of the most feature packed fitness trackers out there. Garmin has now taken all these features, slapped on a few more, upgraded the sensors and processor and packed it all into an attractive round design.

Lookswise, Vivoactive 3 is now more in line with Garmin’s Fenix and Forerunner range. Measuring 43.4 x 43.4 x 11.7 cm and coming in at only 43 grams, this is a sports watch that will appeal to both men and women. Navigation is a combination of using the single physical button on the right and swiping on the touch display. There is also a swipe strip on one side which allows you to scroll up or down. This novel feature may be handy, for example, if you are running.

The 30.4mm (diameter), sunlight visible, transflective, memory-in-pixel (MIP) screen is very vibrant and easy to read both indoors and out. Its Corning Gorilla Glass 3 display comes with a 240 x 240 pixel resolution. The backlight ensures the display is viewable under low light conditions.

The Apple Watch 3 comes across very much like the Apple Watch 2 (and 1…). Apart from the red dot on the crown, there is very little difference. The case is the same size, the only difference being that the back crystal is slightly extended. At 11.65mm, its thickness is almost the same as the Vivoactive 3. Its slightly heavier of the two though, weighting 53 grams (depending on the model).

The device comes in two sizes, the 42mm and 38mm. There is a wide variety of styles and colours to choose from, with casing including aluminium, stainless steel and a new ceramic edition which is four times harder than stainless steel.

Its OLED Retina display with Force Touch is hands down one of the best ones out there. The graphics are sharp and its visible in most conditions. The smaller watch has a 272 x 340 pixel resolution screen, while the larger comes in at 312 x 390.

Unless you prefer the round look, most people would probably agree that Apple beats Garmin when it comes to aesthetics. Apple’s display quality is much better and it has a more polished feel and sleek and stylish interface. The one thing Garmin has over Apple when it comes to the screen is that its always-on.

In terms of sensors, there is very little to separate the two. Under the hood they share an accelerometer, optical heart rate sensor and barometric altimeter. Both devices come with upgrades to the heart rate monitor and Apple has for the first time included a barometric altimeter for measuring altitude and floors climbed. Apple’s watch also has a gyroscope for sensing angular velocity while Garmin’s device comes with a compass for navigation and thermometer for measuring outside temperature.

In terms of processing power, Apple’s third generation device comes with a 70% faster dual-core processor and improved Bluetooth and Wifi connectivity. Garmin does not disclose information on its processors. Without specific details we can’t make an actual comparison, but its probably safe to assume that Apple Watch Series 3 has more processing power.

Battery life is important. Ideally, you don’t want to be charging your device every night. Unfortunately Apple has not managed to do anything on this count. Just like its predecessors, the Series 3 watch will keep going for around 18 hours and even less when GPS is activated. Perhaps this was to be expected taking into account the bump in specs.

Garmin says Vivoactive 3 can keep going for up to a week on a single charge and 13 hours with GPS switched on. This is slightly optimistic though and actual use shows you can expect to squeeze around 4-5 days of use. This is still decent battery life and gives Apple something to aim for.

With their fantastic 5 ATM (50 meter) water resistance rating, both trackers can deal with all weather elements. They are perfectly capable of tracking your swim sessions, too.

While Vivoactive 3 lags in fancy display features, it makes up ground when it comes to activity tracking. Mind you, both of these devices will provide you with essentials. This includes fairly accurate info on steps, calories, distance and floors. The trackers also spit out motivational messages and nudge you with move reminders if you are having a particularly lazy day.

In the morning Garmins’s app will provide you with detailed info on light, deep and REM sleep stages which you won’t get on the Apple Watch. With 18 hours of battery life, sleep tracking would be kind of pointless on Apple’s device. There are work-arounds. You can always install a third-party app to do the job, as long as you charge the watch before you go to bed.

Both devices are perfectly capable of phone-free exercising. For outdoor fitness tracking, the built-in GPS will keep tabs on your pace, distance, elevation and split times. In the water they will track your swim sessions too, with lap count, duration and calorie burn.

With WatchOS4, Apple has boosted its heart rate features. You are now be able to see your current heart rate just by raising your wrist, there is the addition of a recovering heart rate, and the watch will alert you when it detects an abnormal spike in your readings. You won’t find chest-strap quality heart rate data on either of the two devices, but they are not bad when it comes to wrist-based competition.

The Apple Watch also now comes with a barometric altimeter sensor so you get info on floors climbed and altitude. A great feature which the company will no doubt take advantage of when it comes to tracking skiing workouts.

Garmin’s device goes a step further for a more cohesive fitness and sport experience. This includes your Cardio Fitness Level (VO2Max) assessment which essentially lets you know how fit you are. There is also the new rep counting feature and pre-loaded gym workouts.

And lets not forget the all day stress tracking. The Vivoactive 3 will notice when your heart rate increases when you aren’t moving. If you find life is stressing you out, there are breathing exercises to help keep you calm, a feature you will also find on the Apple Watch. Also, out of the box Garmin supports things like cycling sensors and footpods, whereas Apple doesn’t.

On to non-fitness features front Garmin is light years behind Apple. You will get info on notifications (calls, texts, calendar events push notifications from your favorite apps), an app store and music control. But that’s where it ends. We still need to wait a bit longer for Garmin to include offline storage for music, a feature which has become commonplace on many other units now.

Oh, and there is Garmin Pay. The Vivoactive 3 has a built-in NFC chip which stores credit card information so you can leave your wallet behind. The functionality is enabled by FitPay and supports Visa and Mastercard debit and credit cards from major issuing banks.

The Apple Watch, on the other hand, shines on this measure. With its huge range of smartwatch features, it becomes a natural extension of your iPhone. There is a plethora of native and third-party apps and the upgrade to watchOS4 features Siri, Apple Music streaming, and much more.

And lets not forget cellular connectivity. The watch uses the same number as your smartphone. Although users still need a SIM, the Series 3 features a small electronic SIM card. When you are away from your phone, the watch automatically switches to the cellular signal. Third party apps will be able to tap into this signal as well.

While on paper the two smartwatches might seem similar, they are actually quite different. Garmin’s device provides a cohesive fitness tracking experience, while the Apple Watch is a best of both worlds solution.

The biggest stumbling block to Apple’s device becoming a true 24/7 fitness tracker is its battery life. Hence the lack of sleep tracking, for example. Nevertheless, Apple is closing the gap each year on the likes of Garmin and Fitbit. The third generation device sees the inclusion of barometric altimeter for counting floors and a boost to the heart rate features.

Garmin’s wearables have come a long way over the past year when it comes to design and functionality. Vivoactive 3 is a sleek, lightweight device which will appeal to both men and women equally. It packs the essentials when it comes to fitness tracking, even if it does lack some more advanced performance metrics you can find on Garmin’s pricier high-end sports watches.

In terms of non-fitness features, however, Vivoactive 3 pales next to the LTE-equipped Apple Watch Series 3. But keep in mind, Apple’s cellular-enabled watch is a bit pricier.

2 thoughts on “Apple Watch 3 or Garmin Vivoactive 3: which to get?”