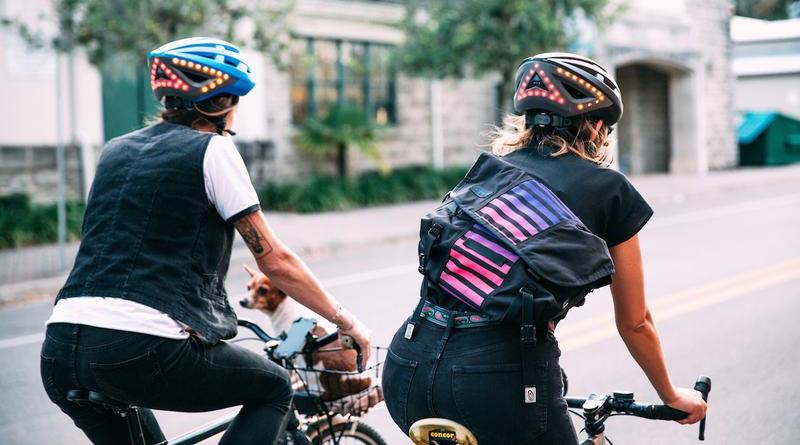 The highly rated Lumos smart bicycle helmet is now smarter than ever. With the help of the Apple Watch, its been updated to allow for gesture controls. The company also confirmed its helmet will be the first such gizmo to be sold in Apple stores.

The Lumos Helmet, which got its start as a Kickstarter project some three years ago, goes out of its way to make sure you’re seen when cycling. It does this by integrating lights, hard brake, turn signals and a protective helmet into a single cohesive package.

The company has today launched its new watchOS app. This lets you control your helmet’s lighting using simple gestures. You do the hand gestures, Apple Watch does the thinking, and Lumos does the blinking. With 10 white lights in the front, 38 red in the rear, and 11 orange on each side, oncoming vehicles and pedestrians will see you coming no matter where they are.

Previously, the helmet’s built-in turn signals were only controlled via a handlebar remote. This works by pushing the button before a turn so everyone knows where you’re going. The remote also has a built-in accelerometer that can tell when you’re slowing down. This in turn activates all 38 solid LEDs in the back to warn anyone behind you.

The helmet battery lasts about six hours in flashing mode and three in solid mode. Charging via the included magnetic charging cable takes just two hours. The updated app also syncs your riding activity to Strava and Apple Health through a Bluetooth connection.

“I am tremendously excited about this new feature and how it will further enhance cycling safety,” said Eu-wen Ding, Lumos Helmet CEO.

“As a design-centered company, we’re thrilled to be able to launch this with Apple.”

The Lumos helmet can be picked up on Amazon, the manufacturers website and the online Apple store. From this spring it will also be available in 300 Apple stores throughout the US and Europe.