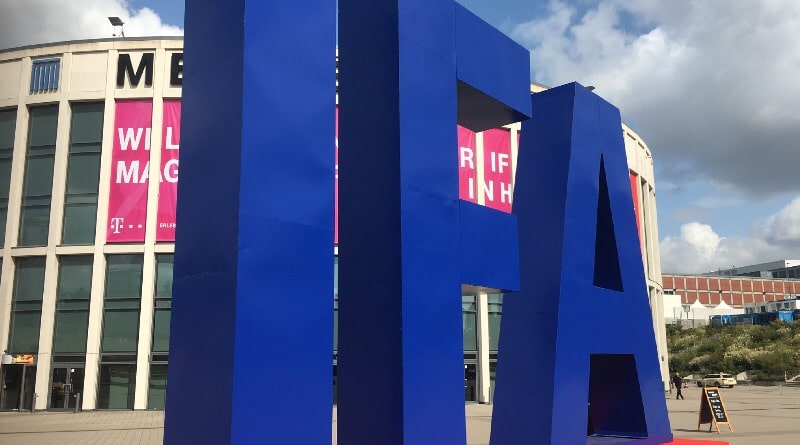 Europe’s biggest technology show, known as IFA, is held annually in Berlin. The event is a chance for companies to showcase their existing and upcoming products. Over 250,000 visitors attend each year. The 57th IFA started a couple of days ago and runs until next Wednesday, September 5th.

Wearables have made a decent showing in recent years. A number of big and small brands have used the gathering to announce and showcase upcoming fitness trackers and smartwatches. This year was no different.

One of the most recognized names is the world of wearable tech debuted a new addition to its Charge range of fitness trackers. As the leaks predicted, Charge 3 is pretty much a smartwatch disguised as a fitness tracker. It comes with a full-touch screen, water-proofing, 7 days battery life, smart features, an added sensor and more.

The device was proudly displayed at Fitbit’s stand. Holiding it in your hand, it feels strangely familiar. That’s because its not a distant cousin of Charge 2, its a better looking sibling – clearly recognizable, but a shinier and more premium version.

Swipe up on the touchscreen to cycle through daily fitness stats, swipe down to see notifications, swipe right to open up the exercise, relax, timers, alarms and settings screen. Everything feels very responsive and slick. If you’ve ever used a Fitbit device, you’ll feel right at home.

Samsung has unveiled the stylish Galaxy Watch, an updated version of its ageing Gear line. It comes with LTE connectivity, comprehensive fitness smarts, GPS, water resistance and a price-tag to match. Few real surprises, though. Nevertheless, the device has an extremely premium feel and looks really, REALLY, great.

This is primarly a fitness focused smartwatch. Its slew of activity tracking sensors consist of an accelerometer, heart rate, gyro and barometre. These work to spit out stats on steps, distance, floors, calories, stress and sleep. The activity tracking also includes keeping tabs on up to 40 different exercises – and swimming thanks to 5 ATM water-resistance.

There were one or two surprises, too. One of these was Garmin’s Vivosmart 4. Packed into an extremely narrow body, the next iteration in the Vivosmart series brings all the usual fitness tracking smarts, in addition to a couple of novel features.

First off, the fitness tracker gauges your oxygen saturation levels at night. This will allow you to better understand your sleep quality and potentially use to identify sleep conditions such as apnea. You can take readings on demand during the day as well.

The other novel feature is what Garmin calls Body Battery energy monitoring. This uses a combination of stress, heart rate variability (HRV), sleep and activity data to let you know when to push hard, when to rest.

Casio’s PRO TREK Smart series consists of rugged watches designed for outdoor enthusiasts. The WSD-F10 was released back in 2016 and this was followed up last year with the WSD-F20.

This year at IFA, Casio has announced the WSD-F30. The new timepiece boasts an enhanced design along with a number of new features such as the use of offline maps and GPS log recording for up to three consecutive days on a single charge. Great news for folks that love to go trecking outdoors.

The biggest design tweak is the water-resistant casing. You’ll be able to use Falster 2 come rain or shine and it will track your swim sessions, too. There are the usual steps, distance, sleep and activity stats, in addition to heart rate this time around.

GPS has been slapped on as well, something those serious about exercising outdoors will appreciate. And lets not forget NFC for those payments on the go.

The other Fossil Group brand to debute a new device at IFA was Diesel. Its Diesel On Full Guard 2.5 device takes all the Fossil Gen 4 features (GPS, NFC, water resistance, etc) and packs it into a body that is scarily big.

And we’re not kidding. The device looks absolutely enormous. You will need some seriously big wrists to strap one of these babies on. Diesel On Full Guard 2.5 has a 56mm stainless steel case and a 1.39 inch screen. If you were wondering whether there is a bigger smartwatch around – no, there isn’t. A watch for real men who like to make a bold statement.

At the other end of the spectrum, Bellabeat is back at IFA this year with a new leaf-shaped tracker for women. The appropriately named Leaf Chakra is a pendant that can be worn on a necklase or as a clip-on accessory.

The device looks very much like its predecessors and is made from wood composite and stainless steel, but there are some design differences. The biggest is that Leaf Chakra is enhanced with healing crystals.

Outside of that, the gizmo tracks your activity, sleep and menstrual cycle, and combines this into a single metric which lets you know how stressed you are. You can then choose from about 20 different guided mediations and breathing exercises designed to help you chill.

A crowdfunded project, the stylish FES Watch U allows you to change designs at the touch of a button. More of a fashion accessory than a smartwatch, the device sports an e-ink display on both the face and strap so you can seamlessly blend it into your wardrobe.

The device has been selling in Japan for about a year now. Sony has said it will make its way to Europe in mid-September. The European version will come with over 100 pre-loaded designs, and if that’s not enough you can make your own.