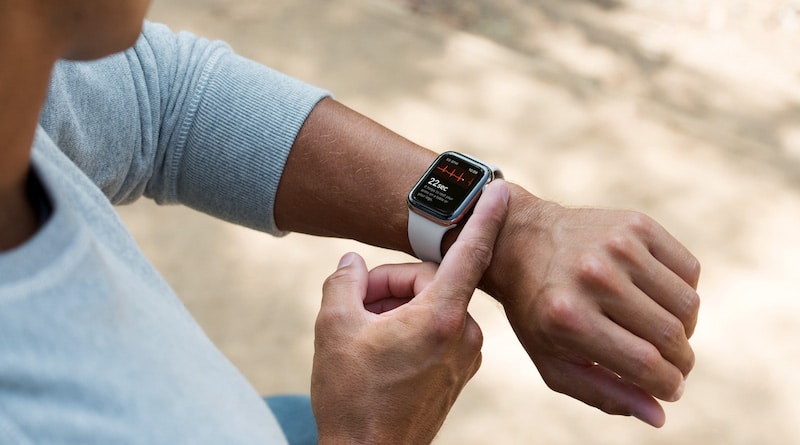 Tim Cook kicked off the proceedings by announcing that his company has shipped some 2 billion iOS devices so far. Its clear the company has done much to change many people’s lives and help usher us into the 21st century.

Quickly moving on to the Apple Watch, Cook mentioned the device is not just the best selling smartwatch in the world, it is the number one watch in the world. And the new version comes with plenty to look forward to. So lets dive straight in!

As expected, the Series 4 will sport an edge-to-edge screen with new display technology called LTPO that improves power efficiency. Apple says the screen real estate is larger by 30% on both the 40mm and 44mm version. The actual dimensions of the device are still the same although at 11.4mm, the new device is slightly thinner than its predecessor.

The larger screen means the device will be able to show more complications (up to 8) and apps will be able to show more information and detail. As before, the complications are customizable and you can for example design a watch face with your loved ones – tapping on their picture dials their phone number. Or how about a health and fitness face or one for traveling with info on time zones?

The Breathe app can now also be set as a watch face. You can choose from three different iterations. Apple says its also introduced new dynamic watch faces including Vapor, Liquid Metal, Fire and Water.

Much has been done to improve the hardware.

The digital crown has been completely reengineered. It now includes haptic feedback, giving you a more responsive mechanical feel through the sensation of incremental clicks.

The speaker is 50% louder and has also been completely revamped. Some have speculated Apple has added a second microphone, but the company has actually moved the microphone to the opposite side to reduce echo and make phone calls clearer.

The back is made of black ceramic and sapphire crystal on all versions of the device. Apple says radio waves can now pass through both the front and back resulting in better cellular reception. Up to now, the GPS-only version of the Series 3 model was the only device with a ceramic back. All other models sport had a metal back.

In addition to improvements that will arrive as part of the Watch OS5 update, Series 4 comes with a few upgrades which you won’t find an older devices.

This includes Apple’s next generation accelerometer and gyroscope which can sample motion data 8 times faster. The improved hardware allows the device to do a better job at tracking steps, calories and more. It also allows the gizmo to do some more interesting things.

One of these is that the device on your wrist will be able to identify a fall. This is actually more difficult than it sounds and requires a tremendous amount of data and clever algorithm work.

There is more than one way to trip or fall and Series 4 can identify a number of them based on your wrist trajectory and impact acceleration. Once it detects you’ve had an accident, the watch will open up an alert screen which allows you to initiate an emergency call. If you are immobile for 1 minute the device will automatically dial emergency and notify your loved ones with your location.

Moving on to the heart rate sensor. And this is where it gets even more exciting.

The previous generation introduced a number of heart rate sensing functions such as high heart rate alerts which notify if the device suspects there is something wrong with your ticker. This has been expanded now and Series 4 can send notifications of low heart rates. Although low heart rates are generally considered good, if they go too low it can be an indication something is amiss.

The new watch also intermittently analyzes heart rhythms and sends alerts for atrial fibrillation. Apple says the device is not perfect at this, but that it will be helpful to people not aware they have an issue. This is all powered by existing the heart rate sensor.

The most exciting of all is the new ECG sensor. Apple has integrated a crystal electrode on the back of the device and it connects to the digital crown electrode.

To take a reading rest your finger against the digital crown. This creates a closed circuit with the sensor on the back. Built in electrodes will than work to detect electrical impulses from the heart.

All it takes is 30 seconds to take a measurement. You’ll get a full report in the new ECG app that will let you know if your heart rhythm is normal or there are issues. Everything is stored in the app, along with a pdf so you can forward the info on to your doctor.

Apple has actually received clearance from the FDA for these measurements, the first of its kind. No doubt its taken advantage of its fast-track approval process. Irregular heart rhythm alerts have also received FDA clearance.

Now to the bad news. There is still no sleep tracking and this is because battery life has not improved. For the most part its unchanged from the previous generation which is not really surprising considering the boost in specs. Runners will be happy to know, the device will be able to track outdoor workouts for up to six hours on a single charge, which is an improvement over the previous generation.

Series 4 will be available in aluminum finishes anodized in silver, gold and space gray. You can also pick up the device in gold stainless steel with a matching Milanese band, and silver and space black stainless steel models. All existing bands will work on the Series 4.

The watch starts at $399 at Apple.com for the GPS-only version which shoots up to $499 for the cellular edition. Series 3 now starts at $279.