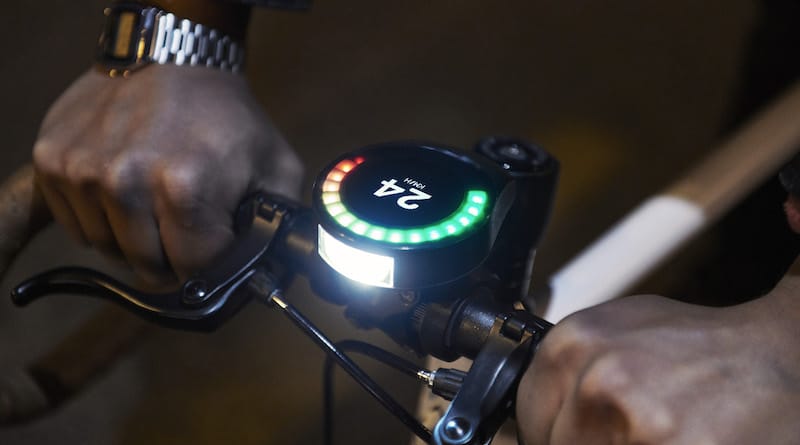 Montreal-based SmartHalo have announced the next iteration of their popular GPS bike navigator and tracker.

Back in 2015, the outfit raised over CA$ 500,000 on Kickstarter to develop the original device. Since then, over 10,000 backers have received the product and SmartHalo has become available for purchase to all (view on Amazon).

The gizmo is designed for urban cyclists, essentially a Swiss Knife of biking accessories. Just like before, SmartHalo 2 sits on the handlebars of your bike but it’s lighter, sleeker and packed with new functionality.

The five main features remain the same and include a navigation system, a powerful light, an anti-theft alarm, fitness tracking and personal assistant. The company says all of this has been upgraded.

Central to the tech is an intuitive halo of light that taps into a GPS signal to guide cyclists to their destination via an LED light. When it’s time to make a turn turn, the signal beams in circular white and green colors. If you are traveling in the wrong direction you’ll get a red flashing prompt.

The second iteration includes some 30 upgrades over the original. The 1.5” OLED screen is more discreet now, there’s custom-built navigation for cyclists, customization of metrics to suit any cycling style, GPX and waypoints integration, a universal mount compatible with quarter lock mounts and more.

“Every cyclist out there is different,” said CEO and co-founder Xavier Peich.

“They all have their own story. We built SmartHalo 2 so they could each make it their own.”

The company has, once again, turned to Kickstarter to make their product a reality. The campaign has gone live yesterday and the team has smashed through their funding goal in less than an hour!