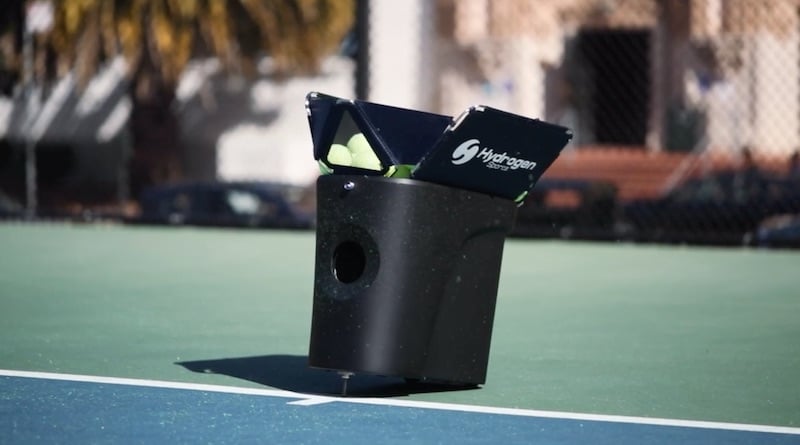 Some three years in the making, Proton is about half the size of a standard tennis ball machine (15” x 17” x 9”). You could probably equate its size to a small carry-on suitcase. The thing is also very lightweight, coming in at just 8 kilograms, and that’s with the battery.

Proton can fling balls in your direction at speeds of up to 70 mph and maximum spin of 3000 rpm which is right up there with fully sized machines. The ball capacity is 100 tennis balls.

Apart from the small size, the most novel aspect of Proton are its smart controls. You can use the accompanying smartphone app to specify the spin, speed, location and timing of shots. Or tap where you want the ball to go and let the app’s proprietary algorithms do the rest.

There are also multiple built-in practice routines. This includes everything from footwork to stroke development and game situations.

“After leaving Apple four years ago, I bought a ball machine to work on my game and was disappointed in how primitive and heavy the machines were,” said Jonah Harley, founder and CEO of Hydrogen Sports.

“Technology has advanced so much since these machines were designed in the 1980s, especially in motors, batteries and our access to smartphones. Leveraging state of the art technology, we were able to design a machine from the ground up that dramatically improves the experience and portability of the tennis ball machine.”

The machine has a few similarities with Slinger, a $519 portable tennis ball launcher that takes the shape of a tennis bag. The gizmo raised over $1.6 million on Kickstarter and Indiegogo last year. After a number of delays which frustrated its backers, the hope is it will start shipping by the end of this year.

Proton and Slinger weight about the same and are similarly sized so are both portable. But Slinger can only achieve speeds of up to 45mph and lacks the sophisticated smartphone app controls. It is much cheaper, though, and looks better.

Proton is available now for pre-order on hydrogensports.com. It can be picked up for $1,195 which will go up to $1,595 after it becomes available in the summer of 2020. This might seem like a lot (and it is), but it’s actually less than half the price of fully sized ball machines.