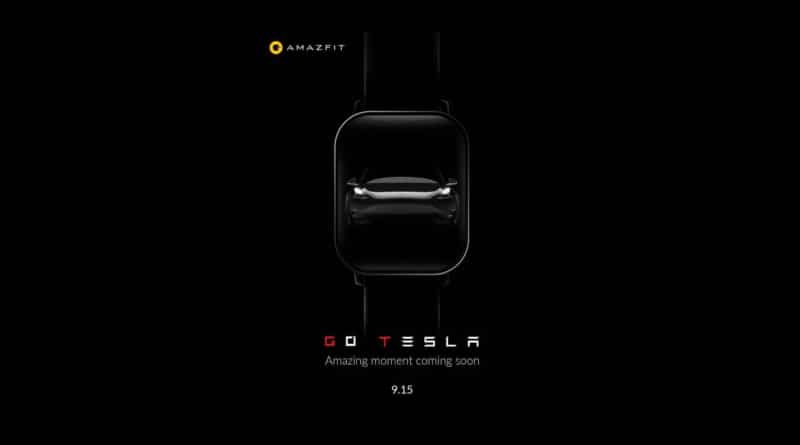 Huami has hinted in the past few days it has teamed up with Tesla on a new product. The result of their collaboration was expected to be announced today. So far nothing has been revealed.

A teaser (image above) was published online by Huami Technology founder and CEO Huang Wang who shared the news via his Weibo account. He is also an avid car enthusiast. Wang revealed the product will be released on September 15th but did not offer any further details.

However, following this announcement Elon Musk took to Twitter to deny his company is involved with a smartwatch project. He added that the future is in human-brain interfaces rather than smartwatches.

“Definitely not. Smartwatches & phones are yesterday’s technology, Neuralinks are the future”, Musk said in a tweet late yesterday.

So it looks like the duo is not working on a smartwatch. Therefore, the announcement may be to do with adding support for cars from Tesla to Amazfit GTR and GTS watches.

Huami has done something similar last year. In June 2019, it connected its brand with Xiaopeng Motors and their battery-powered mid-sized Sedan. This allows owners of Xiaopeng P7 electric cars to lock/unlock the doors as well as start the engine remotely via NFC on Amazfit watches. The Tesla Amazfit collaboration might do the same.

The picture on the teaser poster reveals a square timepiece, that looks very much like the Amazfit GTS. This is an Apple Watch lookalike that comes with awesome battery life. We know the watch is in for an upgrade alongside its square-shaped brother, the GTR. Their successors are expected on September 22nd.

This is not the first mention of a Tesla-made smartwatch. A rather odd collaboration was revealed in an FCC filing in early August. This one is between the Norwegian kids smartwatch maker XpLora Technologies and Tesla Motors.

We will, of course, update this article as an when we hear more. There’s still some time left today so we may, indeed, get an announcement on the 15th.