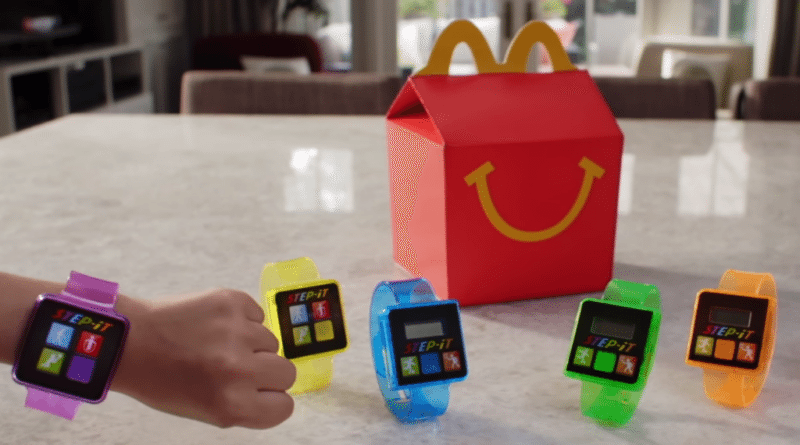 McDonalds foray into fitness tracking has ended quickly and badly. The fast food giant was hoping its Step-It fitness tracker would be a means of getting kids active, but has now voluntarily removed the device from its restaurants in the US and Canada due to potential skin irritations.

“We are voluntarily removing the Step It! Activity Band Happy Meal toys in our restaurants in our United States and Canadian markets. It will no longer be offered as part of our Happy Meals. We have taken this swift and voluntary step after receiving limited reports of potential skin irritations that may be associated from wearing the band,” McDonald’s said in a statement on Wednesday.

“Nothing is more important to us than the safety of our customers and we are fully investigating this issue. Our restaurants are now offering our youngest guests an alternative Happy Meal toy.”

No details beyond the statement were released and we don’t know exactly what has caused the problem.

It is worth noting, even the mainstream wearables manufacturers have had similar issues. This includes Fitbit,  Jawbone and Garmin whose users have complained about rashes and burns. And just a few months ago, Polar had released an email to owners of their new A360 tracker confirming that some units can cause an allergic skin reaction. Luckily, there are steps you can take to reduce the chance of experiencing adverse reactions.

The Step-It activity tracker was launched to mixed reviews to coincide with the Olympics in Rio. The range of six activity trackers includes three light-up bands that flash quickly or slowly depending on the child’s pace. They also count the number of steps the child takes.

With fitness trackers all the rage, there has been increased interest in tracking children’s activity. The major benefit of using a fitness tracker is motivation. By setting goals, getting feedback and being rewarded, kids are encouraged to do more.