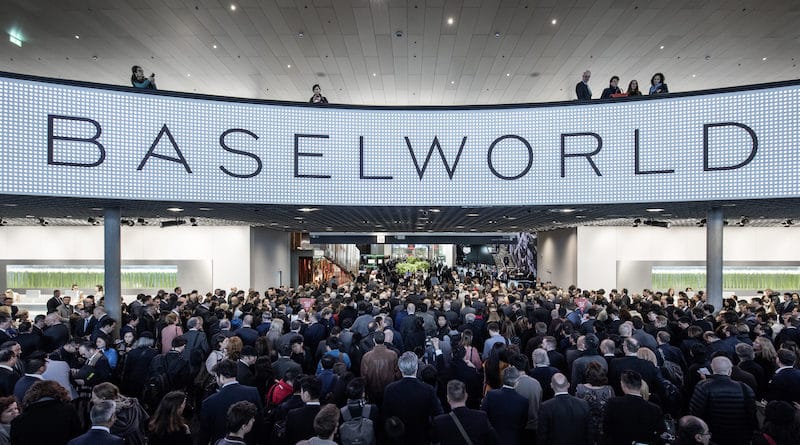 The smartwatch market has been slowly losing momentum but it looks like this may all change very soon.

The new and improved Android Wear 2.0 update came out earlier this year. Google launched two feature packed new watches to coincide with the launch, but everyone was really waiting for Baselworld to see what 2017 had in store.

The event did not disappoint. Baselworld is organised each spring in the city of Basel, Switzerland, and it attracts top watchmakers and jewellery makers from around the world. Opening for the 100th time this year, the week long trade show, which will close on March 30th, is attended by 1,300 exhibitors.

Federal Councillor Alain Berset opened the show, saying: “At Baselworld, beauty, perfection and dedication are celebrated. The watch and jewelry show, Baselworld, also represents a work ethos without which there could be no excellence; an ethos that exemplifies our country, and not just the watch industry.”

Many of the top watch brands are debuting time-pieces that are taking advantage of a host of new features and supports Android Wear 2.0 has to offer. This includes standalone apps that don’t need a smartphone to work, a Play Store for downloading third party apps, personalizing watch faces, and Android Pay.

Though Baselworld continues on into next week, there’s plenty that has already been announced. Here’s a gallery of some of the best smartwatches and hybrids revealed so far.

Pretty much everything on TAG Heuer’s $1,650 Modular 45 can be swapped out and customised. In fact, by combining interchangeable elements you can choose from one of over 4,000 unique configurations! You can even take out the Connected module and slip in a mechanical one when you’re looking to switch it up.

Fossil’s new smartwatches are called the Q Venture and Q Explorist. Venture is the female version of the watch. The time-pieces are described as, “the brand’s slimmest, most feature-packed touchscreen smartwatches to date.” Both are set to launch in the Fall of this year.

Just like the female, the male version of Fossil’s new watch sports will powered by a Qualcomm Snapdragon Wear 2100 processor, with 4 GB of memory, Wi-Fi and Bluetooth connectivity and around a day of battery life. This is part of Fossil Group’s collection of 300 smartwatches due to be launched this year!

Not everyone wants a fully featured smartwatche. Fossil Q Activist is a classic looking timepiece that combines the look and functionality of a traditional watch with abilities that are evident in today’s smartwatches.

This is another piece from the Fossil collection that looks like a watch, but acts like a smartwatch. Fossil’s new hybrid watches now also sport programmable physical buttons on the side that can be used to take selfies with your smartphone or to control music on your phone.

The cool looking Diesel On collection of hybrid smartwatches will include new colorways and a new platform based on the popular Mega Chief. The watch is set to drop in the Fall of this year.

The winner of the worst name award, the Tommy Hilfiger TH24/7You is one of three Movado watches unveiled at Baselworld 2017.

New to the wearables space, Tony Burch is introducing The Collins hybrid smartwatch. The timepiece is set to launch in the 2017 holiday season.

Casio’s latest watch comes with a range of features for the outdoors type. You get a rugged display, offline mapping, loads of sensors, GPS and waterproofing.

Misfit showcased Vapor, the brand’s first touchscreen smartwatch featuring heart rate, GPS and standalone music functionality. The big news here is that Vapor will be running Android Wear 2.0 instead of a proprietary platform.

The Movado Connect is a smart looking Android Wear watch. It combines a clean look that is based on the company’s classic Museum model. Look for it to drop in the Fall with a range of styles starting at $495.

The new collection Guess Connect Touch benefits from a complete redesign of the original Guess Connect smartwatch. This time around, the company has opted for a circular touchscreen face style compared to the original Connect’s hybrid mechanical look.

The new Michael Kors smartwatch line features updated software and a dazzling AMOLED touchscreen display. This is a watch for the customer who wants it all: technological innovation, social connectivity and great style.

The sleek and feminine Sofie features a thin, lightweight case body with a pavé bezel and a full round display. It will be offered in eight different plating-and-bracelet combinations, with seven quick-release interchangeable strap options.

Michael Kors Access will expand its collection of hybrid smartwatches by offering two new colorways for ladies and new colorways and platforms for men. In fact, the company announced that all its men’s watches starting this Fall will have some sort of smart technology built in!

Completing the Movado range, Hugo Boss Touch will be constructed from carbon black IP stainless steel for the body and come with interchangeable strap options. Featurewise the watch will come with NFC but no heart rate monitor.

Another newcomer to the wearables space, DKNY is introducing the DKNY MINUTE hybrid smartwatch collection due out for the 2017 holiday season.

Using groundbreaking technology to mount watch hands through the center of the high-resolution TFT color display, ZeTime blends the classic design of a traditional timepiece with the most advanced features of a smartwatch. The company is raising funds on Kickstarter to develop the watch.

The limited edition Fossil Q x Cory Richards is not to dissimilar from Fossil’s other devices, but it does feature some interesting design tweaks. For those who may not know, Cory Richards is a popular wildlife photographer for National Geographic and a big fan of Fossil watches.

Skagen introduced the Jorn and Hald hybrid smartwatches, offering thinner case sizes that are appealing to a modern aesthetic.

The Michele Connected hybrid smartwatch collection is a new comer to the Fossil Group’s range of connected watches. Look out for it in the 2017 holiday season.

Watch brand GC is using Baselworld 2017 as a platform to announce their first ever smartwatch. The Guess Connect Touch comes in eight different models, with 44mm and 41mm sizes to choose from. There’s also a range of straps including leather, stainless steel and silicone.

Alpina has been a leader with its diving watch collection for more than half a century. A hybrid smartwatch for divers, the Alpine Seastrong Horological Smartwatch comes with 100m water resistance and a comprehensive range of other features.