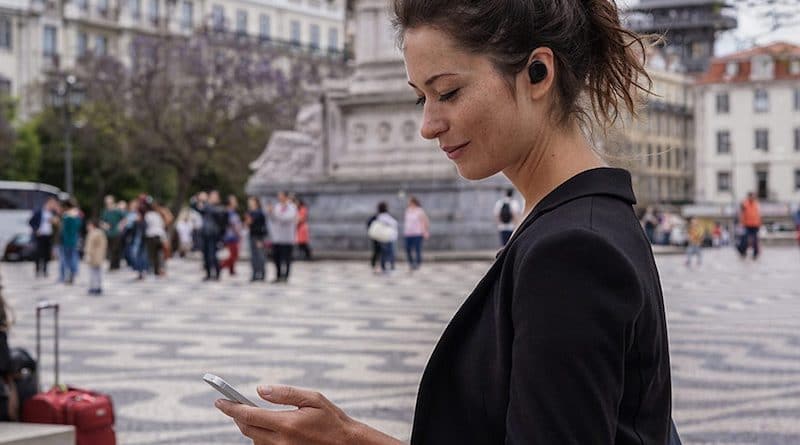 The German company has joined forces with Starkey, one of the biggest names in the hearing aid business, to bring two products to market: the Dash Pro tailored by Starkey and the lower cost standard Dash Pro. The Starkey version will be 3D printed into the actual earpieces by one of 5,000 partner audiologists in the US and Canada, thus the price difference.

Both the high-end version and plain Dash Pro models share many of the same powerful features that has made the original Bragi headphones a successful Kickstarter name.

They allow you to stream music from your Bluetooth device, or load up to 1,000 songs directly onto the 4GB onboard music player. Passive noise cancellation begins as soon as the buds are inserted into your ears. With a swipe you can initiate ‘Audio Transparency’, allowing you to hear the world around you.

More than just an audio accessory, the Dash Pro is also a workout partner thanks to its 27 sensors. The waterproof (IPX7) buds detect whether you are running, cycling or swimming, and automatically switch to track that activity. During your exercise, the on-board activity coach keeps you motivated with realtime feedback. You can choose to receive live info on your heart rate, steps, cadence, strokes, duration, and more.

Powered by a 32-bit processor, the Dash Pro runs on the company’s new Bragi OS 3 (BOS 3). The upgrades make you really feel like you have a computer in your ear. Through integration with iTranslate, the earbuds can even translate between 40 different languages in real-time. Dash Pro buyers get a 30-day subscription to try the feature out for free.

As with the original version, you get a portable charging case which allows you to recharge up to 5 times on the go. The buds will run approximately 5 hours of power per charge.

The standard Dash Pro retails at $329, while the personalized Starkey version will set you back $499. Both can be purchased on bragi.com.