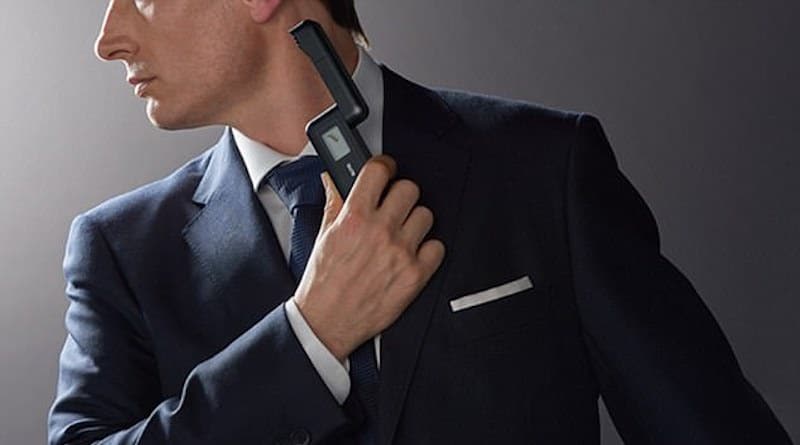 Body odour is the unpleasant smell produced by bacteria on the skin breaking down acids in your sweat. It is largely linked to the apocrine glands. The problem can typically be managed with proper hygiene, but unless you have very honest friends or family, sometimes it can be difficult to know you’re emitting a stink.

The Japanese have a peculiar term for this – “sumeru harasumento” – which can be translated into English as “smell harassment.” This, we are told, is a particular issue in the packed Japanese subway system. We’ve caught a whiff of this problem on the London Underground as well!

Some revert to applying generous amounts of deodorant or cologne. But apply too much and you will not be doing yourself, or for that matter others around you, any favours.

To help keep offensive odor at bay, a Japanese outfit called Tanita has come out with a stench scale. The gizmo can literally tell you whether or not you stink.

To use simply flip out the sensor and point to armpits and other areas of your body that may be emitting too much smell. Tanita ES-100 measures particulate matter in seconds and put a number from 0 to 10 on the intensity of your odour. The higher the number, the larger likelihood you would benefit from a shower. The scale will even warn you if you’ve gone too heavy on deodorant.

The replaceable sensors inside the device are similar to those that can be found in the company’s alcohol-detecting breathalyzers. Tanita has adopted them to detect the chemical compounds that exude sweat glands. They can be used about 2,000 times, which roughly equates to about a year of usage.

Tanita’s ES-100 goes on sale in Japan today, just in time for the Summer heat and longer days. The company is targeting men in their 40s and 50s as that’s when it says men start worrying about how much they stink.

Unfortunately for us, Tanita has not stated any plans to release the device outside of the country. For those in the East, the electronic nose will set you back 13,824 yen ($125).