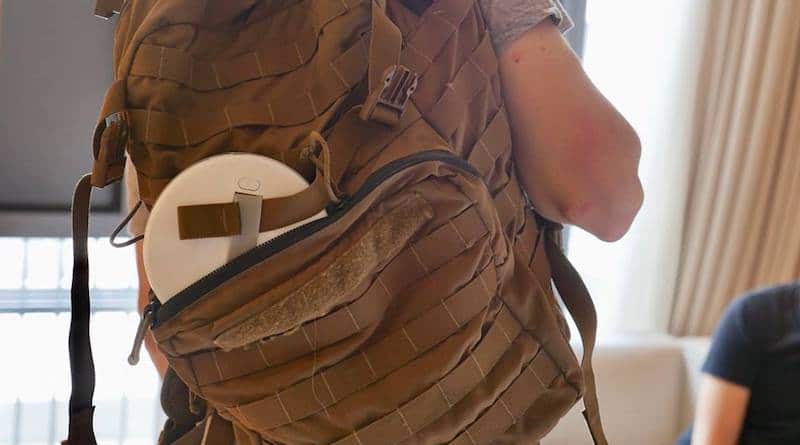 There is no shortage reports on the scary amount of bacteria that can be found in typical hotel rooms. It might be a good idea to think twice before reaching for that TV remote, bedside lamp, light switch, bathroom faucet and countertop as its claimed such spaces are filled with populations of microscopic creepy crawlers. Many of these are not dangerous, but some are.

And don’t assume that paying more means you’ll automatically get a cleaner room. A number of studies have shown that four and five star luxurious rooms can actually be dirtier than three star rooms. Practically speaking, keeping some lysol cleaning wipes handy should do the trick. But there might be a better solution.

Cleansebot is the first bacteria killing travel robot. The pocket-sized device has 18 sensors built in and four UV-C lamps to sanitize, disinfect and prevent the spread of airborne viruses. It is claimed Cleansebot can get rid of 99.99% of germs and bacteria on any surface.

The gizmo is light and easy to use, and you can just turn it on and go. You might want to start with your hotel bed. Simply set the Cleansebot down between the sheets, turn it on for either 30 or 60 minutes, and let it do its thing. For this type of cleaning you will need to choose the Under Blanket Mode option allowing the device to wheel its way around similar to a robot vacuum cleaner. It will clean in both directions (up and down) at the same time. After its done, place it on top of the blanket and let it continue sanitizing.

There is also a handheld mode which you can use to manually clean surfaces. This is handy for disinfecting toys, cells phones, keyboards, tables, the interior of cars and more. A nice touch is the power-bank mode which allows you to utilize the USB-C port to power any device from the built-in 3700 mAh battery. Useful when you’re on the road.

With nearly a month to go in the campaign and nearly $200,000 in the pot, the modest $3,000 fund raising goal is a distant memory. If you want worry-free traveling, the bacteria killing robot is selling for $109 and up. Check out the video above to see Cleansebot in action.