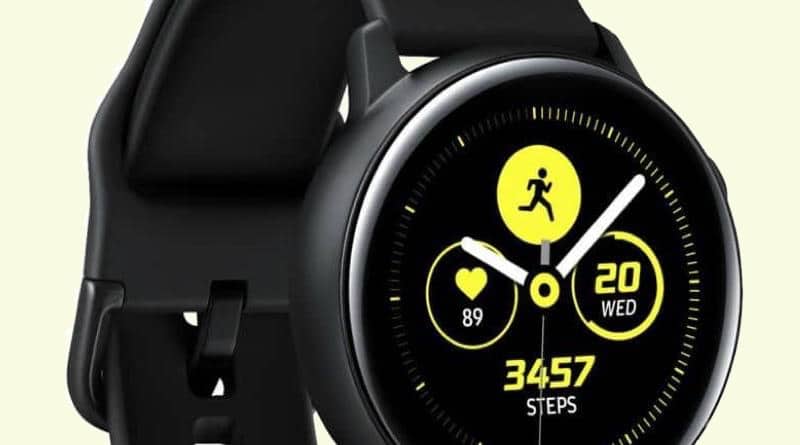 We’ve already seen a number of renders of the upcoming Samsung Galaxy Active (Sport), but now we have a reveal of the full specs and features.

The info was gained from the watch’s firmware files and published on XDA Developers. This shows that Samsung’s device will be called Galaxy Watch Active and not Galaxy Watch Sport, as originally thought. An updated version of Samsung Gear, the name will bring it nicely in line with the Galaxy brand.

The firmware files refer to a smartwatch code-named “Pulse” with the model name SM-R500. Earlier leaks have shown these labels to be related to the upcoming timepiece. As expected, Watch Active will run on Tizen 4.0.0.3.

In terms of specs, the slick looking device sports a 0.1 inch larger display than its predecessor. They both have two physical buttons on the right but the recessed side buttons look better on Gear Sport and are more rounded in shape. Earlier renders show the new watch will lose the rotating bezel of the original.

Gear Active has a more powerful processor (Exynos 9110 versus Exynos 7270 in the Gear Sport), a speaker and an LTE variant. There’s also talk of a dual eSIM model, but this has not been confirmed yet.

Interestingly, the battery capacity of the watch is smaller (230 mAh versus 300mAh) but this doesn’t necessarily mean that battery life will suffer. Components are becoming more power efficient with each passing year so we would be surprised if Watch Active didn’t match its predecessor’s 4 days of battery life (4 hours with GPS switched on).

The other possibility is that the firmware files refer to a small version of the device, hence the lower battery capacity. We are expecting Gear Active to come in different sizes, unlike the Gear Sport which only comes in a 1.2 inch screen iteration.

Some were hoping the codename “Pulse” refers to a blood pressure monitor or ECG. Unfortunately, the renders and leaked specs do not support this. Looking at the list of sensors you get the usual heart rate monitor, accelerometer, barometer and gyroscope. Apart from small differences, a stress monitor seems to be the only notable addition. Presumably this will tap into heart rate variability readings of the heart rate sensor.

Here’s a full rundown on how the two watches compare.