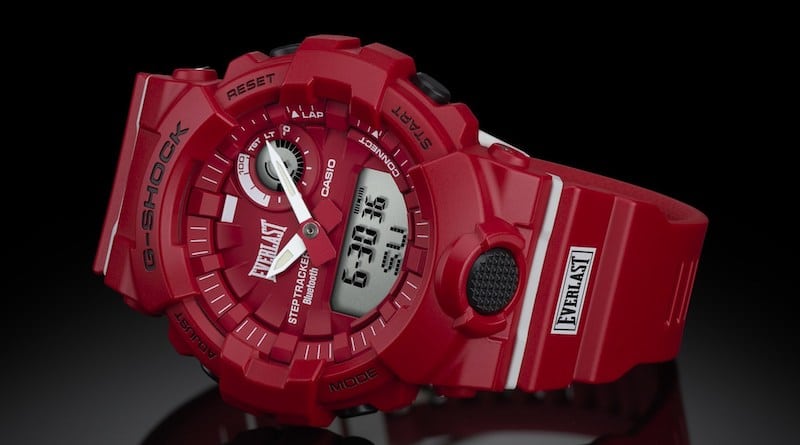 Casio has announced a collaboration with Everlast on an all-new hybrid timepiece for fans of “the noble art”.

For those not in the know, Manhattan based Everlast has been a well known brand in the sport since 1910. It is the world’s leading manufacturer, marketer and licensor of boxing, MMA and fitness equipment. Japanese-based Casio, on the other hand, is a leading multinational consumer electronics company. Its products include calculators, mobile phones, digital cameras, electronic musical instruments and digital watches.

The main design detail of the new G-SHOCK GBA800EL-4A is that it comes in a matte red color reminiscent of boxing gloves. The look is reinforced by the Everlast logo engraved on the back case, dial and band, as well as the model’s LED backlight feature unveiling a “Choice of Champions” motif.

The watch comes with some fitness basics but no advanced sensors such as a heart rate monitor. Its three-axis accelerometer will keep track of steps taken and calories burned. The app also breaks down calories by five metabolic equivalent (MET) levels. There is no built-in GPS but GBA800 will tap into your smartphone’s signal to display the exact location on a map of where your steps were taken.

The hybrid has stopwatch and countdown timer functionality and comes with the ability to set up to 5 daily alarms. Just like other devices in the G-SHOCK range, the fairly rugged device has 200m water resistance and shock resistance.

The GBA800 is expected to retail for $160 when it lands at the beginning of July. You’ll be able to pick it up at G-Shock.com and retailers including Macy’s and the G-SHOCK Soho Store.