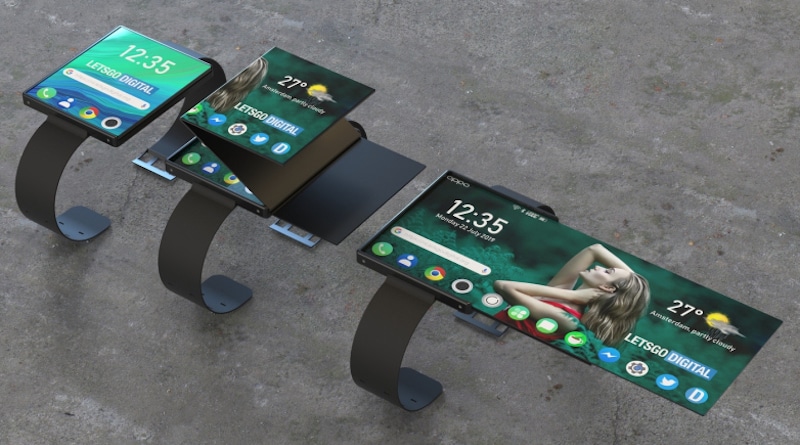 Oppo has been awarded a patent by the World Intellectual Property Office (WIPO) for a crazy looking smartwatch with a foldable display. The concept has been brought to life with stunning renders from Dutch-based LetsGoDigital.

The patent filing titled ‘Wearable electronic device’ dates back to September last year. It describes a watch with a flexible screen that can be unfolded to 200% it’s original size! The display expands in width while the height stays the same.

As shown in the images above and below, the watch has a folded and unfolded mode. When folded, the unused parts tuck neatly away inside the watch case and under the main screen. How much this adds to the bulk of the device, we’re not sure. In this mode the device functions like your run-of-the-mill smartwatch, albeit one with a rather large screen.

In unfolded mode the display extends down the length of the arm you’re wearing the watch on, leaving your other hand free to operate and navigate the device. The watch case has a recessed grove from which the display automatically slides out. A pressure mechanism is used for the unfolding process, and this also prevents the screen from accidentally unfolding itself.

These renders actually look very similar to IBM’s concept for a tablet you can morph into a smartphone or smartwatch. Their device has four compartments inside the watch case, each of which houses 2 screens.

Your wrist watch screen too small? IBM has a solution. Simply slide the extra screens out of the housing. When using four the device morphs into a smartphone. The other display parts remain hidden in the housing. Planning on watching a movie? That should work well on a tablet computer. Unfold all eight screens and you’ve got yourself one.

Just like IBM, Oppo has not said whether it actually has this watch in development. Companies often file for patents which remain in concept stage and never make it to real-world products. Considering the dubious practicalities of a foldable smartwatch we don’t see such a device coming out any time soon. Not to mention the manufacturing difficulties and challenges inherent in coming up with a gadget like this.

We have seen crazier things, though, so nothing would surprise us. Plus, foldable displays seem to be all the rage this year. In time, we are sure someone will release a futuristic-looking smartwatch along these lines. Whether such a device has real-world practicalities? That’s an entirely different question.