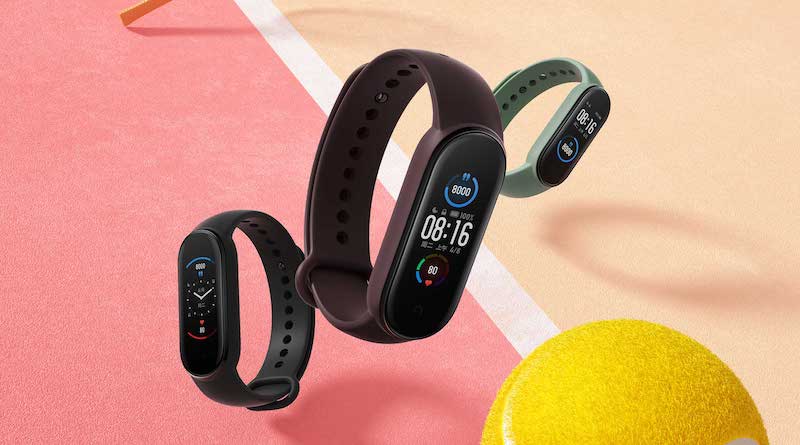 After months of speculation, the Xiaomi Mi Band 5 has officially been announced. In Europe and the US, it’s called Mi Smart Band 5. We’ve seen quite a few promotional images in the run-up to the announcement so we knew what to expect. But there were a few surprises.

The previous generation is the best selling budget fitness tracker in the world and we are sure it will be no different with the fifth iteration. It comes with some handy upgrades over its predecessor. Here’s what they are.

Xiaomi Mi Band 5 and 4 feature a very similar design. They have a rubberized, no-nonsense look so there’s no mistaking what these two are. They come across as typical fitness bands.

Generation 4 introduced a new full colour AMOLED display with 120 x 240 pixel resolution. It is also larger in size than previously coming in a 0.95 inches (versus 0.78 inches). Other features remained pretty much unchanged.

This is the second year in a row Xiaomi has increased the size of the screen, this time by shrinking the bezels. The display on Mi Band 5 is 1.1 inches which apparently allows for 20% more visibility. This also means the resolution has gone up to 126 x 294 pixels. Just like before, the screen supports 100% of the P3 color gamut and comes with a 2.5D tempered glass panel to protect from scratches and accidental drops.

You get more watches faces on the new tracker, some 100+. A few of these are animated with characters from Neon Genesis Evangelion, Case Closed, Hatsune Miku, and SpongeBobSquarePants and there are silicone bands to match.

The excellent 5 ATM rating is the same for both. This means they will survive down to depths of 50 meters.

Under the hood it’s pretty much the same stuff. The devices share a 3-axis accelerometer, 3-axis gyroscope and optical heart rate sensor. There was word Mi Band 5 would get a barometer, but so far we’ve seen no evidence of that.

Next up is the all-important battery life. Mi Band 4 will keep going for up to 20 days on a single charge thanks to its 135 mAh lithium ion battery. Xiaomi has managed to retain this despite the boost in specs, no doubt helped by a more efficient processor. This is for the standard version. The one with built-in NFC is good for two weeks on a single charge.

It’s worth pointing out that the bands are charged differently. On the previous generation the core unit pops out so you can charge it with a proprietary USB cable. In the case of Mi Band 5, charging is done via a a magnetic charging dock. So there’s no need to pop the unit out of the band making everything much less of a hassle.

Here’s a table illustrating all differences in design and hardware between the Xiaomi Mi Band 4 and 5.

The Xiaomi Mi Band 4 is a very decent option for someone looking for a budget fitness tracker. It will have you covered around the clock and can track a wide variety of sports. You get 24/7 heart rate monitoring, tracking of steps, distance travelled, active minutes, calories burned, sleep and inactivity reminders. The new generation gets all that and more.

We’ll reserve judgement until we get a device to test out but we expect Mi Band 5 to perform just as good, if not better than Mi Band 4. For example, the company says its heart rate monitoring is now 50% more precise, and sleep tracking has been improved by 40%.

An advantage of the latest edition is that it comes with 11 sports modes versus 6 of its predecessors. The new ones are elliptical, rowing machine, jump rope, indoor cycling and yoga. This is in addition to outdoor running, treadmill, cycling, walking, freestyle and pool swimming. Each of these comes with its own tracking metrics.

Another thing that works in Mi Band 5’s favor is improved sleep tracking. The tracker can identify problems such as irregular and sporadic sleep patterns, along with REM sleep by utilizing heart rate variability and respiratory information. Users will also get suggestions on how to improve their kip time.

Other additions are Personal Activity Intelligence, better known as PAI. This helps you quantify your activity level by how hard your heart rate worked during the day.

Another addition is female health tracking. The latest generation allows for tracking of menstrual cycles for the first time in a Xiaomi product with a vibration alert for female users. Finally, there’s also a stress monitoring feature that can advise users when to adjust breathing or try to relax.

There’s no Alexa on-board although that might get the cut if a Pro version is released. In China, the tracker supports digital voice assistant XiaoAI that can be triggered by swiping to the right of the display. The rumored pulse oxygen feature is also not there, but once again this might be reserved for the rumored Pro iteration.

Mi Band 5 improves on Mi Band 4 in a multitude of ways. These include a bigger display, easier charging, improved processor and sensors, more sports modes, PAI, female health tracking, the addition of a barometer and more.

The price difference is negligible. Therefore its a no brainer – if it’s a first time purchase go for the newer device. If you already have Mi Band 4 you’ll need to decide if the extra features are worth it to you.