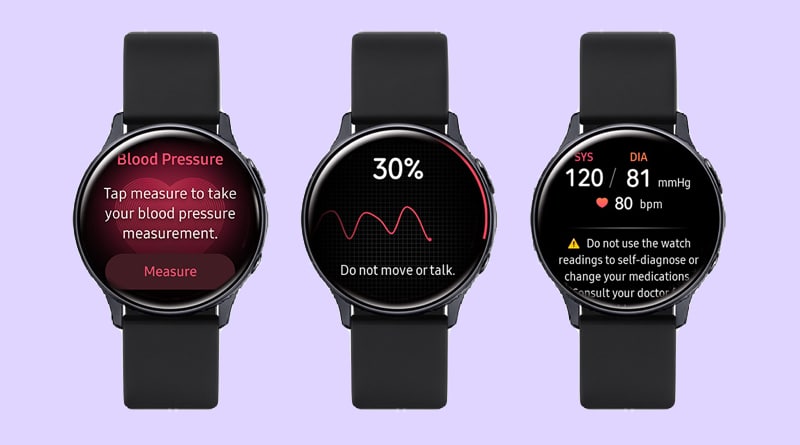 Galaxy Watch Active 2 users in South Korea can, from today, measure blood pressure via the Samsung Health Monitor app. Hopefully, the software will be made available in other countries soon.

The tech giant received the stamp of approval from South Korea’s Ministry of Food and Drug Safety (MFDS) for smartwatches to measure blood pressure from the wrist in April. This comes on the heals of an experimental blood pressure monitoring feature and My BP Lab 2.0 software that ran in a few countries at the start of 2020.

Samsung had said the new Health Monitor app will be available to all sometime in the third quarter of 2020. But it seems to be running ahead of schedule. The rollout has begun with South Korea today. Galaxy Watch Active 2 users in that country can get the blood pressure functionality by installing the new firmware version R820XXU1BTF3. The Health Monitor app is now also available for download in the Galaxy Store.

In order to take measurements, users will need to calibrate the readings from the watch with a traditional blood pressure monitor. Samsung says this should be done initially, and at least once a month afterwards. So it seems this is an approximation of how a real blood pressure monitor works. A reading takes less than 30 seconds to complete and it is done by using the optical heart-rate sensor.

Simply tap the measure option in the Health Monitor app on the watch and your readings will sync to the Galaxy smartphone version of the software. This will provide detailed results and ability to track blood pressure by days, weeks and months. The app will therefore need to be installed both on the watch and your phone.

There are other less known manufacturers which claim to have smartwatches with the ability to take blood pressure measurements, but this is the first big brand to be doing this. Samsung is also the first to receive regulatory approval for the functionality which would suggest users can expect reasonably accurate readings. So this is kind of a big deal.

Eventually, most watches in the Galaxy Watch range will be able to take blood pressure measurements. Samsung is starting off, though, with Watch Active 2 which has its latest optical heart-rate sensor built in.

There’s no word yet on when the feature will be arriving to other countries, but seeing that the software is ready it will depend on obtaining regulatory approval in other markets. Samsung has also promised to add electrocardiogram tracking in the third quarter of 2020. This received regulatory clearance just last month.

The upcoming Galaxy Watch 3 will reportedly have the same features. This is slated for an early August launch.