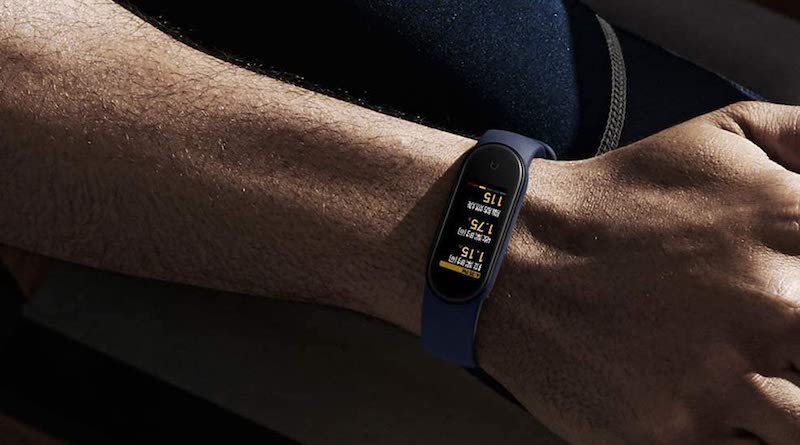 Xiaomi Mi Band 5 is the latest version of one of the most popular fitness trackers in the world. It was unveiled in Asia in June and Europe and other countries a month after.

Amazfit Band 5, on the other hand, is a bit of a surprise. Even though it has the moniker 5, it is not a fifth generation product. Rather, it’s a revamped version of the Xiaomi Mi Band 5. If you’re wondering where the link between the two brands comes from, the maker of Amazfit products Huami is also the manufacturer of the Xiaomi Mi Band 5.

Both of these devices can be bought internationally but there are important differences you should be aware of. Read on to find out exactly what they are.

Put Xiaomi Mi Band 5 and Amazfit Band 5 next to each other and you’ll struggle to tell which is which. They are almost exactly alike. It’s clear that most of the upgrades that come with Amazfit Band 5 are under the hood.

Having said that, there are a few subtle differences.

The easiest way to tell the duo apart is that Xiaomi’s wearable has a circular touch button below the display while Huami’s is an oval one. Another difference is that the Amazfit Band has a slightly larger band adjustment strap. Finally, the Huami product is a fraction larger – not that you’re likely to notice this.

Other than that, the two are pretty much exactly alike. The same 5 ATM water-resistance, along with the same 1.1-inch display with 126 x 294 pixels resolution.

To remind, the larger screen is the main upgrade of Xiaomi Mi Band 5 over the fourth generation (0.95 inches). This is a Colour AMOLED, with 2.5D curved glass protection and brightness up to 450 nits. That’s a pretty decent display for a fitness band, although in sunlight you might struggle to read it.

There was word Mi Band 5 would get a barometer, but so far we’ve seen no evidence of that. Perhaps the tech is there but at the time of writing this article it has not been enabled yet.

Battery life is nearly identical. Both of these devices will run for about two weeks on a single charge and more with power-saving options switched on. That has always been a strong selling point of the Xiaomi product. Charging is done via a a magnetic charging dock. So there’s no need to pop the unit out of the band which is what you had to do with earlier generations of the Mi Band.

As far as functionality, Amazfit Band 5 does everything that Mi Band 5 does and more. So both will keep tabs on your activity, heart rate (deep sleep, light sleep, REM rapid eye movement, sporadic naps) and come with stress monitoring, breathing training, PAI vitality index assessment, sedentary reminder and more. There’s also female health tracking and 11 sports modes on each.

Whichever you choose, you’ll get a decent budget option for tracking activity around the clock. The duo does lack a barometer for floor count and built-in GPS. But you can use Connected GPS, instead, for tracking outdoor runs. It just means you’ll need to have your smartphone during exercise. This also helps to keep the price down.

As mentioned above, the main addition of the Amazfit Band is the ability to track blood oxygen levels. This can be done on-demand at any time. You could call 2020 the year of SpO2 and ECG in wearable tech. We’ve seen many fitness bands and smartwatches adopting the technology.

There was even talk Xiaomi would release a pro variant of Mi Band 5 that will feature blood oxygen monitoring. But that never surfaced. We got the Amazfit Band 5, instead.

The other importance upgrade you’ll get with the Amazfit product is Amazon Alexa compatibility. You can ask Alexa questions, get translations, set alarms, check the weather, control smart home devices and more. Apart from that you get other smart functionality on both such as remote picture taking, music control, find phone, reminders, weather forecast, time, countdown and more.

Amazfit Band 5 and Xiaomi Mi Band 5 are nearly identical. The differences in design are so small you’re unlikely to notice them. The battery life, water-resistance, quality of display and most other things are pretty much the same.

The Amazfit product sells for a few dollars more mainly due to the inclusion of the SpO2 sensor. This allows you to take blood oxygen saturation measurements. The other upgrade is Amazon Alexa compatibility.

The two additions might be important to some, but not others. Nevertheless, it makes sense to go for the Amazfit product as the price difference is negligible. Having said that, both of these products represent decent fitness tracking options that will not break the bank.