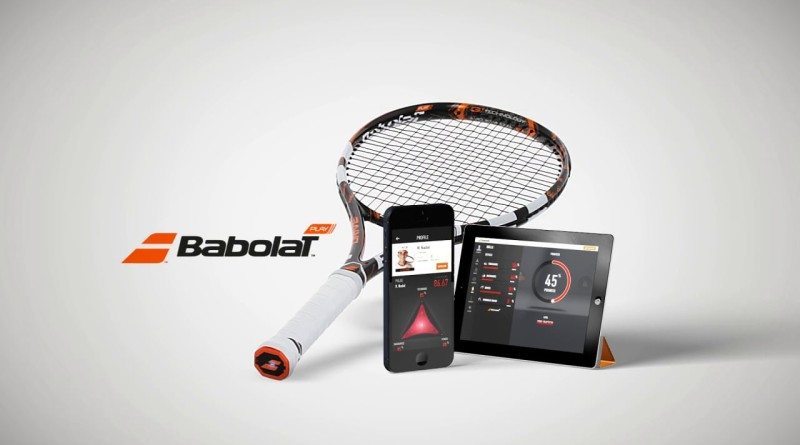 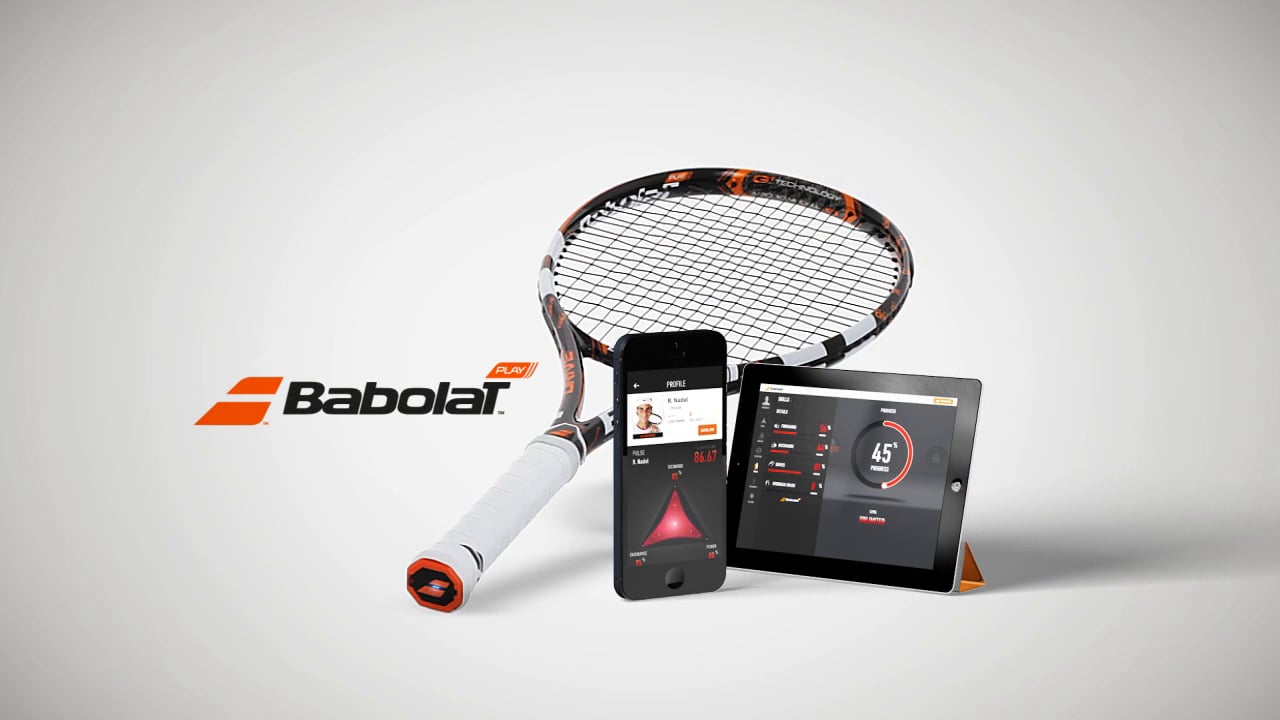 If you hear anything about “the internet of things” and are not quite sure what this is referring to, then this is a glimpse into the future where everything around us will be connected.

Babolat Play Connected tennis rackets come with a sensor embedded in the handle plus a matching app that syncs via Bluetooth, recording details of your playing performance. Thanks to a variety of sensors inside, the rackets analyse your game and spit out information into a mobile app. You are also able to chart your progress toward various skill levels and, if you are brave, or just a very good tennis player, you can compare your performance in a Community section.

Currently there are three rackets in the range:

All three of these rackets play and feel exactly like their ‘more traditional’ counterparts. Read on for our review.

The racket is extremely handsome, graphite and tungsten, light, firm and a very stiff play. It is the kind of racket a beginner, or even a more experienced layer, could only dream about doing justice to. But the data really is compelling.

The Babolat looks like any other racket on the market, but look closely at the grip and you’ll see the sensors that measure the various aspects of your game. At the end of the grip there’s a small door with two buttons: one to turn the racket on and off and another to activate Bluetooth. A blinking LED in the grip shows notifications of the racket’s status. A blue light tells you that the racket is on, a purple light shows when Bluetooth is activated, and a blinking red light warns of a low battery.

Inside the grip, the Babolat Play Pure Drive has accelerometers, gyroscopes and piezoelectric sensors. The accelerometers determine the direction of the racket while the gyroscopes tracks its rotation to analyze the shot you are hitting. Through the ball impact locator feature, the piezoelectric sensor analyzes the vibration of the racket to inform you of the racket’s “sweet spot” (the best place on the racket head to impact the ball). And from there, other components such as the microprocessor translate and record the data and send it to the app. The racket connects to your phone or tablet via Bluetooth, and to your computer using the included USB charging cable

It obviously helps to be tech savvy to use Babolat Play, but it’s not overly difficult to operate. Players need to download an app for their smartphone and then pair it with the racket via Bluetooth or with a supplied USB cable, which is inserted in the handle. The same process can be done with a personal computer or tablet. Once the software is in place, the user needs to set up a quick profile before playing.

In most ways, your tennis session will be no different to when you play with an antiquated racket. But the discreet, blinking light on the end of the racket will remind you that it is recording the sessions. On a full battery charge you can record a little more than five hours of play.

Downloading the information from the racket to the phone takes mere seconds. It is important to make sure you have a valid internet connection – otherwise you may lose information on your latest match win – as we found out the hard way… The bluetooth connection sometimes does not connect automatically, so you may end up manually going into the settings to make sure all is properly connected before downloading your data.

The detail, if we are happy to accept it is largely correct, is fascinating. There are numerous broad categories to digest, including time the ball is in play (always lower than you think…), longest rally, shots per minute, and even an estimation of energy spent. Then you can delve into individual strokes—forehands, backhands, serves, and smashes—to see how many you hit, and then go even deeper to see with how much power, spin, and proficiency. It’s a lot of fun to take apart.

The numbers from that session can then be compared to previous sessions. These numbers are all combined into the user’s overall tennis “Pulse”—a measurement of power, technique, and endurance. The pulse can be looked at for individual practices and matches, and as an ongoing metric that can be compared with fellow users. 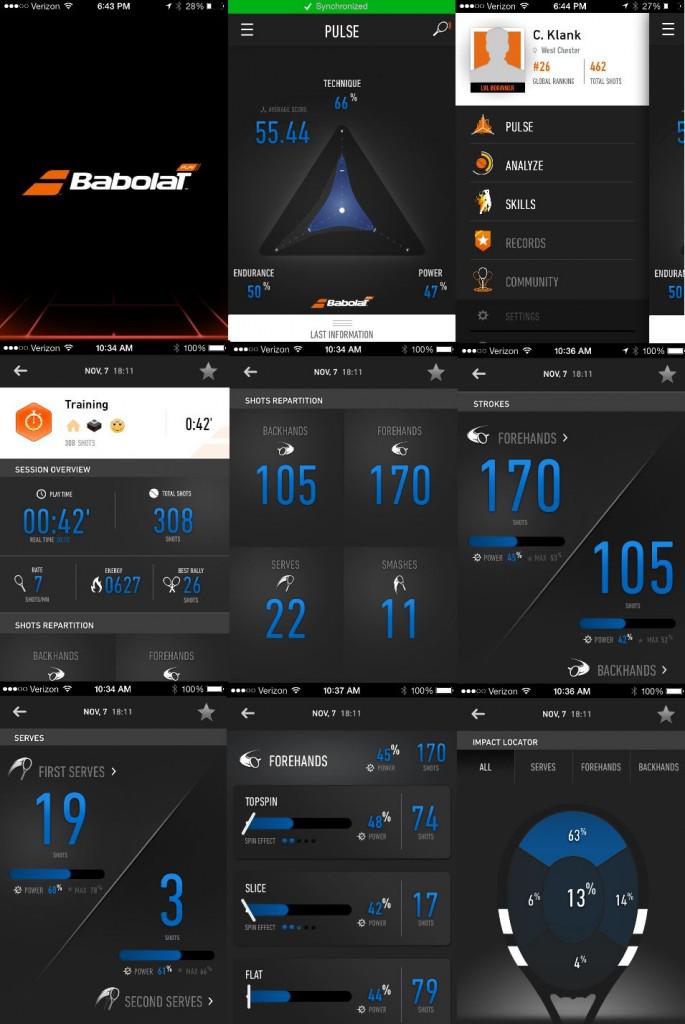 The Babolat Play Pure Drive adds electronics without changing the design of the racket, it has long battery life, and it offers a lot of information about your game while motivating you to play more.

Is Babolat Play flawless? No. But what first-generation device is? Babolat’s range of smart rackets are coming up to two years old. Apart from the serve, power is determined to be a percentage of a certain number; generally a best-case scenario figure that top pros can achieve. We would prefer to see the actual number rather than the percentage. Same for spin generation – there’s a grading of one-to-five tennis balls instead of more detailed numerical feedback.

And while the hardware doesn’t seem to have any glitches—which is most important—there will undoubtedly be a few software bugs such as categorising first serves as second serves on occasion. After hitting a first serve, there’s a three-to-10 second window that senses if another serve is hit; if so, it’s recorded as a second serve. However, these are minor, fixable flaws, and no one at Babolat is claiming upgrades won’t eventually be in order. They realize it’s a work-in-progress and there will be tweaks along the way.

So maybe its time to trade in those tennis lessons, and adopt a more techie approach to improving your game. And if it doesn’t help you improve your tennis game, the Babolat Play Pure Drive racket will at least motivate you to play more. And that by itself is a good thing.