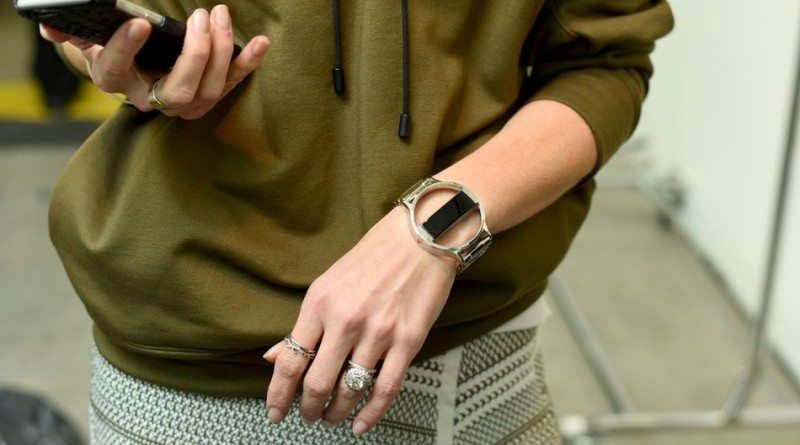 Fitbit’s activity-tracking bands are designed for health and fitness, but the company is trying hard to make them look more fashionable. As part of this effort, the leading global wearables manufacturer announced a partnership with New York fashion house Public School. The aim of the partnership is to bring more style to Fitbit’s new Alta fitness tracker.

The creative duo Maxwell Osborne and Dao-Yi Chow has revealed some of the early concepts at the Public School Autumn/Winter 2016 Women’s Collection runway show during New York Fashion Week. The images in this article give a flavour of the new designs.

Essential reading: Everything you need to know about the new Fitbit Alta

Aparently, we can expect a range of stylish accessories that will help Fitbit’s latest activity tracker blend in and stand out. The new design aesthetic take advantage of easily interchangeable accessory bands featured on the new fitness tracker.

A spokesperson for Fitbit said the bands are “designed for the runway and will give a feel for the direction you’ll see in retail later this year.”

This is not Fitbit’s first partnership aimed at bringing fashion to its line of wearables. In 2014, it launched a line with designer Tory Burch. Public School is, however, likely to bring more of an edge and attitude to its previous designs.

“Public School’s approach of bringing the street aesthetic to the runway combined with Fitbit’s mission to fit fitness into your daily life produced an authentic, integrated collaboration with a strong mutual vision,” said Tim Rosa, Vice President of Global Marketing at Fitbit.

“The result is a collection of unique design concepts for Fitbit Alta that share a focus on accessibility, function and versatility for everyday life…”

The new collection will be broken down into premium and accessible lines and there will be styles aimed at both men and women.

“As we work with Fitbit to design the collection for Alta, our goal is to create accessories that inspire, delight and have the versatility to become a modern extension of our users. Together with Fitbit, our vision is to help people move effortlessly from day-to-night with a look that reflects their unique style and attitude…” said Dao-Yi Chow and Maxwell Osborne.

The Fitbit Alta, which hits stores in March and will retail for $130, targets casual wearers. It can be preordered now on Amazon US.

This is part of a push by Fitbit to capture a broader market of wearables, to which fashion is important. Although it is the global leader in wearables sales at the moment, Fitbit risks losing customers if it doesn’t keep pace with its competitors in terms of looks.