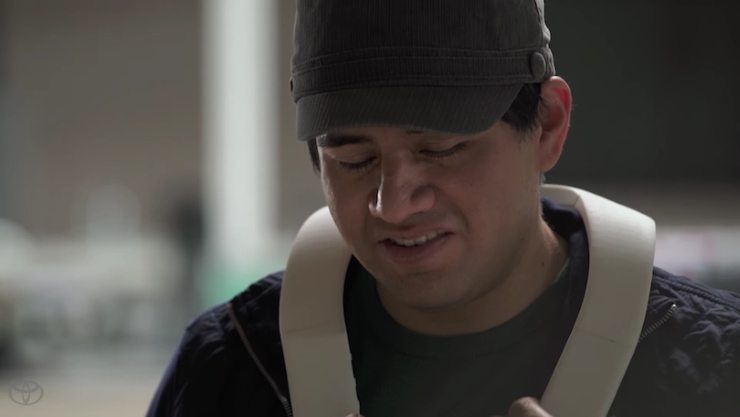 Toyota’s robotics division is developing a wearable device that could benefit the blind and visually impaired, the manufacturer has revealed.

The device, which is worn on the shoulders, uses cameras that the auto giant claims can recognise surroundings, such as escalators, stairs and doors, and then directs the wearer with audio and haptic cues. The wearable will also contain voice recognition features and buttons that let users interact with it.

This is all part of Project BLAID, details of which were released earlier this week. Apparently, the company plans to expand the feature set to introduce mapping, object identification and facial recognition in order to give users a a better understanding of the world around them.

The Japanese automaker said the device was not meant to replace aids currently available, but to help fill the gaps left by canes, dogs and basic GPS devices by providing users with more information about their surroundings.

In a video posted online, a Toyota spokesperson briefly explains how the device’s cameras help it detect objects.

“Project Blaid is one example of how Toyota is leading the way to the future of mobility, when getting around will be about more than just cars,” said Toyota executive Simon Nagata. “We want to extend the freedom of mobility for all, no matter their circumstance, location or ability.”

The firm said that, as part of the project – “it is launching an employee engagement campaign that invites team members to submit videos of common indoor landmarks. These videos will subsequently be used by developers to ‘teach’ the device to better recognise these landmarks.”

“Toyota is more than just the great cars and trucks we build; we believe we have a role to play in addressing mobility challenges, including helping people with limited mobility do more,” said Doug Moore, manager of partner robotics at Toyota, in a blog post on Monday. “We believe this project has the potential to enrich the lives of people who are blind and visually impaired.”

Toyota is not the first company to announce an initiative of this kind. Last year, Microsoft, in collaboration with the British charity Guide Dogs, revealed a smart headset geared toward helping visually-impaired people navigate their way around cities.

The auto giant has not set a release date yet, but the company said the first devices will start beta testing in the near future.