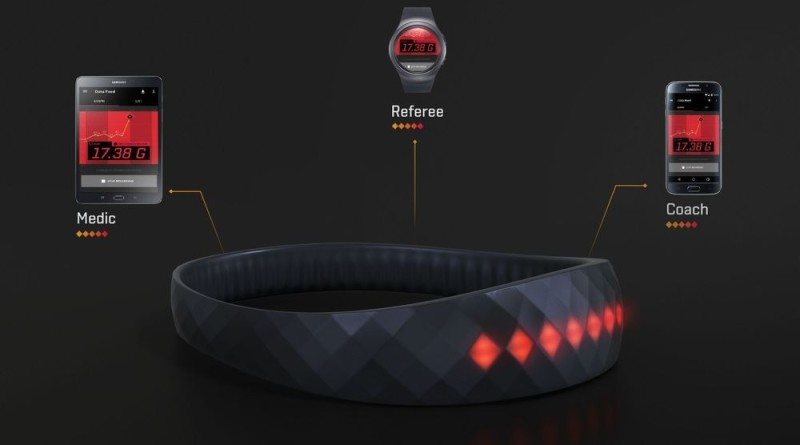 A new piece of wearable technology created by Samsung Australia promises to monitor head contact in sports in real-time. The aim is to use this data to better understand concussion in sport and the ongoing impact on the brain.

The brainBAND, of which ten prototypes have been created, is a rubber strap that houses sensors at the back of the head that measure the force of an impact. LED lights on the band light up in different colour depending on the seriousness of the hit. This information would then be relayed via an app to medics, referees and coaches, all in real-time.

Samsung Electronics says the brainBAND is the work of Dr. Alan Pearce, a neuroscientist heavily involved in concussion research and education, and Braden Wilson, an industrial designer. The concussion project was first announced in October 2015. Since then, Samsung has released a series of videos documenting the development of this prototype.

“The ultimate goal is that by understanding the dangers of repeated concussions, brainBAND may help prevent life changing injuries at every level of the game, and protect the next generation of players,” Dr Pearce said.

Israel Folau stated, “I think it’d be great if every player in Australia had access to this kind of technology to make contact sports safer for current and future generations.”

“Concussion is a big issue in not just our game but all contact sports and I believe anything that raises awareness of concussion and its dangers is a good thing.”

Addressing the issue of head injuries in contact sports has been a hot topic recently. It was also the subject of Will Smith’s 2015 film Concussion. The American sports medical drama is based on the true story of Dr. Bennet Omalu, a Nigerian forensic pathologist who fought against efforts by the NFL in America to suppress his research on chronic traumatic encephalopathy (CTE) brain damage suffered by professional football players. CTE can cause a loss of movement skills, memory issues, aggression, anxiety, depression, dementia and in some tragic cases, suicide or death.

Samsung told Mashable Australia that they have given a grant to Wilson and Pearce to continue their research and explore the possibility of making a version that could be put into production. The effects of concussion for athletes can be serious and research into tracking and reducing concussion effects is definitely a worthwhile effort.