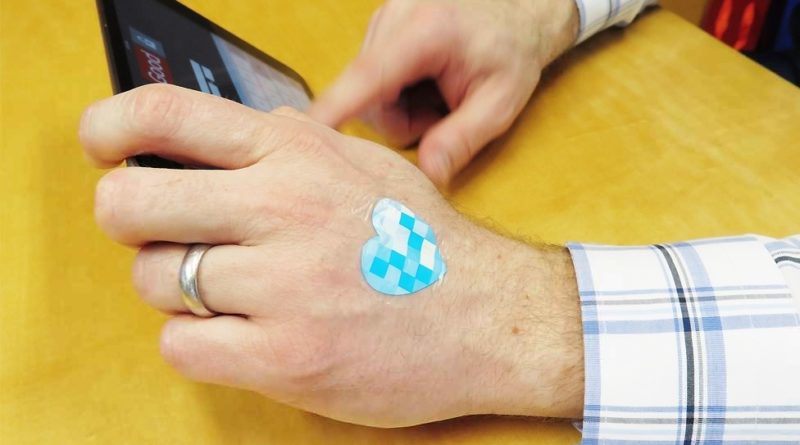 Future L’Oréal products might not be in traditional cosmetics, but wearable technology capable of sending information to a customer’s smartphone. The French cosmetics company became the first beauty company to enter the stretchable electronics field, when earlier this year they debuted a stretchable UV monitor.

L’Oréal’s My UV Patch (pictured above), is designed to monitor UV exposure and help consumers educate themselves about sun protection. Measuring approximately one square inch in area and 50 micrometers thick, the patch works similar to a removable tattoo or a nicotine patch, sticking to the skin for five days. Once applied, the wearable is showerproof, has no batteries, and there is no initial cost or ongoing cost to the patches.

The wearable contains photosensitive dyes that factor in the baseline skin tone and change colors when exposed to UV rays. Consumers will be able to take a photo of the patch and upload it via NFC (near-field communication) to the La Roche-Posay My UV Patch mobile app, which analyzes the varying photosensitive dye squares to determine the amount of UV exposure the wearer has received.

My UV Patch is expected to be made available to consumers later this year. Best of all, L’Oréal says the patches will made available at no cost in 15 different countries including the US and the UK. The patch was unveiled at the Consumer Electrics Show in Las Vegas in January.

“Previous technologies could only tell users the amount of potential sun exposure they were receiving per hour while wearing a rigid, non-stretchable device,” said Guive Balooch Global Vice President of L’Oréal’s Technology Incubator.

“The key was to design a sensor that was thin, comfortable and virtually weightless so people would actually want to wear it.”

The more than a century old company started working on wearables and other tech products three years ago, after setting up a technology incubator, a business division dedicated entirely to technological innovation. Its first product was a virtual cosmetics app called Makeup Genius, designed in partnership with Image Metrics. My UV Patch has been developed by a team of 25 scientists and researchers working in several cities around the world, including New York, Paris and Singapore.

It is highly unlikely that right now, you associate L’Oréal with cutting edge wearable technology, and it may take a few more innovative projects such as this one before you do. At the moment, this is one of few cosmetics companies using technology to promote a healthier lifestyle. In time, we expect companies such as L’Oréal will begin to made a dent in the cosmetics and beauty marketplace with wearables.