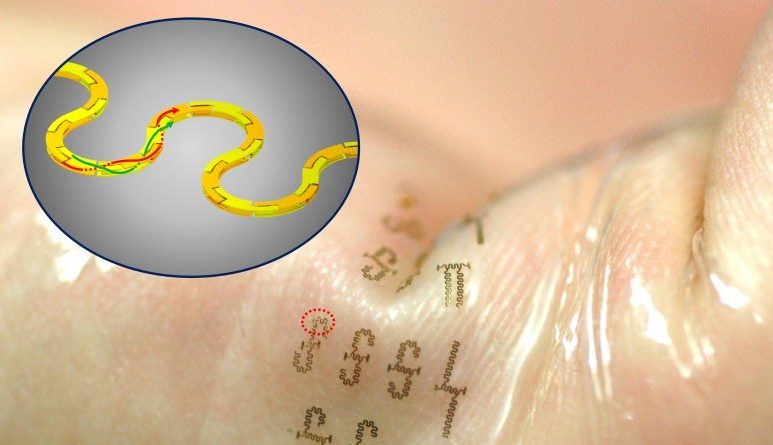 The unstoppable march of science and technology is creating smaller, lighter and more powerful wearables which soon may become part of your body.

Now, a team of engineers at the University of Wisconsin-Madison, led by professor Zhenqiang “Jack” Ma, have created the world’s fastest stretchable, wearable integrated circuits that are so small, they can be applied directly to the skin. The ‘temporary tattoo’ would essentially allow doctors to monitor their patients without the need for wires and clips.

“We’ve found a way to integrate high-frequency active transistors into a useful circuit that can be wireless. This is a platform. This opens the door to lots of new capabilities,” says Ma.

These circuits can support frequencies in the .3 gigahertz to 300 gigahertz range, which falls in the new 5G standard. The 5G technology, in addition in being used for the next generation of mobile phones, will also find application in the biomedical field. It could, for example, allow health care providers to monitor their patients wirelessly via the wearable integrated circuits, limiting the need for patients to come into the doctor’s office.

What makes the new, stretchable integrated circuits so powerful is their unique structure, inspired by twisted-pair telephone cables. They contain, essentially, two ultra-tiny intertwining power transmission lines in repeating S-curves. This serpentine shape, formed in two layers with segmented metal blocks, like a 3-D puzzle, gives the transmission lines the ability to stretch without affecting their performance, said the study.

The integrated circuits are only 25 micrometers thick, which means they have a much smaller footprint than those developed by other researchers, whose widths typically approach 640 micrometers.

The team of researchers led by UW-Madison professor Zhenqiang Jack Ma published the details of the new integrated circuits in the Advanced Functional Materials journal on May 27.