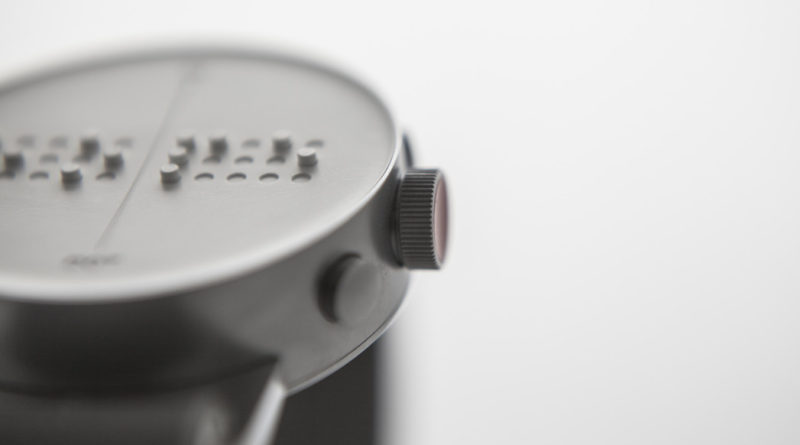 After three years of ups and downs, the Dot Watch Braille Smartwatch will finally begin shipping next month.

Created for the visually impaired, the gadget is the world’s first smartwatch with the ability to to deliver information via a unique tactile watch-face instead of visual clues. The device enables users to accept calls, check messages, the time and set alarms via a Bluetooth connection to other smart devices. Up to now, most assistive smartwatches for the blind have relied on audio prompts.

Dot Watch uses a dynamic Braille face that incorporates four cells of six tiny moving components that display characters on the screen. Due to space constraints, the gadget is only able to display four characters at a time, so its not really suitable for longer text formats.

A lot of thought has obviously been put into the design. and it’s clear that attention has been paid to every detail. Made of 6000 series aluminum the watch comes in at only 33 grams. Housed in the 43mm case is a li-polymer 400mAh battery that keeps going for around 7 days before needing a recharge.

Dot, the South Korean startup behind the watch, has been trying to overcome various manufacturing difficulties since the product was announced back in 2014. Eric Ju Yoon Kim, the founder of the outfit, says that 100,000 of the watches will be made this year. Apparently, there are already 150,000 pre-orders from 15 countries, including one from musician Stevie Wonder. The company has revealed it is also working on a tablet-like device with a dynamic Braille face that would serve as an e-reader.

Tp learn more, watch the video below or head over to Dotincorp.com.