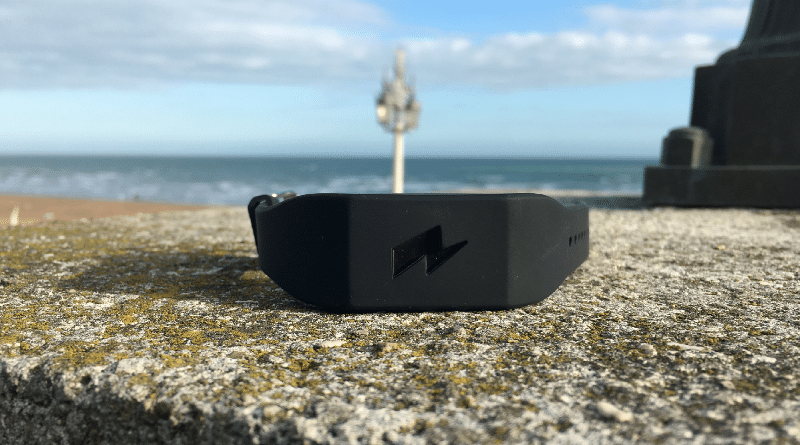 We all have a bad habit or two we could stand to lose, but habits are hard to break. Some of these, such as smoking and too much snacking, can even be detrimental to our health. Pavlok is a device that wants to help you break these nasty habits.

Its a simple concept. Using classical conditioning techniques, the wearable administers a negative stimulus when a user does an undesired action. You then start to associate the negative stimulus with the bad habit, and over time develop an aversion to the habit. At least, that’s the theory.

Pavlok came out of a successful crowdfunding campaign back in 2014, which raised over $280,000. After three years of research and more than 45,000 users, the Boston based outfit is back on Indiegogo raising funds for a new and improved device.

The second generation Pavlok 2, also called Pavlok Rise, throws in some new features to reward good behaviors and stop bad ones. And once again, the company is doing well on the crowfunding platform and has surpassed its funding goal many times over.

With just a few days left in the campaign and delivery set in a few months time, I thought I would run the original Pavlok through its paces. What follows are my impressions.

Pavlok comes with the main module, a silicone wristband, USB charging cable and a couple of little instruction booklets. In terms of looks, the wearable resembles your run-of-the-mill fitness tracker. People will probably think you’re wearing a Fitbit, which is good because you won’t need to explain why you’ve strapped a shock collar to your wrist! 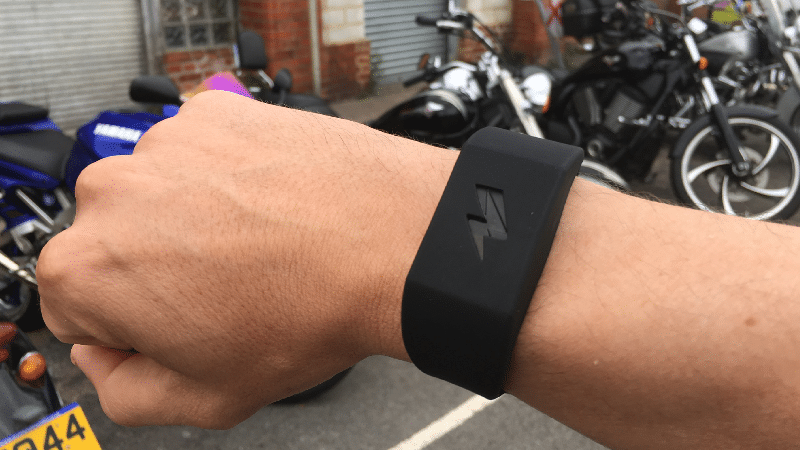 The square module, which resembles a small battery, slips neatly and securely into the wristband. This is not a device you should be wearing 24/7. Rather, its designed to be used only a couple of minutes per day to help you gradually wean yourself off those annoying bad habits. 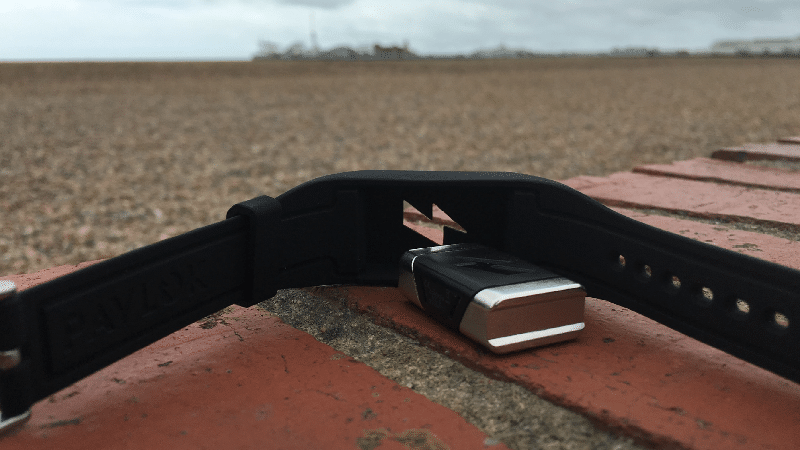 The wristband comes with a very comprehensive smartphone app, which takes a bit of getting used to. To start off, you need to determine the bad habit that you want to eliminate. The app lets you choose from a list that includes snacking, smoking, nail biting, craving and hair pulling. If your habit is not on the list, train the wearable and program in your own.

Then its a matter of strapping Pavlok to your wrist for 5 minutes each day and pushing through the full 5-10 days which the company says is usually enough to break most bad habits.

Before you get too excited, there are some caveats to understand. This is not a magical solution that will fix all your bad habits overnight. You do need to make a commitment to wearing the device a few minutes each day and zapping yourself whenever you perform an undesired action.

Each time you do this, the wearable releases electricity, ranging from 50-450V. This quickly gets your attention and triggers the brain out of automatic mode. Your ability to hold yourself accountable makes or breaks this product.

To say the feeling is unpleasant is a bit of an understatement! Thankfully, the app allows you to adjust the strength of the zap on a percentage scale, or even switch it off entirely. After a few days of use, you should start to feel an aversion to the bad habit. 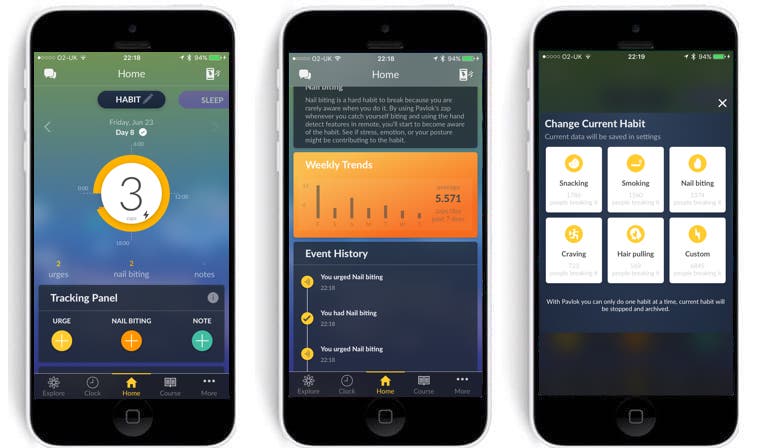 There are also some extras. For example, Pavlok is able to sense when you bring your hand near your face and send you a vibration. This can be useful to help identify, for example, instances of nail biting or playing with your hair. Unfortunately the “Hand Detect” feature did not work 100% of the time for me. I would estimate that it worked around 60-70% of the time.

And this is perhaps my main gripe with the product. The fact that you are meant to force yourself to do a bad habit, and then self-administer the zaps. Ideally, you would want something capable of automatically recognising you are doing an undersired habit, and then administering the punishment for you. 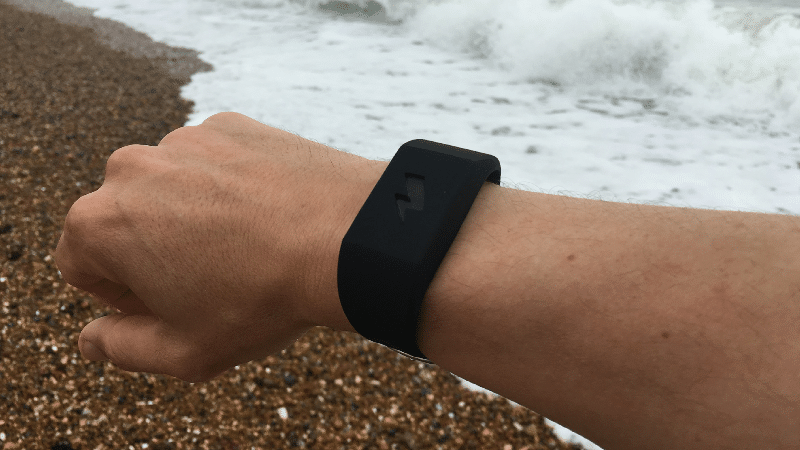 It seems that the Boston based outfit has also recognised this as something that could be improved. The upcoming Pavlok 2 has been redesigned from the ground up to automatically track behavior throughout the day, alerting you along the way when you’re about to do a bad habit.

The second generation wearable can auto-detect nail biting, smoking, chewing/eating, hair picking, scratching or touching your face. This is certainly a welcome addition, and we look forward to September, and testing out the new device.

I am also not a huge fan of the current app. While its certainly feature-rich, it comes across as a bit clunky. And there is something to be said for simplicity. Lets hope we get a new and improved app to go along with Pavlok 2. 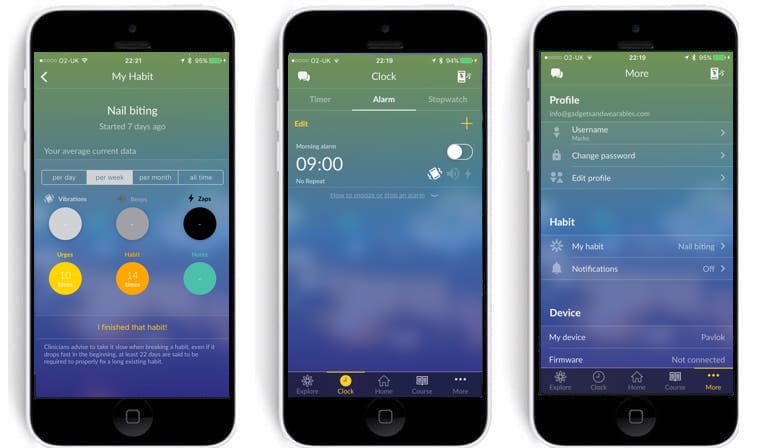 Another feature that is worth mentioning is the alarm feature. From your smartphone, you can trigger Pavlok to wake you up with a vibration, beep or a zap. Which means, if you are a heavy sleeper and often find yourself snoozing, a zap might be the stimulus you need to roll out of bed. In fact, it will probably get you to leap out of bed!

Pavlok works on the principle of classical conditioning. Electroshock therapy has been proven to be very effective, not only at breaking bad habits, but even with breaking chemical addictions.

You could of course use the poor man’s version. A rubber band around your wrist which you can pull really hard so that it snaps against your skin. But the loud snapping sound is not really appropriate for an office environment and its much simpler to tap yourself on the wrist to administer punishment.

So does it really work?

The device certainly does what it says on the tin. It allows you to keep tabs on your bad habits and self administer aversion therapy, i.e. punishment to help you break them. But you would have to be a stickler for punishment to use as intended, or really struggling to break your bad habit.

One thing you will find it very useful for is obsessive thinking. If you get caught up in a loop of some counter-productive thoughts, zap yourself and your brain will shift focus immediately. 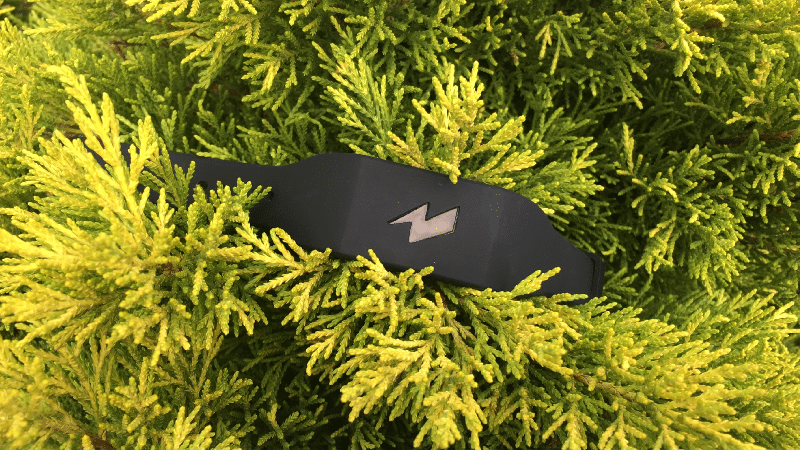 I’ve waited a couple of weeks before writing my review because I’ve seen that some people were having issues with Pavlok not zapping or syncing. A few have even opted for a replacement version. I’m happy to report, mine has worked just fine throughout the two week testing period, and I’ve experienced no problems with the device or the software.

Looking forward, I am actually much more excited about the upcoming second edition. By auto-monitoring and alerting to bad habits, Pavlok 2 sounds like a much more useful device. Other improvements are new sensors, an upgraded Bluetooth antenna and a new processor, making it hundreds of times faster than the original.

Furthermore, Pavlok 2 will double up as a pedometer. It will count your steps and nudge you to move with a warning beep if you’ve been sitting for 30 minutes. If you’re still on the sofa after 60 minutes, the electric zap should get you up and about.

And, the second generation wearable has more sophisticated sleep features. It will wake you up when you are in the lightest stage of sleep, and just like the original, prevent you from snoozing. You’ll get notifications when its time for bed for an optimal night’s sleep, and your sleep statistics will be displayed in detail in the accompanying smartphone app.

This product is certainly not for everyone. It works on an individual level and depends how dedicated you are to using it.

The zap function does work, and it works well. If you’re okay with self administering punishment Pavlok may be the product for you. If you don’t have the constitution to zap yourself, your results will be seriously hampered. In that case you may be better off waiting for Pavlok 2 which will do this for you.

As mentioned, don’t expect a magic solution to your problems because ultimately it will be down to you to do the heavy lifting. Pavlok will not work for those who are not totally committed to breaking their habits and is more of an aid to give you that extra push.

One thought on “Review: Pavlok, zap yourself into breaking bad habits”