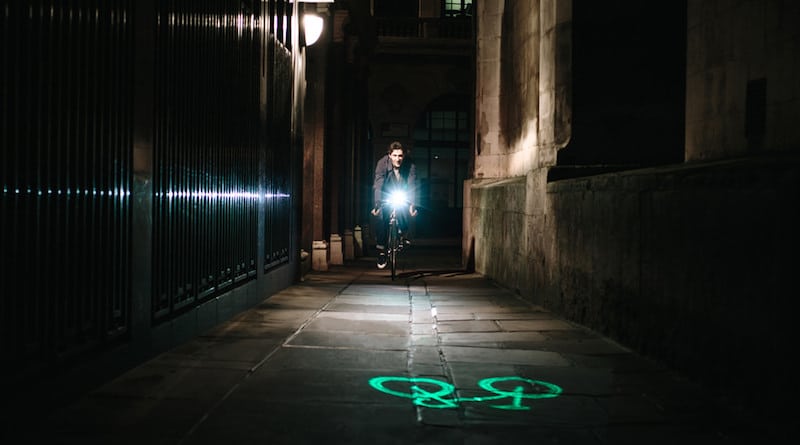 You can never be too safe when cycling, particularly if you live in an urban area. Bicycle accident fatalities account about 2% of all traffic-related deaths in the US and most of these are caused by motorists.

While the figure may not seem like a lot, consider the following – cyclists are 15 times more likely than drivers to be killed on the road. Whats more, many cyclist injuries go unreported to the police, even when the cyclist is taken to a hospital.

A new Kickstarter campaign wants to help lower these figures. The Laserlight Core is a small flashlight that attaches to the handlebars and projects the symbol of a bike 6 meters ahead of the rider.

In order to do this, the gizmo integrates laser projection technology and white light. This enables it to beam the image to blind spots, junctions and situations where you’re otherwise unseen. The company says third-party research has shown the light makes you up to 32% more visible to approaching traffic and pedestrians.

This is actually British-based Beryl’s second time around on Kickstarter. The first version of Laserlight was launched back in 2012 as Blaze. Those of us that live in London have seen it on the road as its quite popular here. Now the cycling technology company is back with a product that’s been re-engineered from the ground up.

At 400 lumens, the light is brighter than before. In fact it even gives you visibility during the day. You can also be safe in the knowledge Laserlight Core has a water-resistance rating of IP54. This means you can ride with it through winter and wet days.

Battery life depends on your laser and lumen settings (this ranges from 150 to 400 lumens), and can last anywhere between 1.5 hours and 41 hours. Charging is done via a standard USB cable.

The Laserlight Core is very lightweight coming in at just 100g with its bracket. It measures 10.6cm end to end, is 3.3cm wide, and 3.9cm tall. No special tools are required to attach the light.

Cyclists obviously have safety concerns as just a few days in, the Kickstarter campaign has smashed through its $50,000 goal. With 28 days to go there is still plenty of time to contribute. Delivery to backers is scheduled for December.