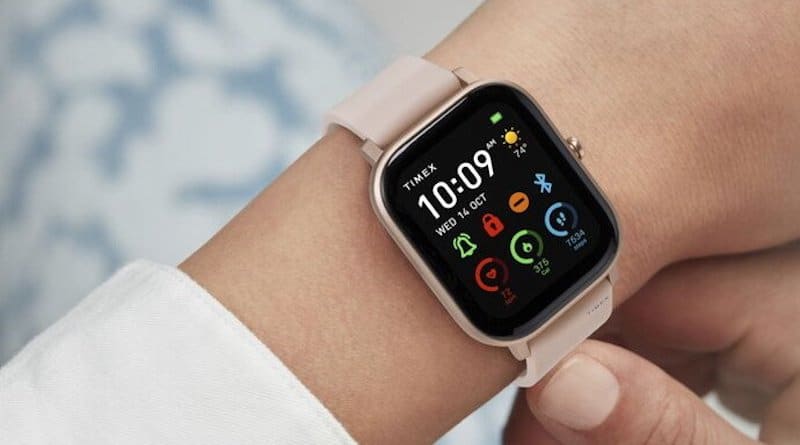 Timex has released a new collection of smartwatches. These consist of the round faced Metropolitan R and square shaped Metropolitan S. The devices have a lot in common with Huami’s Amazfit range.

This is not entirely a surprise. In fact, we broke the news back in April on Huami’s FCC certification for two iterations of a Timex-branded smartwatch called Metropolitan.

To remind, the duo entered into a strategic partnership over a year ago. Huami is providing the manufacturing know-how and Timex the well-recognised brand.

The first product that came as a result of this linkup was the $120 Ironman R300 GPS. Launched in February 2020, it comes with continuous heart rate monitoring, built-in GPS and guided coaching features. There’s an always- on display and the usual fitness and sleep tracking tracking smarts.

Now we have incoming more Timex-branded smartwatches as part of Timex Smart. There are four iterations in the R and S series two of which are square, some round.

The Metropolitan R has a 42mm circular case, 1.2-inch AMOLED touchscreen, and a choice between an always-on display and raise-to-wake function. It weighs a mere 39 grams, and that’s with the 20mm strap.

Don’t be surprised the device does not use Wear OS. The linkup with Huami means it is using its proprietary system, the same that can be found on the Amazfit line of watches. In fact, the Metropolitan R very much reminds of the Amazfit GTR and seems technically the same. Just like the Metropolitan S which appears to be almost identical to the Amazfit GTS.

As far as other specs, the watches come with a swim-proof 3 ATM water-resistance rating, built-in GPS, along with the usual fitness tracking sensors including heart rate. No NFC, though.

Battery life is an excellent 12 days between charges on the Metropolitan R. The S version will keep going for up to two weeks. Refuelling is done via the magnetic connector that attaches to the back of the watch.

This is not be the first Timex watch under the Metropolitan moniker. There was one back in 2015 called Metropolitan+. It was a fairly basic affair and represented the brands entry into the smartwatch space. However there’s been little to show since then. This year and the linkup with Huami is out to change that.

The watches can be picked up for $179 on the Timex website. You can purchase the Metropolitan R in a choice between gunmetal with a brown and black strap, and rose gold with a pink coloured strap. This last one is also an option for the S version, along with a black case with a black strap iteration.

“We are excited to introduce another edition to our Timex Smart franchise. This new collection delivers on performance and one of the longest batter life on the market today.” said Shawn lawson-Cummings, SVP Advanced Technology & Sports, Timex Group.

“The Metropolitan collection for men and women combines the ease of soft-touch navigation and performance monitoring, delivering beauty and brains, as is expected for today’s smartwatches.”