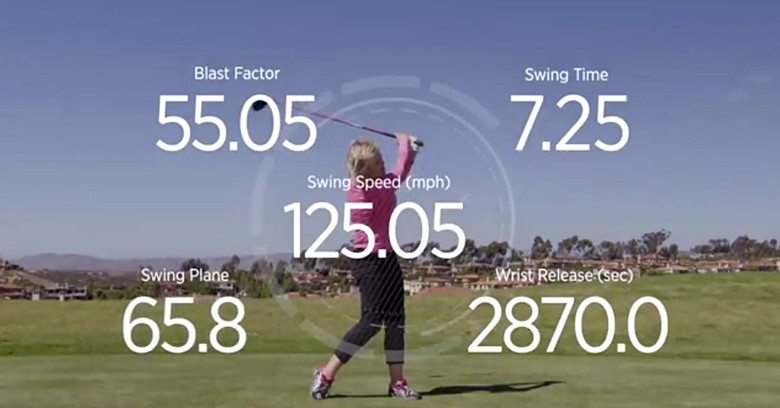 Collecting precise data on an athlete’s mechanics has been part of professional sports for a while, but was out of reach of the average amateur athlete until recently. Today, there is no shortage of hi tech devices that promise to take your golfing skills to the next level.

Blast Motion Golf is a tiny device that attaches to most putters and drivers and automatically activates when it detects movement. The removable sensor which houses a combination of accelerometers, gyroscopes, and magnetometers, records a variety of metrics. Its proprietary algorithm allows it to detect swing speed for driving, and loft and lie for putting, for example. The data is then available for instant review or can be stored for later use.

Blast Motion Golf incorporates bluetooth technology to send the recorded data and analytics to smartphones or tablets during play. The app integrates with video captured from your phone or tablet and will overlay data so you can visually analyse your game. The device will not iron out your swing, it’s only there to show you the wrinkles. It is worth noting, when compared to some other sensor devices on the market, Blast lacks the three-dimensional rendering of the swing. Instead, the Blast app revolves around video.

“You’ll find other solutions out there really overwhelm users with numbers, which is both good and bad, because if users don’t know which number to focus on, you’re not really helping them, you’re actually potentially making it worse,” Donovan Prostrollo, Senior Director of Marketing of Blast Motion said.

The technology also allows users to identify trends through stats and graphs that the accompanying app churns out. These performance metrics can than be immediately uploaded to share with a coach or posted on a social network to compare with other users.

“We’re combining motion metrics with video to create a very personal user experience, where golfers can literally ‘see’ the mechanics of their swing, and socially share their long and short game in a whole new way,” Prostillo said.

What distinguishes Blast Golf from other devices on the market is the accuracy and consistency of the device. This means that identical swings produce identical sensor readings which apparently made a big difference to the professional athletes the company collaborated with.

“In the past, elite athletes had access to this technology, but your general consumer didn’t,” Prostrollo added.

“So they couldn’t get that same competitive edge and become a superstar.”

Blast Motion, a relatively new company which began in Carlsbad, California five years ago, also produces attachable sensors for other sports including basketball, volleyball and skateboarding. Interestingly, before entering the sports world, their focus included military and medical products.

“We didn’t approach this as trying to design a swing sensor or a specific sport product,” Prostrollo said.

“What we designed it to do was to be a natural motion capture product, and then we applied that to different sports, so it doesn’t pigeonhole our product.”

Looking to the future, Prostrollo said the biggest change would not be on the technological side but rather on the adoption side, as wearable sensors like Blast become more and more common among both amateurs and professionals.

The Blast Motion Golf precision motion sensor weighs less than half an ounce and easily attaches to most regulation putters without impacting a player’s stroke. The device is available at several sporting goods stores and Amazon.