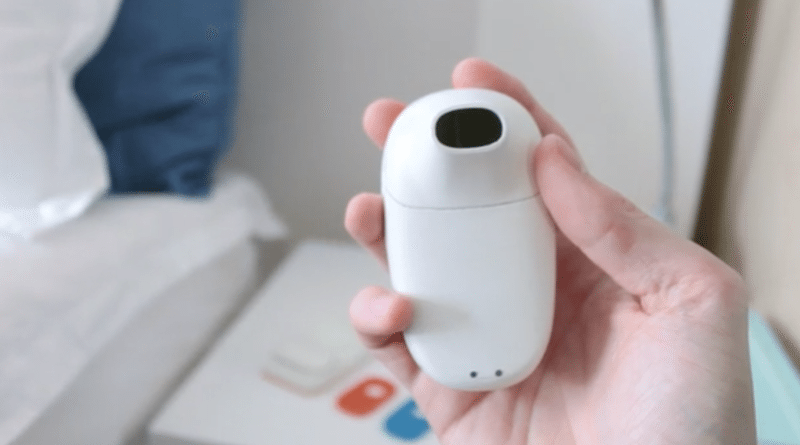 A wearable that tracks and records the user’s respiratory health and medication use has received the James Dyson Award, and international student design award that challenges young people to, “design something that solves a problem.”

The device was submitted by Katherine Kawecki, a student from the University of New South Wales. The wearable represents a complete redesign of existing aerosol inhalers coupled with a world first wearable patch that tracks respiratory health.

Asthma is the inflammation of the airways when exposed to environmental triggers or stress. An estimated 300 million people worldwide suffer from the condition, with 250,000 annual deaths attributed to the disease. Low and middle income countries suffer the most severe cases. It is estimated that the number of people with asthma will grow by more than 100 million by 2025.

“All of those deaths are preventable,” Ms Kawecki said.

“There seems to be a trend for underestimating your condition.”

The system consists of a bluetooth enabled smart inhaler, wearable device and docking station that communicate wirelessly with the smartphone app. Ms Kawecki, an asthmathic herself, said the wearable patch sits on the skin similar to a stethoscope and monitors changes in the upper respiratory tract. The patch does this through piezoelectric sensing picking up wheeze frequencies, flux in inspiration/expiration ratio etc.

“You might not notice an attack coming on because you’re busy at work during the day so the wearable patch monitors your breathing and gives you haptic (vibrating) feedback,” she said.

“If you’re wheezing, it will tap you twice, and keep you aware of your health.”

Asthma requires constant self monitoring. On a busy day it can be confusing when to medicate and which medications to use. The smartphone app makes this easier by sending reminders and tracking medication use.

There is a working prototype of the device and Ms Kawecki is now looking for funding to bring the asthma tracking patch to market.