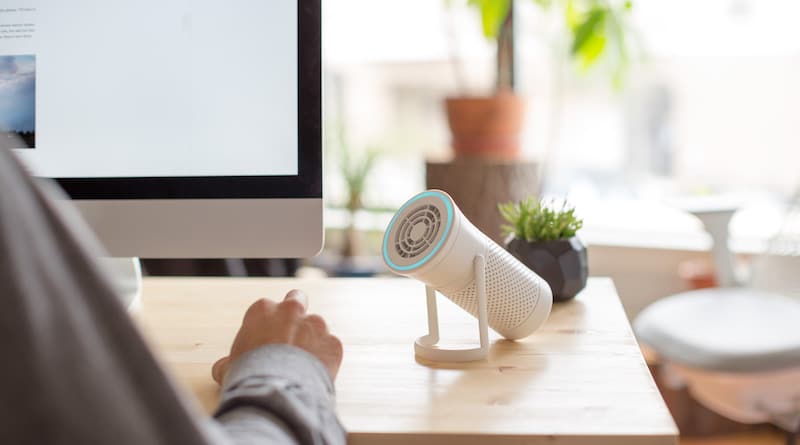 We spend a lot of time worrying about the quality of air outside, but it’s inside that we should really be concerned about. Air in our homes and offices can be much more polluted than outdoor air even in large cities.

Essential reading: Review – Wynd, create a bubble of clean air around you

With hundreds of air purifiers on the market, it is not easy choosing the right one. The latest gadget to hit the market is called Wynd Plus. This is a portable, bottle sized device that differs from the competition in that it doesn’t purify all air, just the air around you. It does this by using a clever combination of a detachable particulate matter sensor, cylindrical shaped purification unit and accompanying smartphone app.

The device comes from an outfit called Wynd Technology. Having raised over $600,000 on Kickstarter to develop the product, the gadget is now available for purchase to all. In my review, I found Wynd Plus to be a really well thought out product. A lot of work has clearly gone into packing lots of great functionality into a small package.

To find out more about the background to the product and where the company is heading, I spoke to Ray Wu, founder and CEO of Wynd Technology.

We initially designed the small form-factor purifier (which eventually became Wynd Plus) to help one of our team members clean the air for his infant daughter. She was very sensitive to the environment and while they were traveling overseas, they were in an area with intense air pollution and she started coughing and her skin developed rashes.

Our hardware guys all went to MIT and they were used to tinkering, so we quickly prototyped a portable purifier that was powerful enough to use next to her wherever she went. Soon other parents wanted us to make these same prototypes for their children, and for themselves as well! All-in-all we made over 50 prototypes for beta users and received a lot of feedback to improve the design.

Behind all this air purifying magic is a medical-grade air filter capable of purifying particles 0.3um (1 / 210th the average thickness of human hair), and above. The filter is lined with an antimicrobial layer lined with silver to keep it clean from microbes such as bacteria and mould.

Essential reading: Improve the air in the home with these gadgets

But Wynd Plus is more than just an air purifier. The device has a detachable tracker that serves as an intelligent personal air quality system that alerts you when the air around you is unhealthy. The company says this is the smallest particulate matter sensor on the market.

What we then discovered is that since air is usually invisible, having a purifier only is not enough. We need to match the portability of the purifier with an air quality sensor that can monitor air quality in real-time, generate alerts, and work with the purifier to automatically clean the environment.

We initially wanted to just buy an air quality sensor from someone else and integrate into the Wynd Plus device, but what we found is that most sensors are either too expensive and too big, or too inaccurate. Rather than be resigned to use a sub-par sensor for Wynd Plus, we invented our own. What eventually became the Wynd Air Quality Tracker is the smallest and most accurate consumer air sensor in the market, and it pairs naturally with the Wynd Purifier to maintain a clean environment.

The benefit of having an integrated air quality monitor with the air purifier, is that you can toggle the settings so that the air purifier works only as hard as it needs to. No buttons to press. The system automatically monitors the quality of air around you and cleans as needed.

The information on air quality is logged and can be viewed on the device itself via the colour coded lights or in more detail in the accompanying smartphone app. Each air quality tracker also acts as a node in a larger network of environmental sensors, helping to provide a larger, crowdsourced view of air quality within a neighborhood or community.

Lastly, we wanted to add the power of data and software to complement the two hardware devices we invented. Through the Wynd Plus and Air Bubbles mobile apps we developed, users can gain more insights about their air quality and device. The bigger idea is to one day combine crowdsourced environmental information from all of our users to help inform whole communities to make healthier decisions about their environment!

When it comes to health, we are all aware that we need to eat right and keep fit. But the importance of breathing clean air can often be overlooked.

On average we take 20,000 breaths a day, and just as important as air, water, or food, we need clean air for healthy living. Air that is filled with allergens, germs, or even air pollution can reduce our quality of life and even cause long-term problems. For example, air pollution can increase the probability of childhood asthma by 40% or lead to a 83% increase in the probability of stroke. There are already many companies focused on more organic food or better water purifiers, but we wanted to focus on air quality which is often overlooked. Moreover we spend 80-90% of our time indoors, so focusing on indoor quality was important to us from day one.

Our product helps make users more aware of their air quality, and furthermore we not only generate data or alerts, but automatically take care of the problem.

Wynd Plus is primarily designed for cleaning the area in your personal space, up to three feet around the device. My impression after using the product for a few weeks is that it is very likely to appeal to those with desk jobs. The device is portable, though, so you can carry it with you, keep it in your car, purse, etc.

Our users include anyone who is bothered by air quality issues for themselves or their family. Air quality contaminants include allergens, germs, and air pollution – and as these are global issues our Wynd community is spread out all over the world.

There are moms who use Wynd Plus for their children, people who place Wynd Plus next to their bed for a more healthy sleep, professionals who use Wynd Plus on their desks, drivers who use Wynd Plus inside the car, or travelers who bring Wynd Plus with them to clean the air on planes or in hotels. One of the core differentiations of Wynd Plus is that it’s flexible enough to monitor and generate clean air wherever the user goes, and we think as a result the user can live a less inhibited life whether at work, home, or on the go.

We are really grateful to the Kickstarter platform as well as to the community that came out to support us. We wouldn’t have gotten to where we were without all of that, and we would definitely consider going back to this well of support for our future products. Our team continues to communicate to all of our crowdfunding supporters and from day one feel an obligation to make them proud.

It is fair to say Wynd Plus is pretty unique in terms of what it does. Right now, there is very little in terms of direct competition out there.

We don’t have a direct competitor because there’s no one that really is as comprehensive and vertically integrated as we are. Wynd Plus is actually three products that work together as one – there’s a unique purifier that is small enough to take with you but powerful enough to clean your personal space, the smallest but most accurate consumer air quality sensor, and software that includes one of the largest air quality networks.

The purifier, sensor, and software + data which we created all work together to create a product experience that is so much more than any one of them alone. While we have competitors in each of these spaces, no one has integrated them as much as we have.

While the device itself works flawlessly, I did find the accompanying smartphone app to be a rather simple affair. It does provide the basics mind you. But it seems that more software and even over the air hardware updates are in the pipeline.

Since we first shipped out Wynd Plus units in May, we’ve released multiple software and firmware updates which have added additional features to the devices. We have some exciting updates in the coming months and will announce them as soon as we can.

We aren’t ready to announce any new products yet, but have already been working on a product roadmap which we will be excited to announce when the time comes. We will be providing over the air updates to the hardware (not unlike what Tesla does) to unlock additional functionality over the coming months, so both existing and new users to the Wynd community can look forward to that!

Air pollution has become an inevitable part of daily life for many of us, and this can have negative short term and long term effects on our health. Primary affects are on the respiratory and inflammatory systems, although continued exposure can lead to more serious conditions such as heart disease and cancer. But it doesn’t need to be this way.

People are growing increasingly aware of how to stay healthy, by eating better and more natural foods, drinking cleaner water, and breathing healthier air. As more people move into cities where there is less nature, more industry, and more smog, we think it’s important to enable healthy environments so users can live freely, be unencumbered, and work on achieving their dreams.

We are a team of MIT engineers and designers who want to combine science with functional and intuitive design so we can ultimately help people live healthier. It’s important to invent and engineer, but we also take design very seriously so that people can enjoy Wynd Plus and what it offers for a long time.