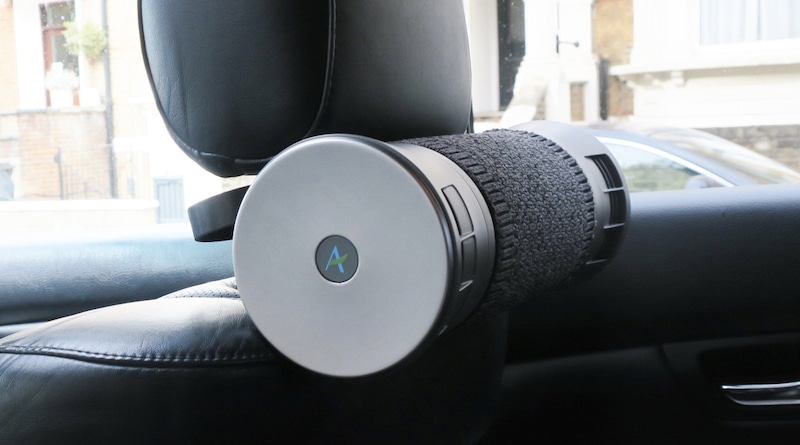 Airlabs is a London based team of atmospheric chemists, airflow engineers and designers dedicated to fight the impact of air pollution. The company’s mission is to reduce people’s exposure to unhealthy air by creating clean air zones in the world’s most polluted cities.

Essential reading: Improve the air in your home with these smart gadgerts

Airlabs has just launched a Kickstarter campaign for its first consumer product to help protect families. It is also the first product of its kind to clean air pollution (both Nitrogen Dioxide (NO2) and Particulate Matter) from inside your car. The company says Airbubbl removes more than 95% of NO2within 5 minutes!

This is a very small outfit with a very big mission and drive to protect people. We sat down with Airlabs CEO, Sophie Power, to discuss the issue of air pollution and the company’s product launch on Kickstarter.

G&W: What is the Airbubbl?

The Airbubbl is the first proven technology that removes Nitrogen Dioxide and all other pollution from inside cars. It creates a bubble of clean air inside your car that protects you and your family from toxic air pollution that comes through your air inlets, especially from other vehicle’s diesel emissions.

How does the Airbubbl work?

The Airbubbl works by drawing polluted air from inside the car cabin into the middle of the unit which houses Airlabs’ proprietary filtration technology and our highly effective particle filter.

How did you come up with the idea for the product?

Knowing Airlabs had the only proven technology that could effectively remove health harming Nitrogen Dioxide, we knew it was our duty to develop the Airbubbl to reduce exposure in a key pollution hotspot – the inside of car cabins. We hope our product not only helps reduce the negative effects of pollution exposure but also brings increased attention to air quality among urban citizens and families.

What makes Airbubbl different from the competition?

The Airbubbl is the only in-car air cleaner that effectively removes Nitrogen Dioxide from the air. We conducted laboratory tests in London in October 2017, and found that Nitrogen Dioxide levels spiked while sitting in traffic. Within 3 minutes of turning Airbubbl on, it reduced NO2 concentrations in the car by 67% and within 10 minutes NO2 was reduced by more than 95%.

What do you see as your biggest challenge?

Air pollution is the world’s greatest environmental threat to our health. The biggest challenge we face is the lack of knowledge of the problem around air pollution exposure and the feeling of being in a safe haven while in your car. We are working to create awareness but it is something that must be a joint effort between both the public and private sectors, together with citizens to spread awareness on this major issue!

On a more general note, where does pollution come from?

The air inside your car is only as clean as the exhaust from the car in front. Your air conditioning doesn’t remove pollution – it brings it into your car! The Airbubbl filter systems removes the key elements of pollution including Nitrogen Dioxide, VOCs, particles, bacteria, viruses and odours. The main source of Nitrogen Dioxide in cities is burning diesel fuels from cars.

So what can we do to protect ourself?

Active transport is safest: Walking has many health benefits, including being able to avoid pollution on busy roads which is proven to reduce exposure by 30-60%. If you live in London, plan your routes, look at online pollution maps for your area and avoid busy roads.

Avoid hotspots: Air pollution levels can change significantly within only a few metres. For example, walking on the building side of a pavement versus the roadside can reduce exposure by 30%. Especially if you have a child in a buggy, who is breathing more polluted air closer to the ground, keep back from the roadside when waiting to cross the road or for buses. Other hotspots include taxi ranks and high particulate readings have been found on the deeper tube lines (e.g Northern, Victoria and Central).

Reduce your impact on others: Emissions from cars idling can be very high and concentrate in hotspots such as school drop offs. Reducing car usage is the best option, but if you have to drive be considerate of others and switch your engines off when stopped.

Follow pollution levels: Pollution levels change day to day in the same places – mostly based on the weather. The Met Office and London Air Network forecast this so download the apps on your phone for updates. When levels are high take extra care to avoid outdoor air pollution and if exercising, try to avoid peak traffic times.

Be aware of those most at risk: The younger the child, the higher the impact of pollution but high risk groups also include the elderly, babies in the womb and asthmatics. For these groups make sure you double the efforts to reduce exposure. Asthmatics suffer short term effects from spikes in air pollution as they feel the effects at lower levels so need extra care wherever they are.

Is this your first product on Kickstarter? Why did you choose to go down the crowdfunding route?

This is our first consumer product and first product on Kickstarter. We chose to use the crowdfunding route as a way to gather interest around the product and validate its marketability. You can learn more about the Airbubbl or support our campaign here!

Where do you see this technology heading in the coming years?

Personal air cleaning is one of the many facets of Airlabs and our technology. We also produce street furniture to create clean air zones in cities and aim to continue our development to one day create clean air streets or neighbourhoods. This is an issue that is significant for 92% of the urban populations around the world so there are many people that can benefit from the further development of our technology and products!