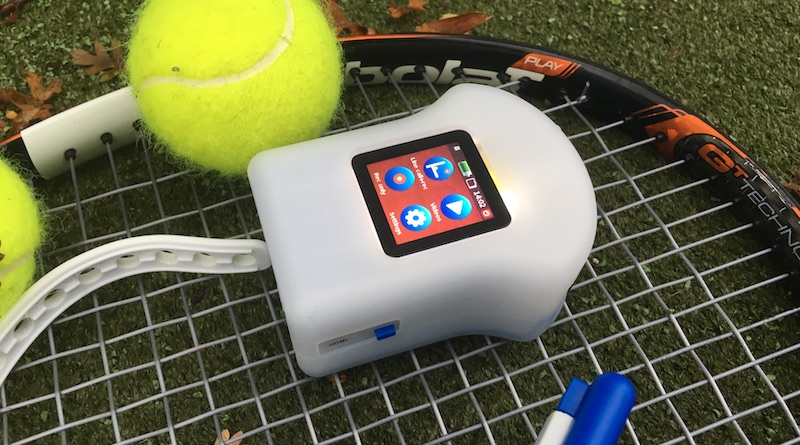 I wrote about 8 months ago about a product called In/Out. The GoPro like device can be fastened to any tennis net post to act as your own personal hawk-eye system. It does this thanks to the same algorithms that provide line-detection for self driving cars.

But that’s not all, In/Out also detects let serves and provides detailed stats analysis. For each shot, the gadget will track the ball speed, spin and location with 99% accuracy. Further analysis will show shot placement with percentage by zone as seen on TV, calculated for both players.

The $200 gadget has generated quite a bit of buzz in the tennis community and demand for the first batch far outstripped supply. Beeing a bit of a tennis geek and a tech lover, I jumped at the chance to contribute. In fact, I was one of the earliest contributors so was pretty much first in line to receive a unit.

The wait is now over and I have in posession an In/Out. These are my early impressions. 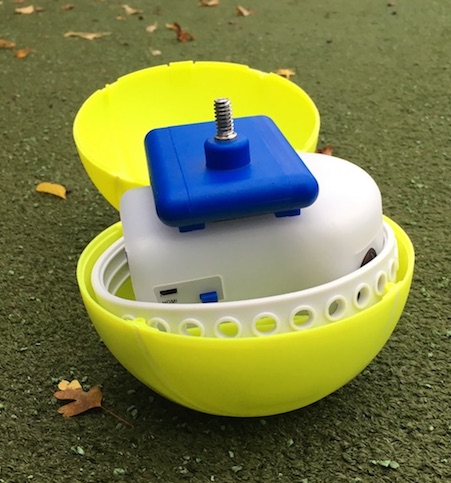 If you are expecting fancy packaging and detailed instruction booklets, think again. In the mail you get a plain box with an oversized plastic tennis ball and no instructions. Mr Gregoire Gentil, the inventor of the device, perhaps had bigger things to worry about than making sure the packaging looks nice.

Luckily it gets better – in fact it gets much better. What it lacks in presentation, In/Out makes up for in the quality of hardware and software.

In addition to the plastic tennis ball enclosure, you also get several pieces of kit: the In/Out device, L-attachment (along with 4 little feet and band), micro USB cable, battery, and an HDMI micro adapter (donors only). Early contributors also receive a free 8MB microSD card. Thanks Mr Gentil!

What struck me right away was the quality of the main unit. It looks, feels and operates like an extremely well designed piece of kit. Much more so than I hoped. Lots of work has clearly gone into putting it all together. Once you switch it on via the physical button on the right, it feels like you are turning on a small computer. The high-res screen springs to life, and the gadget has its own operating system and menus which you can navigate via the touchscreen.

The setup, though, is not as simple as it could be. As there is no instruction booklet you need to head over to this page on the In/Out website which outlines all the steps in detail.

The battery slots in and to start off you need to charge it to its full capacity via the micro USB cable. The red light goes on. When the battery has finished charging, the red led goes off. The battery runs more than two hours in line call mode, and one hour and half when recoding or streaming 1080p video. This can, however, be extended by plugging in a power bank which as I found out later on works seamlessly.

Then it was time to head over to the tennis court and try it out.

At this point its worth stressing that while the hardware is the finished product, the software isn’t. In fact, this is still a beta version of the software. Mind you, it doesn’t feel like a beta version, but it is missing some important functionality. Right now you can only video record your sessions, use the ‘Practice Session’ setting for line calls and practice your serves in the “Serve Training” mode. 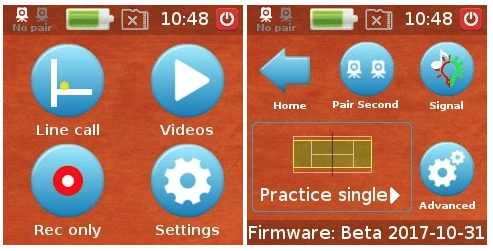 I decided to keep things simple to begin with and try out the video function. One press of a button is all it takes. You can save the video to the internal memory or slot a microSD card in. Once you are done just tap the off button on the screen and the recorded video will appear in the In/Out menu. You can then scroll through all your saved videos and watch them back. However, despite being high res, the In/Out screen is a bit too small to see much detail. 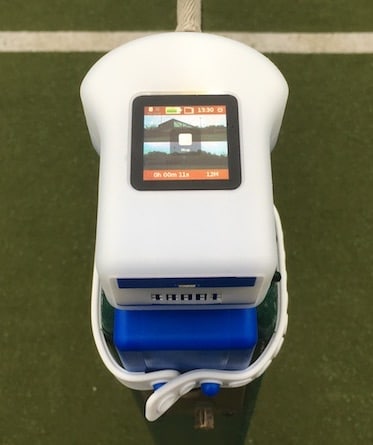 Back home I slotted the microSD card into my computer and uploaded the recording. The video is in high res and its split into two parts – the top part shows one side of the court, the bottom part the other. This means you get a recording for both players and both sides of the court simultaneously. The quality of the recording is top-notch and it makes it easy to spot the nuances of your form. All in all an extremely useful function which I can see myself using both in match-play and practice sessions. So far so good.

Right now the stats overlay does not work, but in the coming months your ball speed, spin, location and more will be superimposed on top of the recording. During match play, the gadget will also provide efficient replay – meaning it skips the changeover and towel timeoffs. How cool is that!

Then it was time to test out the line calling system. That was, after all, the big selling point and In/Out’s claim to fame.

The gadget can work on any court – hard court, carpet, clay, grass – as long as there are a few white lines and the lighting conditions are ok.

Before starting play you need to calibrate the court, i.e. give In/Out a chance to detect all the lines. To set up click on ‘Line Call’ making sure the angle of the In/Out device is such so that both sides of the court are in view. You also need to make sure there are no people or balls in the way. Then click on ‘Find Court’. The device will attempt to detect the court lines. If it succeeds, the message “Court found” will appear.

To my frustration, the first time around it was not successful, but then I realised that I did not position the cameras properly. A quick adjustment so that all the lines were visible, and it managed to calibrate the court with no difficulties. I should add here that it had just stopped raining so it was a very dark, cloudy day. Not a problem. Later on, I found out its slightly more tricky to get it to detect lines on a clay court. You really need to make sure all the lines are dusted off.

The big question, of course, is – does it work for line calling? The answer is – yes it does. Is it perfect? No. The system is learning and its still in beta stage. But its already pretty good. The unit will flash green when the ball is in, and red when its out. There are also optional sound settings.

It will make the odd mistake, for example, when the ball lands right on, or very close to the line. On one or two occasions it got confused when I was walking around and called shots in even though I had not even hit a ball! Mr Gentil is stressing that at this early stage the system is still ‘learning’ and the algorithms are being updated. In the coming months, a final version of the software will be rolled out which will bring with it much better accuracy. We’ve had 4 firmware updates just in the last two months and more are expected in the coming weeks and months.

A very cool feature is that the In/Out screen shows where the ball landed for the last ten shots. And this works flawlessly. You can use the left and right arrows to select a particular shot and click on the screen to see a replay of where the ball landed. The screen zooms in on the ball, just like a TV broadcast when a professional tennis player makes a challenge. Then if there is a dispute, both players can watch the replay and decide whether the ball was in or out. My opponent watched in amazement as I showed him instant replays of shots. 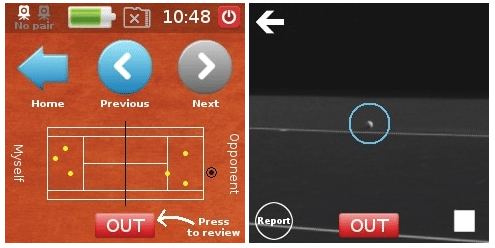 I will be taking In/Out for more tennis sessions in the coming months and will refresh this review as new features are rolled out. So keep checking back as I will be updating this article.

At the moment its fair to say the line calling function is more of a novelty. There are plenty of times the gizmo doesn’t even read a ball bounce and it can make some pretty big mistakes. But it gets it right a lot of the time, too. The potential is definitely there and I enjoy being an early adopter of the product.

Think about it. It really is the stuff of magic that the unit is intelligent enough to detect the two players running around on the court, pick out the ball flying across the net and landing on the ground, and then determine which side of the line it landed on! Welcome to 2018. And its only going to get better from here.

The end goal is for the system to operate with a margin of error of 20-30 millimetres, and its already pretty close. While this may not be precise enough for professional tennis players, it is perfectly acceptable for a Sunday tournament match, recreational play or a junior tennis match. Plus there is the replay function which allows players to decide for themselves whether a ball was in or out.

My guess is that it will take another 3-6 months for the software to be 100% complete. But that’s purely a guess. It could be sooner, it could be later.

In my mind I imagine Mr. Gentil as a geniuous inventor, perhaps the equivalent to “Doc” Brown, the inventor of the time machine in the Back to the Future trilogy. But a Palo Alto scientist with a basement tool shop who is also a tennis geek and has put his skills to resolving frustrations many amateur tennis players face today.

In all honesty I wasn’t sure what to expect as the device did sound like the stuff of science fiction. But I am extremely impressed with the initial result. It is my view that Mr. Gentil is building a device that he would want to use himself. And this is why it has so much potential.

I don’t want to sound like a cheerleader, but a gadget that continuously records high-res video of both sides of the court, overlays statistics on top of the recording and even makes line calls with optional video replay – is literally a game changer. I’ve tried everything under the sun when it comes to tennis technology, and this is the gadget that has me most excited. Particularly now that I have used it.

The hardware is there but it will be a bit of a wait for the software to catch up. But when it does, don’t be surprised if you start seeing lots of In/Outs strapped to tennis posts of your local courts.

In/Out has recently re-opened its store with new stock. The price has been bumped up to $229 which is still very reasonable considering the specs. Some small hardware adjustments have been made to the second batch so that the device is more reliable and the shipping packing is stronger and more robust to shocks.