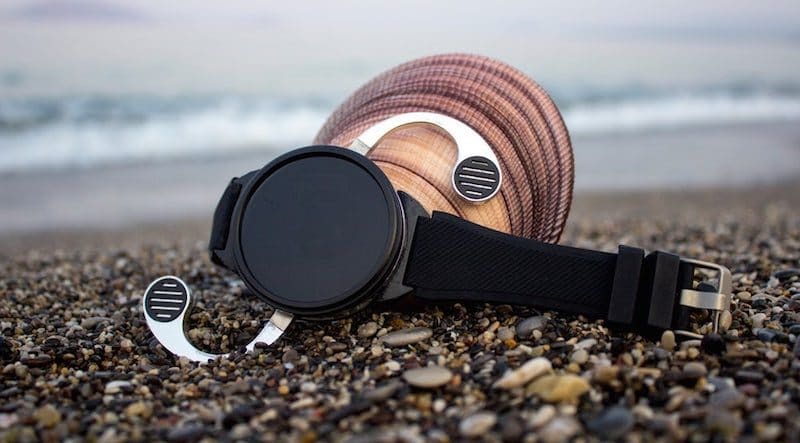 Why lug around both a smartwatch and smartphone? Wouldn’t it be better to do away with one of the two? This is the thinking behind Shell, the world’s first smartwatch that transforms into a full-scale smartphone.

Due to launch on Indiegogo at the end of this month, this one of a kind device offers 4G connectivity, an extendable handset, a 360 degrees rotating camera and a water-resistant design. Furthermore, the company has developed an interesting, manual charging solution powered by the energy from your hands.

By default this multi-purpose device nestles in its cradle and functions like any old smartwatch. When you want to use it as a phone, just remove it from its cradle. The flexible ‘wings’ will automatically pop out, one side containing a mic, the other a speaker, and both an antenna. Then simply use the device as you would use a smartphone. You get full standalone 4G, GSM, GPS, WiFi, Bluetooth connectivity and radio communication on the company’s Commando units.

Apart from its rather unusual design, the other unique feature is the manual charging. If you’re in the need of a little more juice, you can use its internal dynamo generator by repeatedly flexing the handset ‘wings’. Each minute of flexing gives you an equivalent amount of talk time. Along with a tiny workout!

If you wish to take photos or shoot a video, the top wing contains a 12 megapixel camera that can be rotated 360 degrees. The gadget also fits most selfie-sticks.

There will be two distinct designs to choose from. The regular and the rugged Commando version for those that lead a particularly active lifestyle. The company is also looking to bring some of these benefits to existing smartwatch owners. It plans to create custom smartphone cradle for a number of devices, including the Apple Watch, Samsung Gear, LG, Moto 360 and Huawei Watch.

Check out the video below for more information.