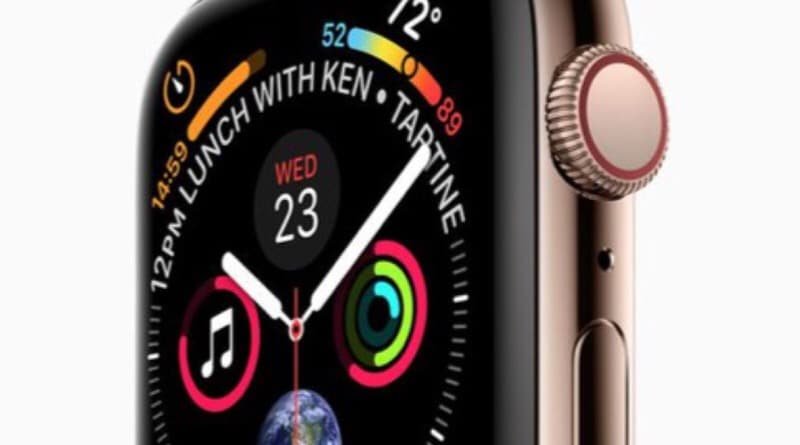 A new leak may have just revealed the first image of Apple Watch Series 4.

Courtesy of 9to5Mac, the pic shows design tweaks that were largely anticipated. The most obvious of all is the new edge-to-edge display. Apple was rumoured to be working on a screen that is 15% larger than on Series 3. The dimensions of the device remain the same but the bezle size is drastically smaller allowing for the increase.

The larger screen real-estate means Apple can now show more information on the watch face. As you can see from the image above, the Cupertino outfit has managed to squeeze a total of eight complications – four around the time, four within the clock hands. That makes for one busy watch face! It is likely Apple has designed a plethora of watch faces to go along with the new display.

Another design tweak is the hole between the side button and Digital Crown. 9to5Mac speculates this is to accommodate an additional microphone. The Digital Crown and side-button appear to have been revamped as well. Thankfully, the peculiar red dot is gone. Many would agree, it was a questionable design choice. As the dimensions are the same, we assume old watch bands will be compatible with the Series 4 device.

Nothing was revealed on other specs. It is anticipated the watch will benefit from improved fitness features, better processor and a boost to battery life. None of this has been confirmed, though.

It won’t be long before we find out. Apple will officially announce the Watch along with its new iPhones at its annual special event on September 12th.